What Is Pipe and Drape? Read All About It!

Home/Education, Products/What Is Pipe and Drape? Read All About It!
Previous Next

What Is Pipe and Drape? Read All About It!

Perhaps you have heard the terms “pipe and drape” or “pipe and base,” but you aren’t clear what these terms mean, or how pipe and drape works. Not to worry – we’ve got you covered.

With a slipfit system, such as the system that we offer for purchase or rent, each upright is attached to a base via a pin and screw assembly.  The uprights, which may be standard (fixed length) or adjustable, have one or more sets of 4 slots, positioned every 90 degrees.  The telescopic drape supports, which have hooks on either end, fit into these slots. The configuration of 4 slots at 90 degree positions, allow you to attach up to 4 drape supports to each upright (such as when configuring multiple booths side-by-side and/or back-to-back).

Shorter uprights have just one set of slots, while 6′ or longer uprights have two sets of slots (one at 3′ from the bottom and one at the top). This allows you to create a booth with a higher back wall and shorter side walls, such as this. 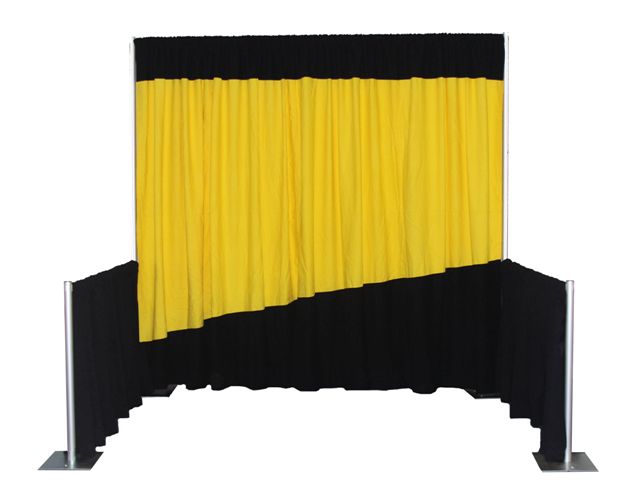 Typically drapery is made as flat (unpleated) single width panels (typically 4′ to 5′ wide, depending on the fabric), with 3 to 4 panels used for every 10 feet of drape support width, to allow for natural fullness. These drapes generally have an open 5″ top hem to allow the drapes to be threaded onto the drape support. Banjo Cloth is the most common economy choice for exhibit booths, but other fabrics, such as 15oz Encore, are often selected when greater opacity is desired. Custom drapery is also an option for those wanting something different, with a multitude of  drapery style possibilities ranging from pleated drapes to digitally printed backdrops to non-operable Austrians and more.

Although pipe and drape is most commonly used for exhibit booths, it can also be used in many other applications. Here are just a couple of examples: