LinkedIn and Likin’ It!

It took some convincing – and days upon weeks of “remembering to log in and check” – but I can now say that I have met this electronic business world head on and the LinkedIn network seems to be a part of our company-wide day to day at this point.

While it by no means trumps my regular outlook inbox traffic of emails….. the LinkedIn Network email system provided certainly has become a daily means of communication – in particular between those that aren’t yet “in the fold” per se as a vendor or client.  It’s a great non-confrontational means of connecting, and I find that new vendors who approach me thru the LinkedIn personal email system have 100% better chance of me paying attention to – or even receiving – their email.  As indeed the spam filters that filter out new contact efforts thru the main emails addresses aren’t filtering the LinkedIn mails!

SO – with all that said – it is a great resource – I am meeting new potential suppliers and have even met a few new potential clients.  While I am not that active with the outbound messaging, I am paying attention to the inbound.

For those who are” LinkedIn”: you can connect with me here: https://www.linkedin.com/in/meganduckettconcertstagedrapes

Or please follow and visit our company page on the Network for news and product updates here: https://www.linkedin.com/company/sew-what-inc

I am learning SO much about social media – coming from an old school mindset, where being social meant actually having a conversation with someone – this new world of social media – with tweets, texts, emails and “social posts and updates” – is just completely out of my skill set.

And so we connected late last year with MARGIE HANSON of Today’s Way, Inc.  – who helped get myself and the others on staff who felt a bit squeaky in the field – up and running in this new “social” world that is tech based rather than talk based.

So we are working our way thru it and enjoying the adventure.  The relationship between social sites such as Facebook and Google Plus, and sharing sites such as Flickr and YouTube, is just fascinating.  We are working hard at staying true to brand, true to beliefs and also meeting up with our friends, vendors and clients where they are posting and reading.

So interesting too is the opportunity to learn about our clients and vendors (and the others in our sales space, too!). Things I would never have known if I had not taken the time to read their bios on Linked In – or checked out their favorite videos and books on their Facebook page.  Frequently caught off guard as I learn new and surprising details of interest about my new tech savvy friends – “Well, I never! – who’d have thought?”

Indeed – they may think the same of me – as they land on a page only to learn that I have been stitching up a storm now for well over 17 years, or that we have in fact 2 companies (rentals and sales) or that I sing in a band.  “Who’d have thought?”  Indeed!

Well, we haven’t embraced all the avenues yet – but we are working our way thru each layer as we learn how they all work and interconnect and to whom we can speak and connect with on each platform.

So for now – you can find us here:

(on this blog of course!)

Won’t you join us? Say hello or share a story, too!

And here too are the social links for Margie Hanson – in case you need some social assistance too!

Thanks to an infusion of energy and some great guidance by Randy McKinley of CMTC, there have been lots of changes going on here in “What?-Ville”.

Indeed – it is starting to look more and more like a village!

We have just finished installing some beautiful cabin-style offices on the factory floor – part of our effort to integrate processes at both the sales and manufacturing levels. Brand new super modular construction, the lucky employees moving to their own cabins include Andrea (Printing Department Manager) Marianne (Logistics Manager) and Rick (Warehouse Manager and Master of all Company Miscellanea). These creative new spaces are adorned with big windows, air conditioners and heaters, bright lighting and lots of natural light, too. Brand new shiny office furniture is on order – and with the freshly laid carpet already in place, we are moments away from making the transition…….. Can’t wait!

Other great improvements have included an updated phone system – now with phones in the right places – and not in the wrong places…. (Has anyone else ever outgrown their communications systems?) We also have lots of super fast server storage, are networked throughout thanks to our preferred supplier DELL computer, and have all the techy (and non-techy) bells and whistles (including a ships bell in the lobby to greet any guests that might wander our way into the depths of this Rancho Dominguez Village.)

Some major process changes over the last few months are now starting to deliver as promised….. A combined shipping department servicing both rental and sales shipments – and the same for our receiving department. This new blended formula now delivers a speedier and slicker service to our WILL CALL and delivery clients. No longer two companies under one roof – we are now one company offering two services…. with a single point of contact.

In looking back over the last 17 years, I might equate the growth of our business to often mimicking a “bad extension” to a home…… First you add a bedroom, then a bathroom, then blow out a few walls, and before you know it you are eating in the garage and have to walk thru a bedroom to get to the powder room. Well, we had certainly grown in some hazardous ways – but this thoughtful reconfiguring of the warehouse, the processes and the attitude towards production has us all feeling great.

Change is as good as a holiday. 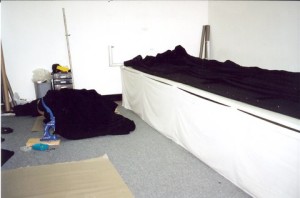 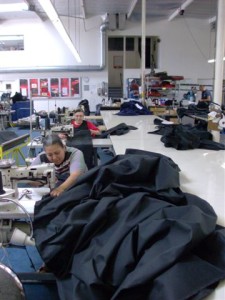 Regular readers of this blog may recall that More Magazine featured the story of how Megan started Sew What? and Rent What? in an article in the July/August print edition (new blog readers, learn more about it on my prior blog post).

Well, for those of you who were unable to pick up a copy of the magazine at the time, the article has now been loaded to the More website.  The article is quite interesting – it focuses on how several women (including Megan) turned their interests into successful business.  I think you’ll enjoy reading it.

About a month or so ago, Megan was contacted by folks over at Inc Magazine (you know, the terrific mag for business that sponsors the “Inc 500/5000” awards each year).  They were partnering with Cox Business on an event series called Get Started.  The first two events were held earlier in the year (Oklahoma City and Connecticut).  The next would be here in Southern California (in Orange County, as it happens), and they asked Megan if she would participate.

In times past, Megan has been a speaker at a variety of events for Inc Magazine and other organizations, but this gig had a twist.  “Get Started O.C.” would take the form of a “pitch” session, in which representatives from five local small businesses would “pitch” their product / company to four judges, with an audience composed of local business people. After all the pitches, the judges would vote, and the winner would receive a $10,000 prize package from Cox Business. Megan agreed to be a judge, and she suggested that I might want to attend the event as well.

The event was this past Tuesday Oct 22, and it was both fun and inspiring.  The venue for the event was the Marconi Automotive Museum.  What a cool venue, and how great that it was created to fund a charitable foundation to help at-risk kids! 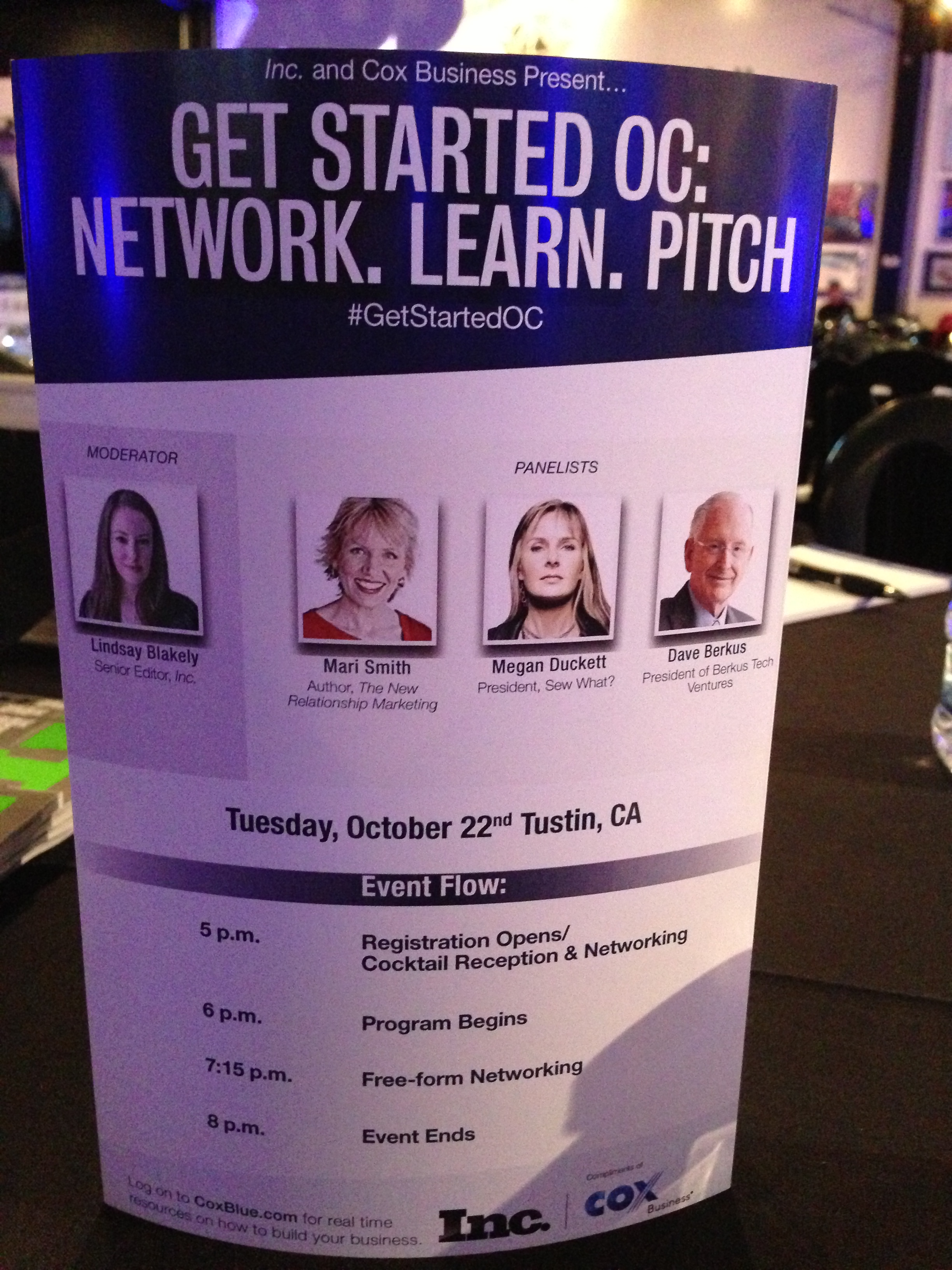 The four judges included Megan, Lindsay Blakely (Inc Magazine editor), Mari Smith (author and social media coach), and Dave Berkus (investment “angel”).   Each person pitching was giving about 2 minutes to tell the judges (and audience) about themselves, their company, and their product.  The judges then had 5 minutes to question that person for further clarification, before time was up and it was the next person’s turn. 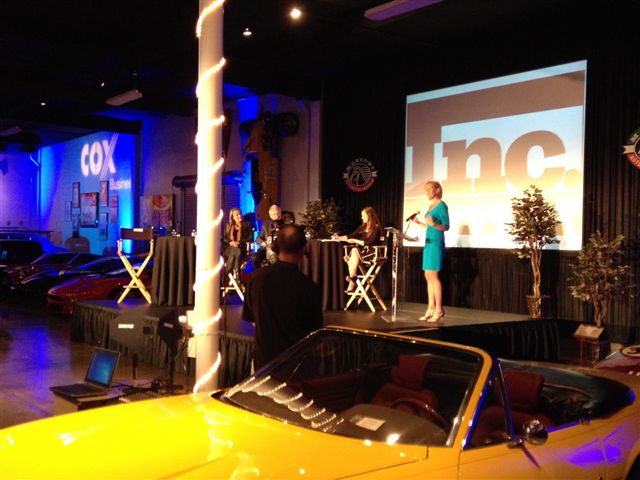 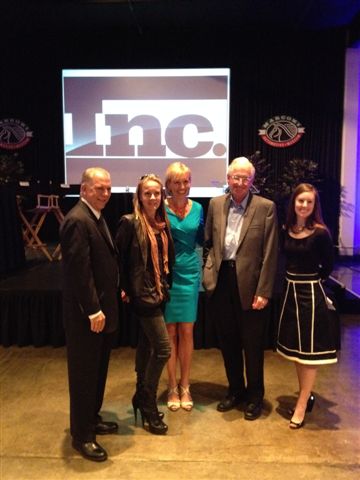 Once all five candidates had “pitched,” the judges votes were tallied, and the winner was announced –  Post Op Tops, a company that makes comfortable apparel for post-operative breast cancer survivors.

This really was a fun and informative event – a bit like television’s “Shark Tank,” but much more supportive in tone!  If you are interested in attending a Get Started event and live in the Providence Rhode Island area, there is an one coming up there next week – Get Started R.I.