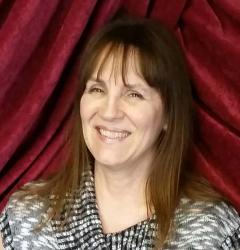 WOW – Who would have thought that a gorgeous, illuminating stage like this….. 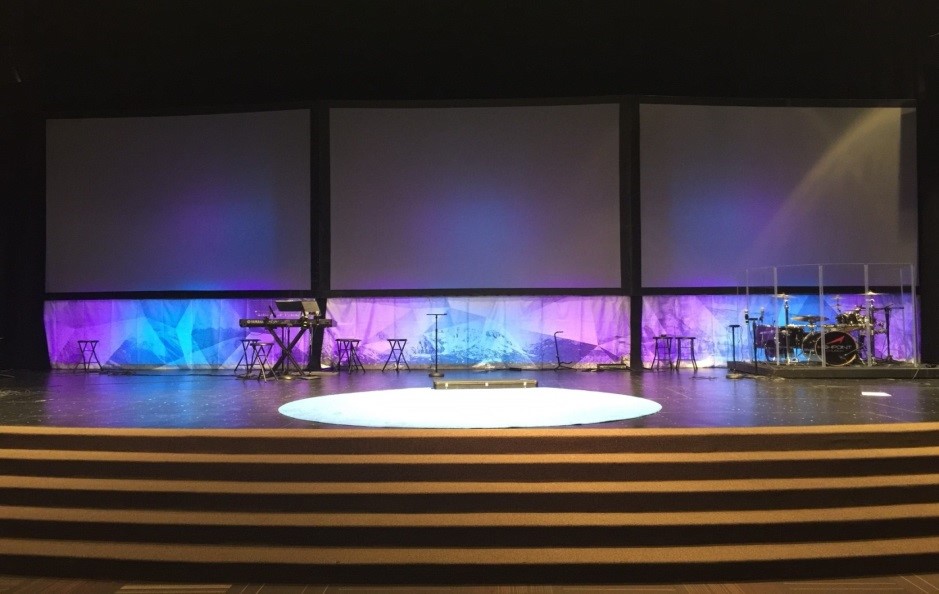 Could have been derived from such a simple image as this…..?

When our clients contact us with custom drapery requests, we always try to make sure we can fully envision what they want the soft goods to look like when they are finished so that we are all on the same page about the end result. This way we can be as sure (as possible) that our custom-built digitally printed drapery will work perfectly with their venue, tour, production, or special event.

But I have to admit, when Caleb McNaughton from Highpoint Church in Aurora, Colorado sent us the above image to be digitally printed, at first I thought they were interesting but wondered why they might want something  so…uncolorful.  I can completely see now! Printed on Crystal Poplin, the excellent translucency of this fabric will allow for a multitude of different moods to be created. By simply changing the theatrical lighting that is splashed upon it, they now have an endless amount of looks and backgrounds for their stage, using the exact same soft goods.  Versatile, Dynmaic, and Brilliant!

Little Big Town is a crowd favorite – and also a client favorite over here at Sew What? Inc.  We are so thankful and honored to have been selected to create unique, branded and seriously rocking backdrops for this popular touring band.

Known for their creative 4 part vocal harmonies, LBT are an American country music group, who have had the same 4 band members since the late 1990’s (actually this is quite a feat!). Reminds us in some ways of ourselves – we have been at it a long time with a tight team – and like LBT we feel that we have found a way to really “do what we do” well.  If you haven’t listened to them, please check into their recordings – or better yet grab tix for their current “Pain Killer Tour“.

Enjoy this showcase with just a few of the various backdrops we have created for Little Big Town under their production team’s guidance over the last few years. ……. I have included a little about each piece and the materials selected.

In this boldly Americana backdrop for Little Big Town, the vintage flag design was designed and made paint-ready by John Rios of John Rios Designs. What makes this piece unique beyond what’s seen under traditional lighting is that the band’s name was embedded within the drop with invisible Ultra Violet paint.  So – when the lights were killed and the UV lights engaged, the bands name glowed in all its glory for the audience to see.  We love to see these dynamic “lights out” effects that utilize our textiles!  The hand painted UV text effect was applied after the drop was sewn and painted with the traditional paints. Scenic artists typically prefer cotton substrates for painting onto – and they are almost always best for UV effects, we find, as the UV paints tent to take to them more effectively than they do onto a polyester – so keep that in mind if you are thinking that a topical UV treatment might be something you have in mind for a drop of your own. 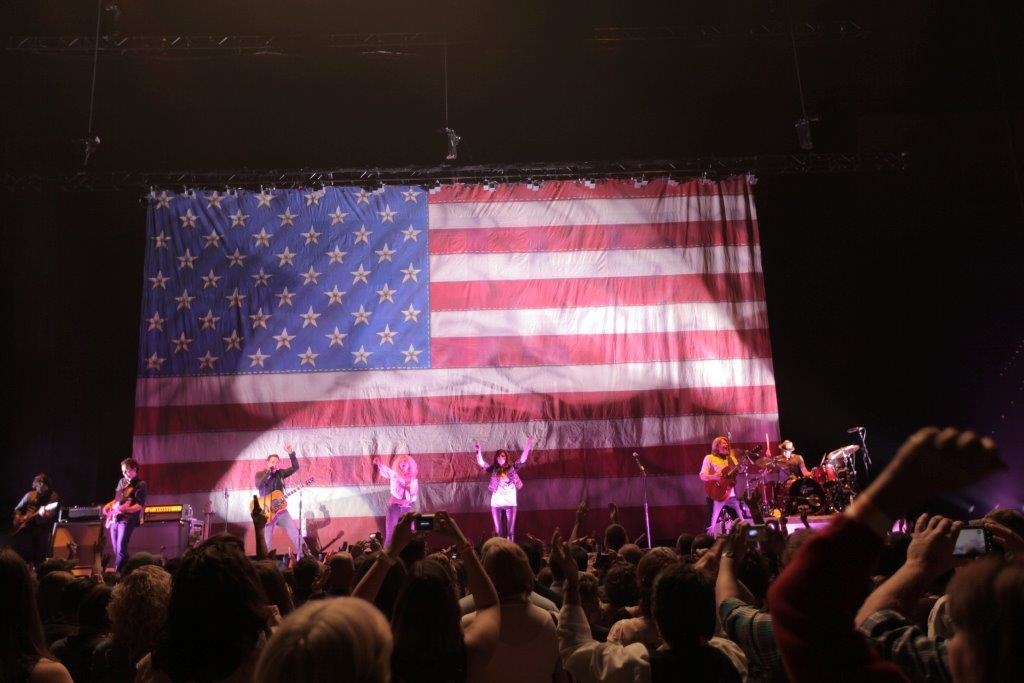 The glowing doves in this backdrop are a topical UV effect – that was applied to a digitally printed 2 color design – created by Raj Kapoor and his team. This was a heavy cotton canvas that we selected for our in house digital printing – and the drop was then hand treated with both a white UV paint over the doves as well as a UV blocker in other areas to add to the variance between the glowing areas and those that dropped out of the scene when lit appropriately.  Matching printed and custom fit stage skirting brought the entire design into reality for a total look. 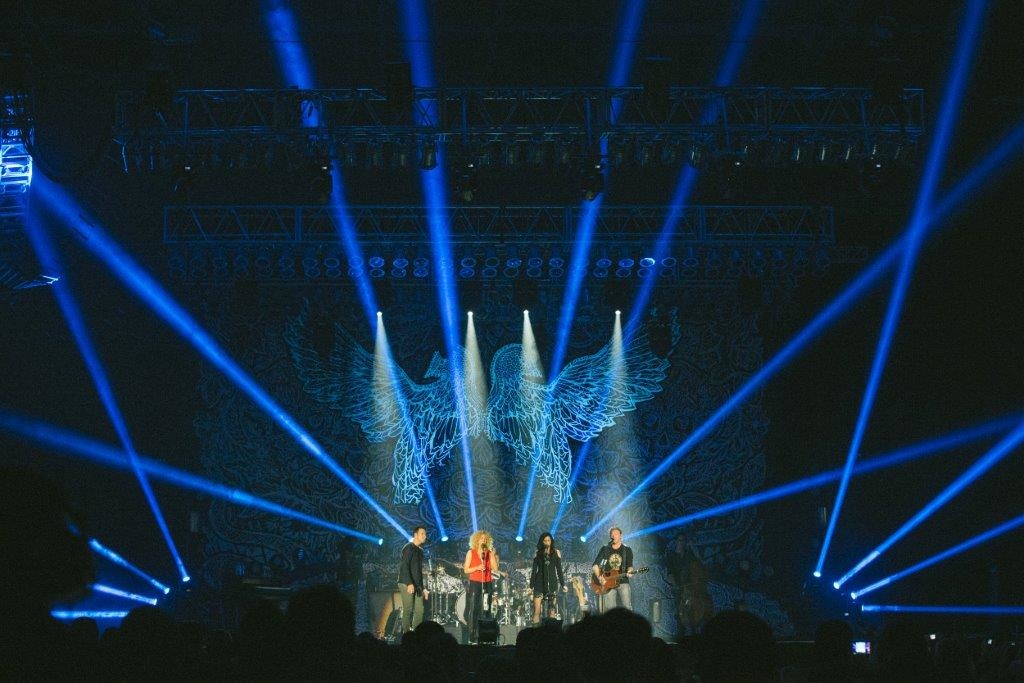 In fact, this very unique backdrop was even featured in the Business Unusual Culture section of Entrepreneur Magazine.  Quite a treat – for both us and LBT! 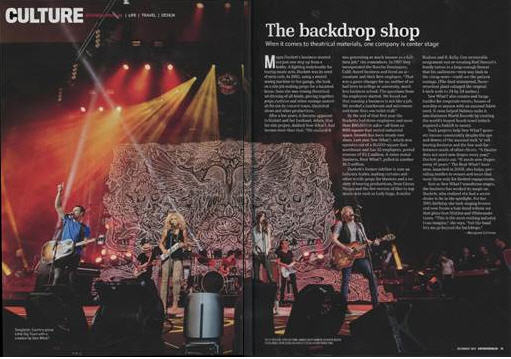 Check out the blend (and amazing visual depth created) when traditional stage drapery is combined with digitally printed “forced perspective” in this “tornado” inspired design by Raj Kapoor and his design team.  The drapery elements hung mid stage were translucent poly silks, which gave both front and back lighting opportunity to the designers, and the digitally printed backdrop which hung just feet from the drapery had a forced perspective built into the art. The effect is that the stage is much deeper that it actually was, and the audience was really drawn into the performance space with the dramatic lighting and the central visual focal point. 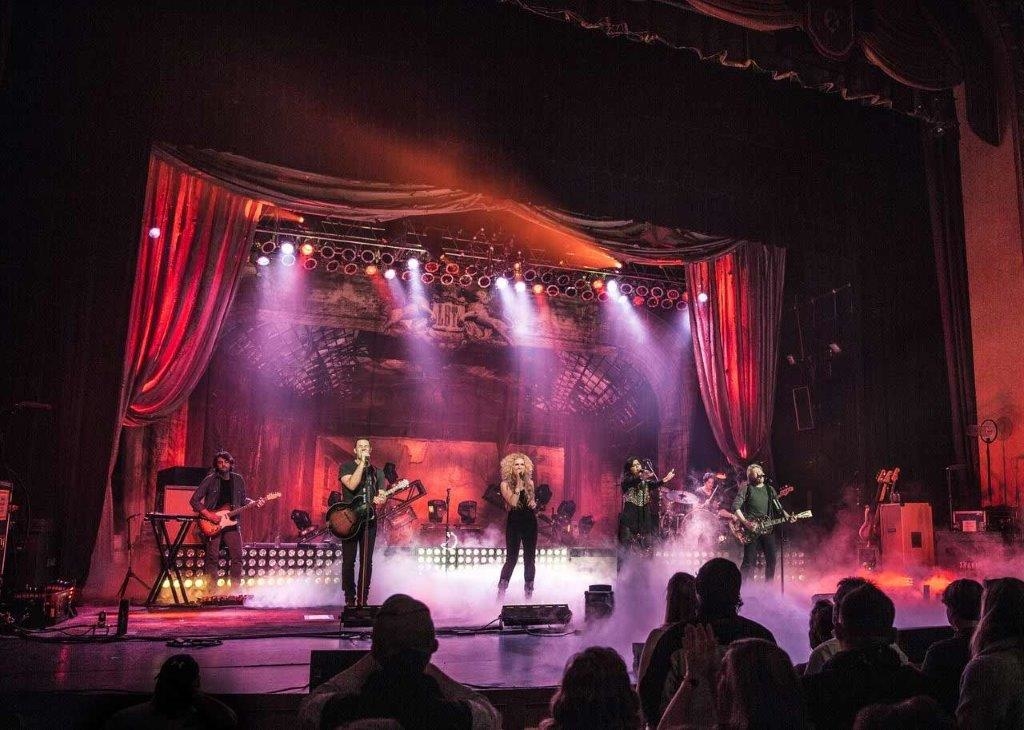 Well – there are more awesome LBT backdrops that I wanted to share – but I will stop right here – and perhaps share a Part Two some time soon. 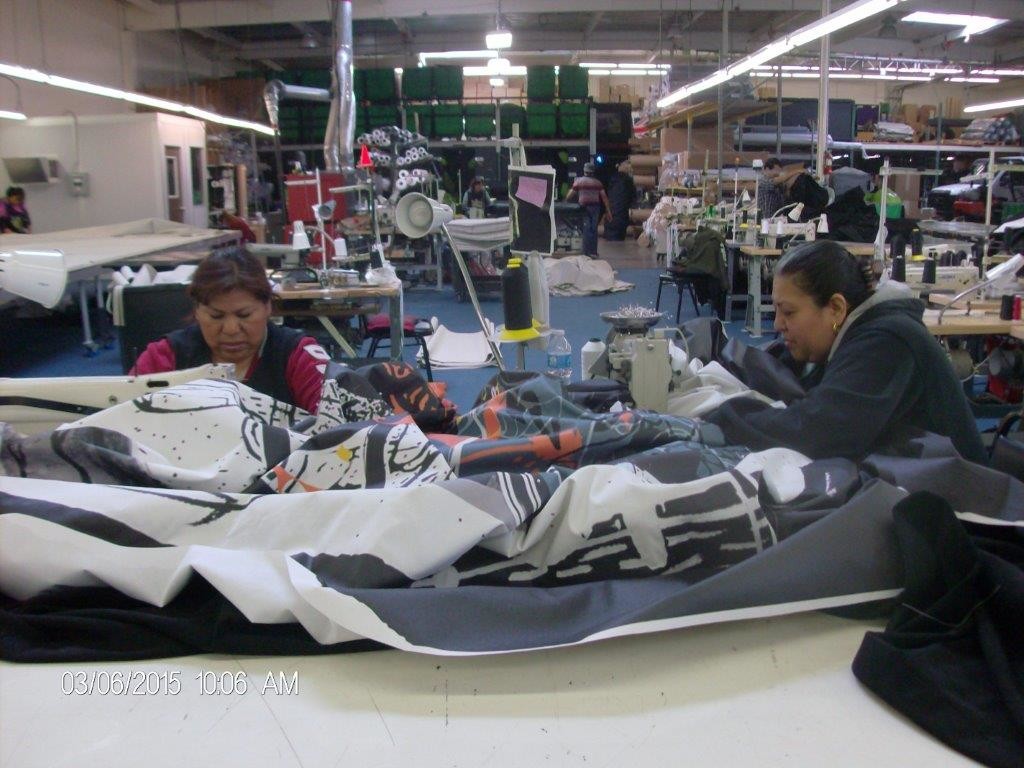 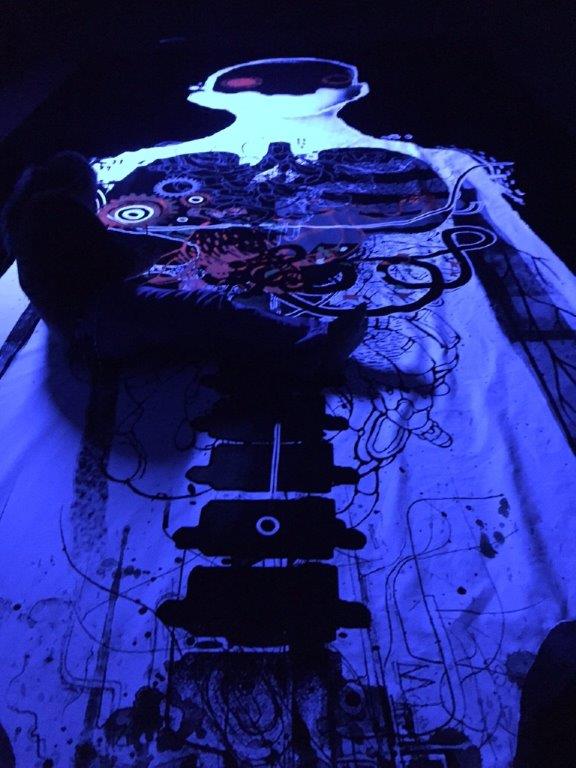 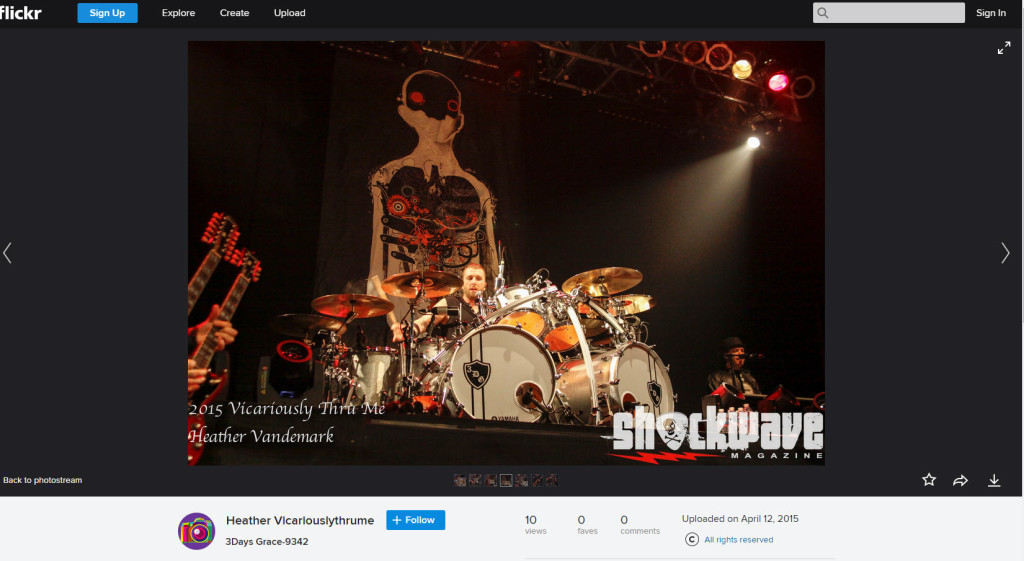 We were so excited to discover this photo on Flickr of the backdrop being used on tour – it looks great!

When to Print and When to Paint?

I am often asked about custom backdrops for theatres and concerts.  Especially from those who are at the very onset of the design process.  Frequently the question will arise……. Should we print it or paint it?

I DON’T believe that there is a stock or kit answer to this rather complex question.  As there IS a time and a place for both methods.

Here are some tips and tricks to help you decide which way to go………. I have decided to cover all things from an artistic perspective – not from a cost perspective.  As you would imagine, it’s hard to put a ballpark cost to a hand painted piece.  So I am looking at this purely from the design side. 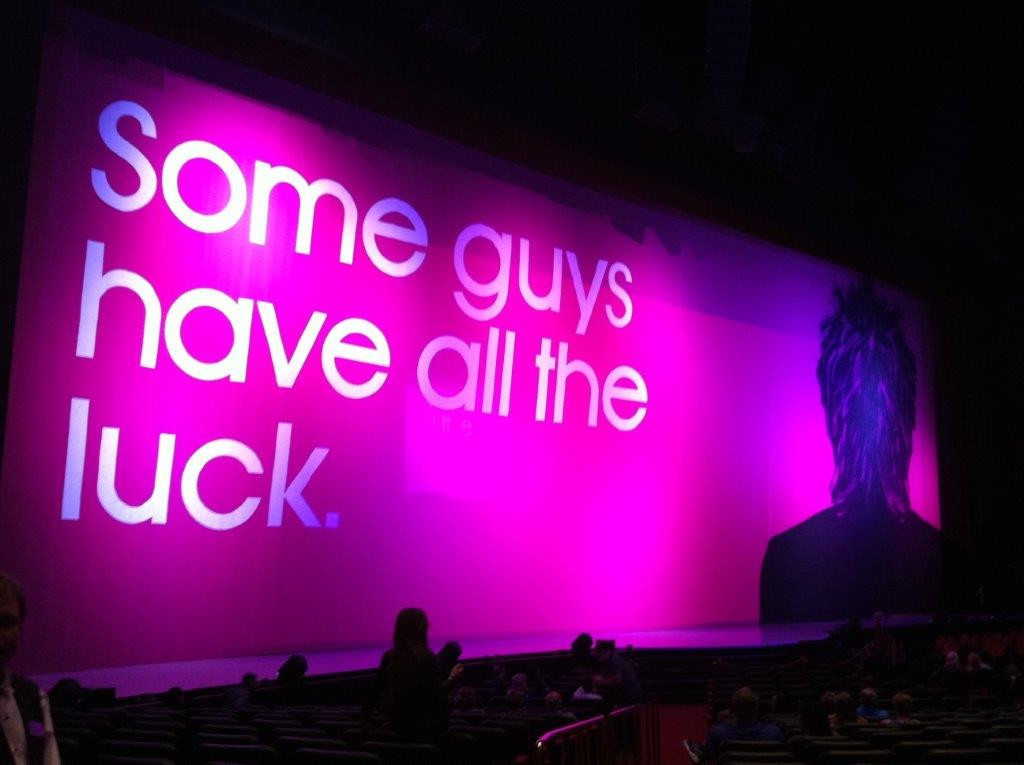 DID YOU KNOW……… you can create a COMBO MIXED MEDIA BACKDROP – with both printing AND painting?

When to make a mixed media backdrop:

Our latest press release is now online.  For blog readers, I am posting it here.

If you would like a printable version of this press release, or to read prior press releases, please visit our Press Room.

It has been a meteoric rise to the top for British singer and four Grammy winner, Sam Smith. The pop singer began his first arena headlining tour in North America in 2014. By year’s end, Smith found himself nominated for six coveted Grammy Awards, including Best New Artist, Record of the Year, Song of the Year and Best Pop Vocal Album. He ended up taking home all four of the mentioned Grammys.

So few would disagree that British singer and songwriter Sam Smith is the current number one tour this season. Los Angeles area stage drapery manufacturer, Sew What? Inc. is also happy to have a small part in it, having recently worked with Smith’s team on their stage drapery used already for his In the Lonely Hour North American tour.

In addition, Sew What? Inc. has something of a reputation as well. Megan Duckett, principal at Sew What? reported, “Sew What? was first contacted by Creative Director, Will Potts, as we have a good reputation in the industry and most designers are aware of who we are.”

The drapery manufacturer worked on a stage set that was an original design by Will Potts. “Sew What have serviced my design very well, and even performed a top quality and efficient service extending overseas for pre production which was in the UK. Shane has advised me with upmost care and I have to say that the results have been terrific. Thanks Sew What!”

Most would agree that it’s a dramatic show opener– employing a double drop Kabuki with a digitally printed scrim that is heavy on the WOW factor.  As the show opens, the two white digitally printed faces first stare at each other, before the sharkstooth scrim suddenly turns from opaque to transparent, revealing Smith behind it. A kabuki is next engineered to release the scrim using a rental solenoid system, like the ones Sew What?’s sister company, Rent What? Inc. provides. The crowd screams as the kabuki drops the scrim to the ground and the band and Smith begins. A final stage piece finishes the set, created using a classy upstage arched header with a white cyclorama behind. 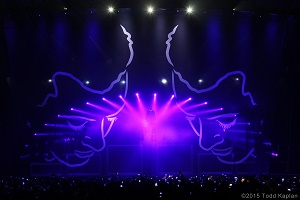 The seamless sharkstooth scrim is fashioned in a grand format, that’s 37 feet high and 63 feet wide. As most concert venues for the tour are in large arenas, everything was in large scale to accommodate the set’s massive size. Working on this type of scale is what Sew What? is known for, and does very well.

During his U.S. and Canadian tour, Smith performed in large concert venues across major cities such as Chicago, Boston, Nashville, Detroit, New York City and Los Angeles. Two concerts were held at The LA Forum in January in one leg of Smith’s North American Tour. The ‘Stay With Me’ star’s hectic pace will continue, as he will be hitting the road in March 2015, heading across the UK and Europe before returning again to the US.

Sew What? reports a busy manufacturing season as well. January saw them gearing up for production on a number of band draperies, as they look to the spring and summer concert tours, among a good deal of other projects.