This author has not yet filled in any details.
So far Shane has created 3 blog entries.

The Rise of the Christian Rock Band

Just recently, I worked on a project for the Christian Rock Band Skillet.  I really enjoyed the project, and it got me thinking about the fact that, over the last few years, here at Sew What? we have been approached by more and more Christian Rock Bands interested in custom stage curtains, digitally printed band backdrops, and other soft goods for their tours.

When I first joined Sew What? back in 2005, we primarily worked with “mainstream” rock, pop and country music artists.  Of course, we still do, but in recent years, we have also provided custom soft goods to the tours of numerous major Christian Rock and Pop recording artists.  In looking through the list of Best Christian Rock Bands from the website “The Top Tens,” I recognized over a dozen that we have worked with.

Top of the list is Skillet.  Just a couple of weeks ago, we made a series of digitally printed backdrops for the band’s current tour.  Included in the series were 2 center panels at 10′ h x 10′ w and 4 side panels at 10′ h x 5′ w, all printed on Heavy Knit and topically treated for flame retardancy.  With artwork that is a variation of the cover art on their current album, Rise, the backdrops really turned out beautiful.  Want to see the finished backdrops?  The band’s U.S. tour just started and runs through the end of September.

Here are a few more Christian bands / artists from the list that I recognized:

And that is just a few (I recognized many more).  When I think about it, though, it’s not really surprising that we are working on the tours of more faith-based artists than in the past.  In doing a little Internet surfing, I discovered that Christian Rock Music has become more and more popular over the years, not just with religious fans, but with mainstream fans as well.  Even the New York Times wrote an article on Skillet recently and, guess what?  Skillet sold more than 1 million albums last year, at the top with mainstream artists The Black Keys.

With this rising popularity, the tours of Christian artists are becoming more and more sophisticated, in regards to stage design, staging, lighting, special effects, and, yes, drapery and soft goods.  It is great for us here at Sew What? to have the opportunity to work with terrific artists, whether they perform so-called “mainstream” music or “faith-based” music.  We are proud to support artists and help them achieve their vision.

As Creative Director and Senior Sales for Sew What? Inc., I work with clients on a number of projects featuring custom stage curtains, digital backdrops and other soft goods. My role is focused on the front end – consulting with the client to understand the client’s vision of the set design, translating that vision into a recommendation of how Sew What? can help achieve that vision (perhaps recommending a specific fabric or style of custom drape), following through with our manufacturing department as the drapes are being made, and much more. However, while I may see the finished product in our facility just prior to shipment, it is rare that I see the drapery on the back end – in use by the customer.

That is why I love it when I find a picture on Flickr or a video on YouTube of our custom made stage drapery or backdrops featured in a concert or performance. Even better is when a client emails me a photo – that tells me that the client is pleased with the products we provided, and gives me the opportunity to “see them in action.”

Recently I was emailed by Vido Rhodes from Lone Star Ballet, an organization that I have been pleased to assist for several years now. Vido sent me a couple of photos of sheer drapery that we manufactured for them over the last year or so, on stage during Lone Star Ballet performances.

These 30’ h x 9’ 9” w drapes were sewn flat (unpleated), with grommets and ties on both the top and the bottom. This offers flexibility in hanging and draping. The client can increase or decrease the fullness of the drapes as desired, simply by varying the way the drapes are tied onto the supporting structure. The closer together, the greater the fullness; farther apart and the fullness decreases. The grommets and ties on the bottom edge also allow the client to use the drapes in multiple ways – either hanging from the top in a traditional drape configuration, or creating swags by hanging from both the top and bottom. 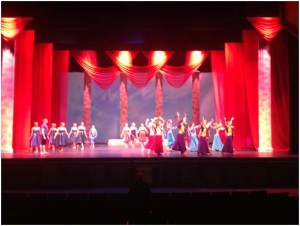 I love the way that Vido and his colleagues have designed the stage for these performances, and I’m so proud that our drapery played such a key role in achieving their vision.

As a Sew What Sales rep, recently I was contacted by the production team for music star Solange (sister of Beyonce). It was late on a Wednesday, and the production team was in a panic as they needed specialty soft goods to be delivered to New York City by the upcoming Monday, when Solange would be making an appearance on Live with Jimmy Fallon.

Originally the client asked us to digitally print artwork representing a variety of African prints and then sew the digitally printed pieces into stage skirts and backdrops. Unfortunately, the time crunch was too great for the production team – trying to create new artwork files (based on several image concepts) and get artist approval of the images in 24 hours just wasn’t possible.

So on to Plan B. On that Thursday, a production team representative made a quick run out to Downtown LA to select fabric in a variety of multi-colored cotton African-style prints. The fabric was then taken directly to a flameproofing company for rush treatment. We got the fabric from the flameproofers late Friday afternoon, our dedicated sewing staff came in on Saturday morning to manufacture the stage skirts and backdrops, and we handed the pieces off to our client by 1:00 pm Saturday to make a flight out to New York. The pieces made it to New York City in time for the show on Monday and looked great.

Sew What?, Inc. often handles last minute rushes for artist tours and special appearances such as these, and we appreciate the confidence our clients have in our premium products and service.

We aren’t always able to accommodate extreme rush projects such as this, but we always give it our best shot. I’m glad that we were able to come through for this project.