It seems like only yesterday that I published the very first post on our company’s brand new blog, but amazingly enough, it was ten years ago, on March 24, 2009. In the beginning, I was not only the blog administrator, but also the primary author of posts, with Megan contributing as well. I was learning as I went along, so the early posts were mainly text with the occasional photo.

Over the years, the voice of the blog has become more diverse, as a variety of staff members have contributed posts. Some have contributed just one or two posts, while others have became regular and frequent authors. Today, blog posts are primarily written by Marianne, Megan and me (though my focus these days is more on administering the blog rather than writing posts).

It is just so amazing and gratifying to see how this blog has evolved and improved over the years. Whow would have imagined when we launched this new unfamiliar format ten years ago that the blog would still be going strong in 2019! Thank you to all of our readers and contributors – here’s to another ten years!

It’s always very exciting to work with our super-artistic clients who are envisioning a stage or production design using our rental drapes and soft goods in unique and innovative ways. This helps them produce a completely one-of-a-kind, memorable look for their own special event that has never been seen before.

Recently we were thrilled to hear from the talented Nathan Braniff and his exceptional team of event production staff at Cory’s Audio Visual, a family-owned Oklahoma-based AV company that strives to give their clients an outstanding experience time and time again. We love working with these impressive folks because they are ready to “think outside the box” when it comes to stage designs, and they consistently fabricate dazzling stage designs using curtains of various different styles and sizes. For this project, they needed to build a stage for the Associated General Contractors of Oklahoma Executive Board Meeting that would be functional, but also had a little extra “panache.”

To help them achieve their design goals, we were delighted to provide them with a handful of our gorgeous 40’h Silver Satin Legs from our Silver Satin Rental Collection. They were able to swag these taller-than-average shirred drapes horizontally and then clamp them onto the truss bar directly—creating a truly distinctive background for the event’s special presenters and speakers. Adding some eye-catching and colorful theatrical lighting to these curtains, they were able to create a fresh, new motif for each individual portion of the meeting. Easy to hang, easy to ship, and utterly spectacular to light up, drapes from our luminous Silver Satin Collection are a surefire crowd-pleaser! Photographed beautifully by Jerry Hymer, you can see that, by simply changing the color of lighting being splashed onto these drapes, Nathan and his lighting designers were able to give this event’s staging an absolutely resplendent appearance.

Let our experienced sales reps help provide you with the drapery elements you need to build the remarkable event or production design that you are envisioning, too—contact one of them today!

We love it when our clients “think outside the box” when it comes to designing their custom stages and productions using beautiful and eclectic drapes from our diverse rental drapery collections. Nothing pleases us more than when a client happily shares a story or an image with us from their recent successful event, showcasing some of our lovely rental curtains as part of their intricate and unique stage designs. This past winter we were thrilled to work with Lighting and Scenic Designer “extraordinaire” Justin “Jiggy” Dunlap, who worked with the team at the always remarkable Oregon Symphony Orchestra on their unforgettable 20th Anniversary Gospel Christmas Concert. This special occasion was being held at the impressive Arlene Schnitzer Concert Hall (affectionately known to locals as “the Schnitz”) in beautiful downtown Portland, Oregon, and so Justin needed to create a magnificent design that would be memorable, festive, and adjustable enough to work within the many various sections of this wildly popular show. The venue’s larger-than-life stage demands nothing less than ultra-dramatic décor and lighting, so using some of our stunning rental drapes worked perfectly to do this.

Starting by building a proscenium frame downstage with Austrian Zip-Walls from our Silver Satin Collection, he gave the stage a striking elegance that put everyone in the holiday spirit from the get-go. Justin used our 30’h x 16’w Silver Satin Austrian Zip-Wall drapery to outline the proscenium, and then innovatively used some of our 12’h x 10’w Silver Textura Austrian Zip-Wall drapes as a fabulous “border” along the top of the proscenium, to help give it all a very clean, coordinated look. He then enhanced the look with an edgier, extraordinary design upstage by framing the orchestra with a 4’h x 50’w border and 28’h x 10’w legs in Metal Mesh, from our Industrial Textures Collection.  Embellishing the stage with holiday decorations and gorgeous theatrical lighting and gobos, Justin was able to deliver a thoroughly joyful vibe to the enthralled audience. This combination of unique rental drapes helped give their stage a completely one-of-a-kind, fresh look for various parts of the concert. These different—yet complimentary—styles of drapery are both easy to hang, light up spectacularly, and never disappoint! 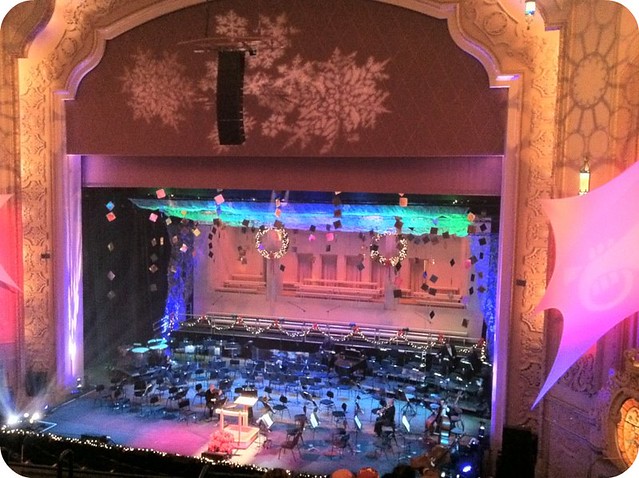 Rent What? was so excited to be a part of this outstanding production again this year, and we genuinely look forward to working with Justin again on his next breathtaking stage design. Don’t hesitate to reach out to one of our sales reps to see how we can help you create a fabulous look for your upcoming special events with dazzling curtains from our rental drapery collections, too.

(Check out the video to learn more about this exceptional orchestra and choir’s yearly gospel concert.)

Our clients contact us all the time looking for options and suggestions of some stunning theatrical curtain ideas for their upcoming special events, concert tours, trade shows, and stage productions. One of the most effective ways we’ve been able to assist them with gaining valuable inspiration for stage design ideas is suggesting that they take another look at our always-expanding Flickr Galleries. 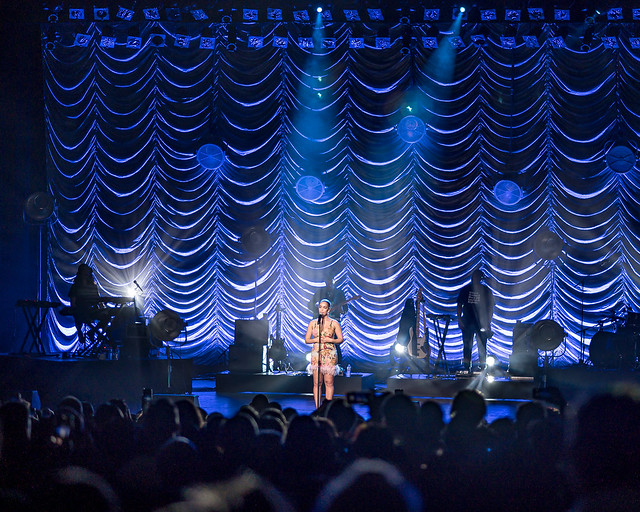 Showcasing all kinds of images—including custom-built grand stage drapes and digitally printed backdrops being used on international concert tours, to local awards banquets needing a little extra flair with a few of our beautiful rental curtains, to just about everything else in between—there’s a little something for every type of stage design you can think of.