The sewing staff at Sew What? Inc. are always super excited to have a Dan Hadley design pass through the sewing room.  Dan’s projects seem to bring out the best in our creative sewing skills, with textile minded challenges and fabric selections beyond the basic. It is always fun to watch the design come to life on the sewing table, and then see it in all it’s glory on stage once the tour starts. This design for the current Tenacious D tour was no exception!

This design focused on two elements, surface and shape.  Firstly – a fabric surface that would precisely mimic a projection screen, without the cost and maintenance of a vinyl projection screen product; and secondly, a precisely shaped projection proscenium to showcase carefully mapped out graphics. 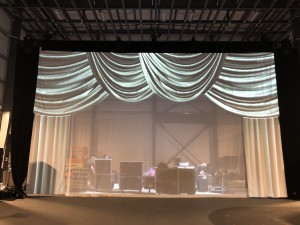 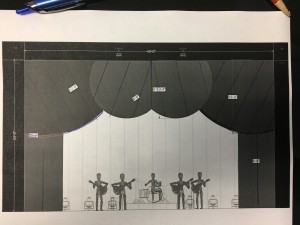 When it comes to taking projection surfaces on the road, many of our touring clients lean toward a substitute material. While a professional vinyl projection screen certainly offers a premium surface, there are many inherent difficulties in a touring “on the road” environment which include excessive weight, difficult to clean, problems unfurling and installing vinyl screens in cold weather and more.

There are several substitute textiles that we find popular, and after reviewing the options designer Dan Hadley selected our 120 “Brillante”. With a jet black backside and a brilliant bright white semi-matte surface to take front projection it was the perfect selection.

In order to keep all areas of the projection proscenium “seamless” the design was developed so that no individual surface area exceeded the 10 foot width of the cloth.  The shape was printed as a paper pattern, so that there would be absolutely no error made with the curves being precisely per the design. This is important so that the projection scene that had been pre-developed by the designer would sit perfectly on the cloth proscenium and not require to much graphic spill cleanup.

The legs were sewn as separate pieces to the proscenium header, making the set three pieces for an easy install. All the items fit easily in the bottom of a hamper and had durable touring finishes applied to them such as heavy-duty webbing and grommets at the top and reinforced pipe pockets at the bottoms of the legs. 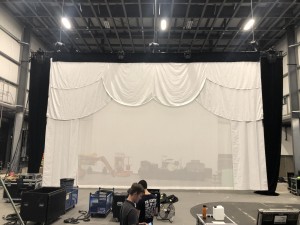 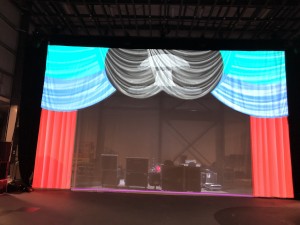 It is amazing all the different looks that were created using the projection proscenium strategy. It is as though you are transported to a multitude of different venues in the course of one show.  By projecting a variety of “drapery looks” the theme of the stage was instantly transformed. Themes were Gothic, Art Deco, Pop Art and more…… The custom proscenium most importantly provided a surface for colorful and bold artistic slides mesmerizing the audience with this unique use of projection in the foreground – rather than the more tradition use of images and projection “behind the artists”.

Check out these amazing images showing just a few of the projection scenes created for the show. 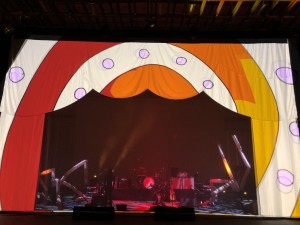 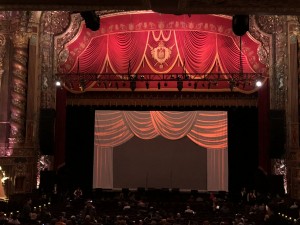 And for those Tenacious D die-hards – here is a fun video on You Tube that you might get a kick out of – you will see our projection proscenium at work!

Just like your audience, you want top performance. Sew What? understands and delivers. Our Stage Drapes and Theatrical Backdrops, Curtain Tracks and Theatrical Supplies exceed expectations and enhance your shows. For an experienced drapery manufacturer with work that ranges from digitally printed drapery for the hottest rock concerts, to the biggest theater performances, to just about any other kind of production under the sun, Sew What? is the answer. For inquiries call 310 639-6000.