We truly enjoy hearing back from our incredibly artistic clients after the event is over, hearing about how successful their production turned out! We also love getting to share in the success and fun that they had at their spirited holiday parties, concerts, and all kinds of other special events while using our beautiful rental curtains from our Specialty Drapery Collections. Recently we heard back from Tanner Laughlin Productions, who dazzled the town with their annual Christmas concert in Paris, Illinois, called “Tanner Laughlin’s Home for the Holidays Christmas Concert.” Led by the imaginative event producer Tanner Laughlin, they put on this joy-filled holiday performance to help raise funds for the very important Tanner Laughlin Performing Arts Fund Scholarship Program, as well as for the vital Paris Community Theater Programs. 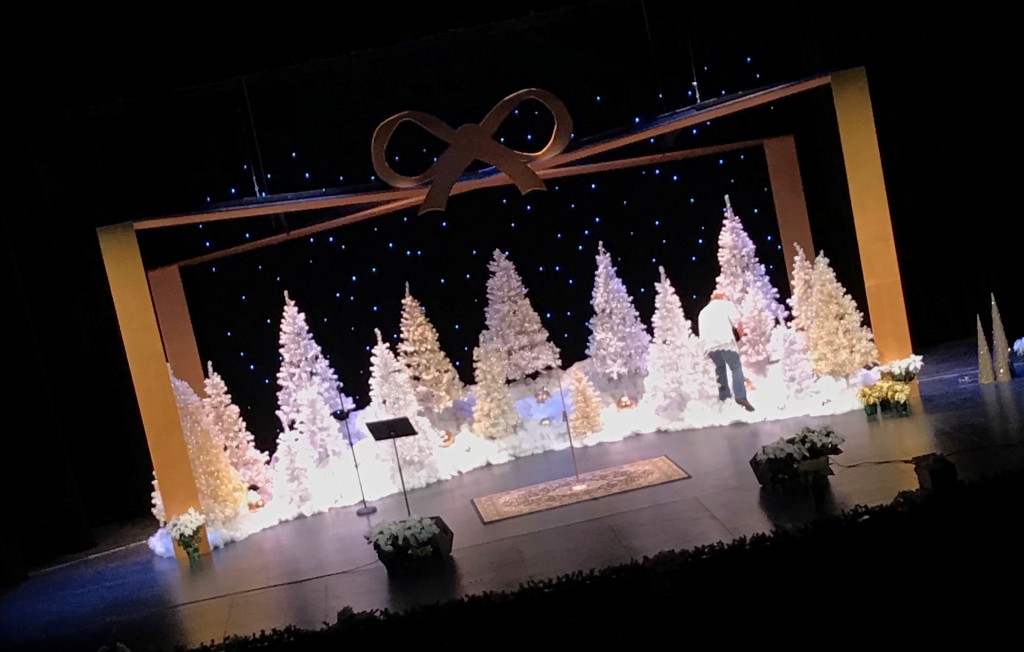 They wanted to create a gorgeous “Starry Night Sky” on their beautiful holiday-themed stage, and we knew that one of our Classic Stardrop LED Drapes would be outstanding for this iconic holiday look. The twinkly, sparkly LED lights are affixed on a bed of velvety black encore velour, giving this drape the perfect cool, crisp starry sky feel for their Christmas stage. With an accompanying DMX cable and on-drape independent controller, these stunning drapes can be operated both on stage or at your light board– making them a staging and lighting designer’s dream come true. These theatrical drapes are especially versatile because you can rotate them to so that either side can be the height or width. And available in both 30’ x 7’ and 30’ x 15’ sizes, we are sure to find a drape that will fit your design’s dimensions impeccably, too. 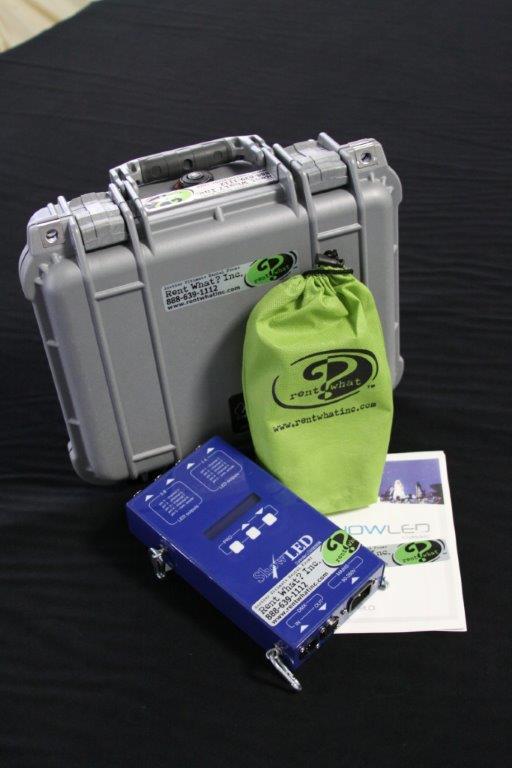 We were so pleased to be a part of this remarkable annual event, and the audience was also absolutely blown away with how spectacular everything looked! Let our team of representatives help you get the most perfect stage drapes for your upcoming special events.

Did you know………. Some fun facts from our Sew What? / Rent What? company archives

WORLD RECORD! The largest and heaviest single drape that we have ever made was for the Guiness Book Of World Records? Event producer, Steve Solomon of Upstage Right selected Sew What? Inc. to create the giant terrycloth towel for the record-breaking event. Measuring in at an incredible 131 feet by 78 feet, the towel displayed giant graphics for sponsor Nabisco Toasted Chips. With over 1,200 yards of fabric and 7,300 feet of thread, the towel literally covered the sands on Hermosa’s beach from strand to ocean. At a whopping 1500 lbs, the drape was moved with industrial forklifts to get it out of the sewing room, into the truck, and then onto the sand!  Want to read the press release? Check it out here: http://www.prweb.com/releases/2006/07/prweb410911.htm 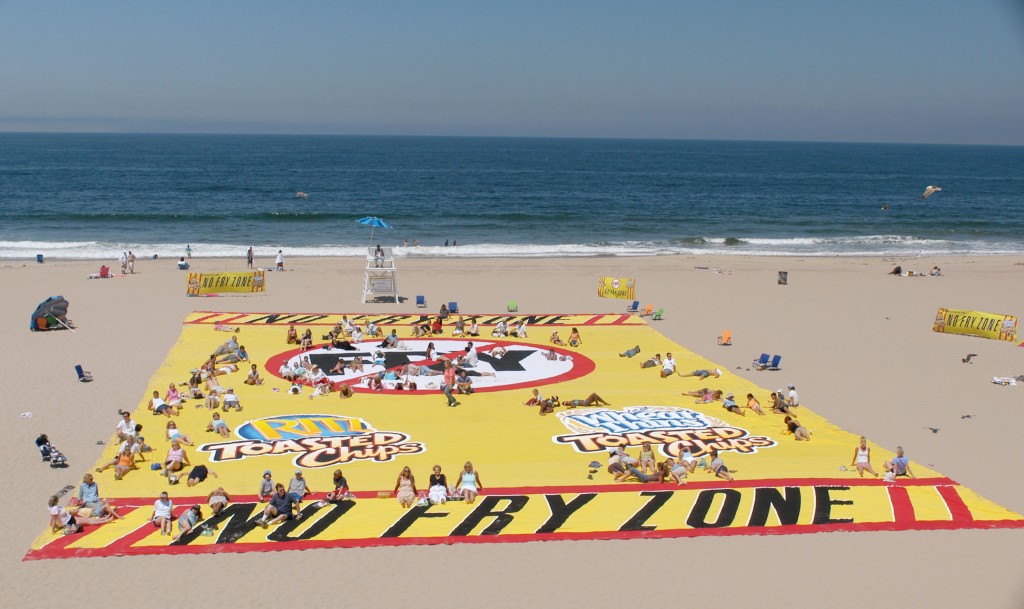 FINAL TOUR! We produced the softgoods for Motley Crue’s FINAL TOUR ever?! That’s right – these rock heavyweights retired in 2015 – and we were so pleased to be a part of it.  With pentangle appliqued sharkstooth scrims and printed drapery elements, we bid farewell to the legendary band with some of our most unique custom mixed media backdrops yet. Read all about it: https://sewwhatinc.com/company/press-room/stage-drapery-manufacturer-sew-what-inc-bids-farewell-to-motley-crue-on-its-final-tour/

ON TELEVISION! Did you know we were featured on CNN’s “Passion to Portfolio” series?  A recent video piece titled “The Woman Behind Rock Bands’ Backdrops” on the CNN Passion to Portfolio segment, focused on Megan Duckett – founder of Sew What? Inc. a theatrical draping company outside of Los Angeles, California. Sew What? provides concert backdrops worldwide for A-List musicians like KISS, John Legend, Rod Stewart and Madonna. Read the full press release: https://sewwhatinc.com/company/press-room/sew-what-inc-s-president-megan-duckett-appears-on-cnns-passion-to-portfolio-business-series/

SUPPORTING UNSIGNED MUSICIANS! At Sew What? Inc., we love the idea of “giving back” by supporting the arts and recognizing notable musicians in our videos, as well as putting something out there that shows off our products. Since 2012 we have exclusively featured unsigned artists, both local and nationwide, in our videos.  Rich Cole, James Lugo, It’s OK! The band, Thomas Underhill and more.  It is a pleasure to put back into the musical community! Want to know more about it? Read the full press release. 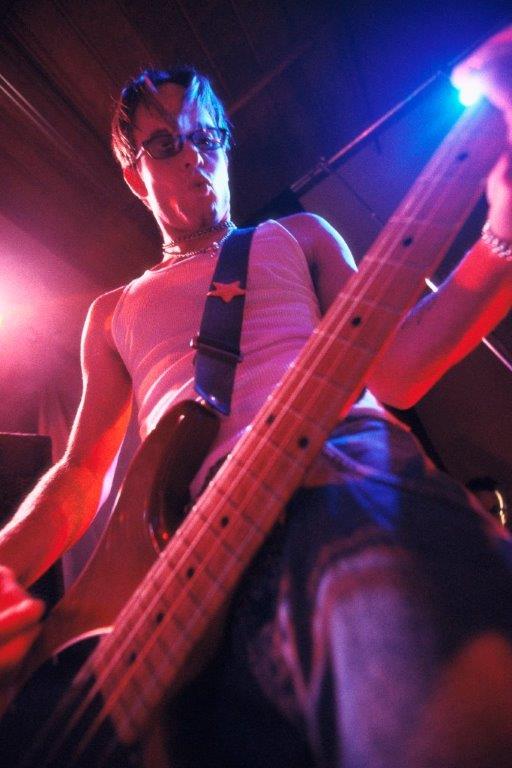 About Sew What? Inc.  Sew What? Inc., located in Rancho Dominguez, California, is a well-known stage and theatrical drapery manufacturer known for its dramatic theatrical drapes and fabrics used in major rock concerts, top fashion shows and other artistic staged venues. Their drapes have dressed the stages of Madonna, Kings Of Leon and the Killers to name a few. The company has received numerous awards for innovation, including the Dell/NFIB Small Business Excellence Award, and was featured on the 1000th cover of Rolling Stone. For information, contact Sew What? Inc. at (310) 639-6000, or email inquiries@sewwhatinc.com.

About Rent What? Inc. Rent What? Inc. is committed to providing an ultimate experience in drapery rental products and customer service. The firm, located in Rancho Dominguez, CA, has set the stage for artists including Green Day, Miley Cyrus and Michael Jackson. In addition to its large inventory of Inherently Flame Retardant stage drapes, traveler tracks and portable dressing rooms, the company is widely regarded for its basic pricing schedules, innovative damage waiver policy and fast and friendly service. For information, contact Rent What? Inc. at (310) 639-6000 or visit sewwhatinc.com/rent-what-inc/.

This past December, we were so pleased to get to work with Marta Hamilton and the artistic team at En Pointe Ballet Academy in Noblesville, Indiana. Founded by Robert Moore and Pollyana Ribeiro, the school’s inspiring philosophy is to “Focus on improving strength, flexibility, balance, and coordination all accomplished in a fun, nurturing, and energetic way.” To help showcase all of the hard work their students had been putting into their dance classes, they produced a special holiday dance performance that ended up needing some beautiful rental stage draperies. However, they also wanted these stage drapes to be versatile enough to work within the various themes of their production. Marta did an amazing job on the lighting for this show, working seamlessly with the stage designer Robert on his overall stage design vision.  Called “An En Pointe Christmas,” this eclectic program was presented at the local Noblesville High School Performing Arts Center, and consisted of two main dance sections. 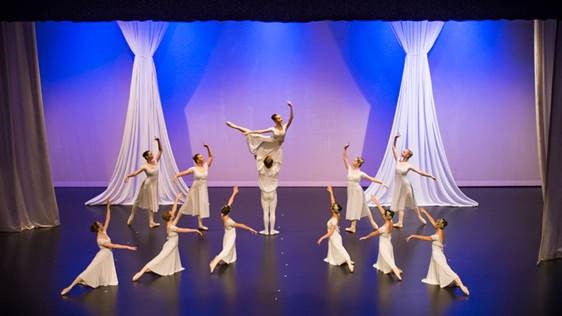 The first half of the production featured classical music and classical ballet which wanted a more “traditional” look to the stage design. They ended up choosing some of our elegant Ivory Satin Drapery Legs for the side panels, and some of our stylish White Supervel Drapery Legs for the back center showpiece, both from our Delightably White Drapery Collection. These theatrical stage curtains hang up easily, light up like a dream, and helped give the stage a clean and modern look for this important section of the performance. 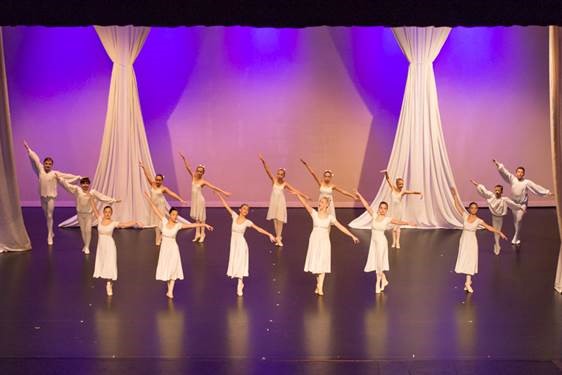 For the second half of this special event, they featured pop and jazz music with a mixture of ballet, hip-hop, and jazz dance. This part of the recital wanted its stage design to be a little more colorful and holiday-themed. So they decided to add some of our striking Red Supervel Drapery Legs and corresponding Red Super-Vel Borders, both from our Rockin’ Red Drapery Collection. 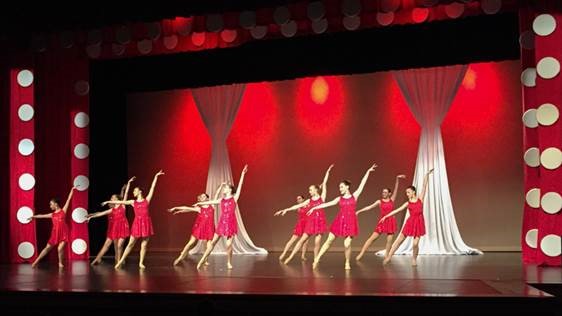 By embellishing the stage design with some of their own custom decorative pieces (they cut some foam circles and covered them with white fabric and affixed them to the side stage drapery legs), they were able to give it more of a “snowball/Christmas” feel. And also the large dots match their school’s own ‘dot’ branding too, which was a bonus! Photographed superbly by Bill Collinson, you can see what a fantastic job they did with this special performance’s unique and charming stage design. Let our team of drapery experts help you create a stunning, one-of-a-kind stage for your special productions, too! 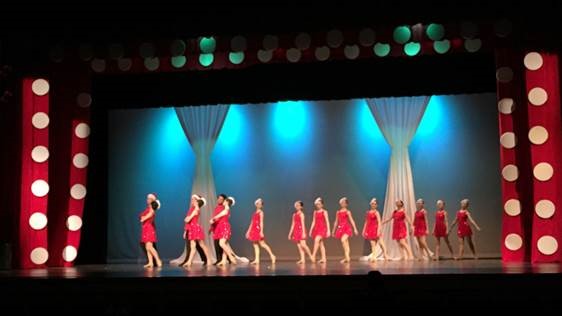 Truly Excite Your Audience With Our Exclusive Shadow-Box Kits!

Special Event and Party Planners— have you been looking for a new stage design that will help make your next big event captivating, exciting, and thoroughly entertaining? Try one of Rent What?’s exclusive Shadow Box kits to make your event the one everyone will be talking about the next day! 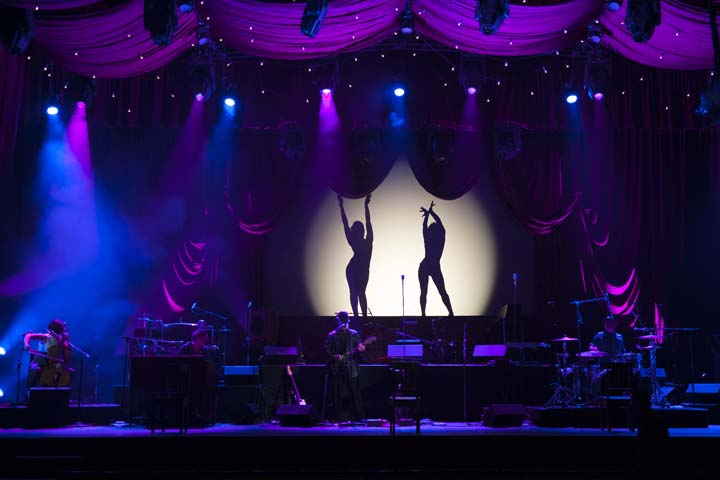 Clients of RW? Inc. have used these extremely popular rental Shadow Box kits at their parties and special events for years, and have knocked the socks off their crowd time and time again. These all-inclusive kits set up in a snap, are very affordable, and are easy and safe to transport via freight forwarder, Fed Ex, or even the back of your own truck. Consisting of the frame, walls, roof, mirror, special LED light/fixture, and carry box, our kits have everything you need to get your design juices flowing! 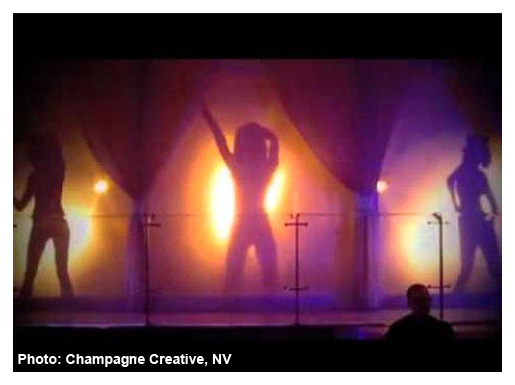 It’s easy to add some playful animation to any sort of party or event—and is great fun for people of all ages. The sky’s the limit with how you can utilize these kits to fit your party’s own special theme. Mix in with some gorgeous and dramatic rental curtains from our versatile Rental Drapery Collections to create a truly one-of-a-kind design. From naughty to nice, these rental Shadowbox Kits will give your audience something spectacular that they’ve never seen before, and yet will remember long after the event is over!

We love seeing our drapes being used at their special events, and nothing pleases us more than when we come across an article or imagery showcasing some of our rental or purchased soft goods online looking truly spectacular. Case in point—Recently we worked with Cate Carter and the creative team of production designers at Bryte Design in the UK, who were designing a stage for the band Elbow who were having a tour over here on the US mainland. They needed a backdrop for the band’s stage that would be versatile, easy to hang, light easily, travels well, and of course give a completely iconic appearance to the stage that would be memorable for the audience long after the last song was sung. 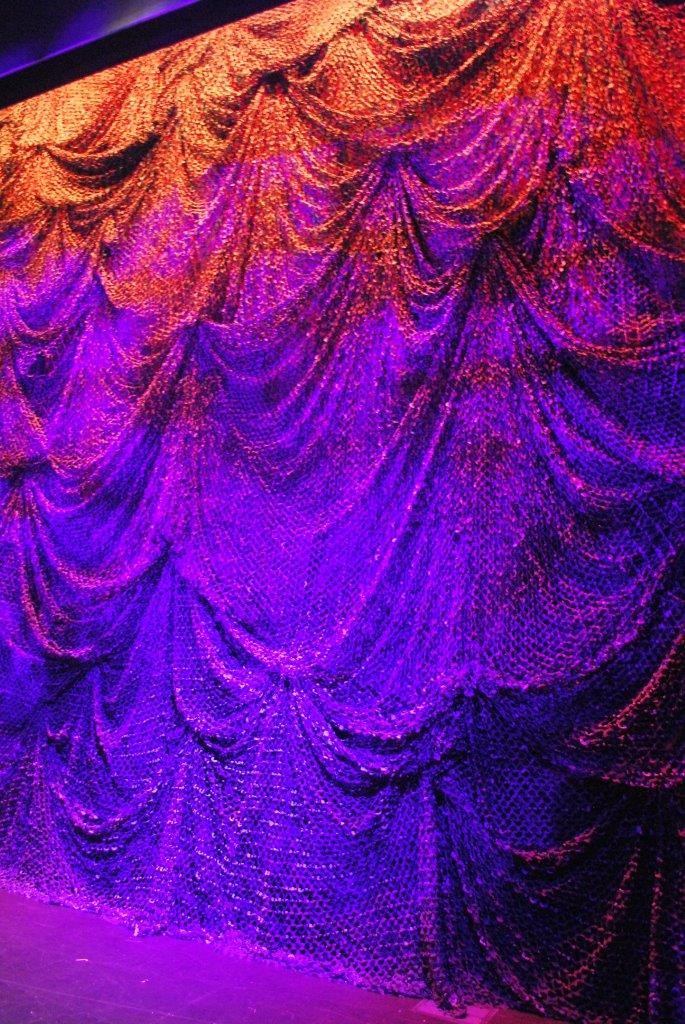 The textures of our Black Chaos Drape pop under colored lighting

They decided on using our 23’h x 40’w Black Camo Chaos drape from our Industrial Textures Collection, and it was absolutely perfect for this band’s ultra-cool vibe. This one-of-a-kind specialty drape consists of layers of swagged, rugged camo netting over IFR black poly muslin fabric. This combination gives the drape a very mystical, dramatic quality to it that can help set the stage for any special function you can imagine. Theatrical lighting and effects beautifully orchestrated by Franki McDade Lighting, the tour’s designers made a huge impact on the audiences with this incredibly unique backdrop time and time again for the tour. Check out some gorgeous photos by Michelle Shiers and a fantastic article about the band at one of their US shows (at the world-famous Wiltern right here in Los Angeles) here, displaying this alluring backdrop in all of its glory.