Home/Digital Printing, Products, Projects/A look behind the scenes at the creation of the MOVE Live Tour “steampunk themed kabuki drop”
Previous Next

We recently had the opportunity to work with Stage Designer Butch Allen and the MOVE Live choreography team – crafting three unique textile drapery looks for the 2017 MOVE Live Tour. This popular touring production is the brain-child of multi-talented artists Derek and Julianne Hough. Both known for their multiple successes on the hit ABC show ‘Dancing with the Stars,’ they bring an incredible dance and performance spectacular to the stage in this production. Working with Peter Morse, Lighting Designer; Butch Allen, Set Designer; and Director Tabitha D’umo, this was an exciting project for Sew What? Inc right from the get go.

One drapery backdrop piece we made for this project was completely unique in its design and construction, and unlike anything we had ever crafted before. Having taken lots of photos of the progress we will feature the STEAMPUNK themed kabuki drop in this blog entry.  It was fun to see the design develop from the various inspiration materials that were supplied.

Let’s start with the initial design package, which drew on a variety of color tones, textures, and steampunk themes.  As with all backdrops, it is more than just designing the drape – it has to work with the theme of the show, the wardrobe, the lighting design, and the overall tone of the production. Take a look here, and in particular note the items that were ultimately selected to draw from conceptually in the creation of the 30’h x 24’w finished kabuki backdrop piece.

Starting with a baseline – the drape itself needed to have a backing which would set the overall color palette for the drape. For this the Espresso Encore in 22oz (a nice solid opaque polyester velour) was selected for the trapezoid lining. This is a sturdy and durable cloth that reacts well when appliqued and is often used in mixed media backdrops.  The Espresso color offered just enough warm tone that we could bring in all manner of golds, taupe and burnt umber tones on top of it.

A wardrobe inspiration package was supplied that offered a glimpse of the different costumes that would be designed and crafted for the artists and dancers.  In reviewing the different wardrobe styles, one piece in particular jumped out as being “translatable” into a larger scale.  This image here shows a women’s leather woven bustier top.  In crafting this in a large scale, we would dress the face of the Espresso Encore with different ribbon width layers of various fabrics and textures per this inspiration image from wardrobe – all the cloth ribbons would be laid out on the bias and crafted with a woven effect. To mimic the movement of the wardrobe piece, the backdrop would also have knotted and braided ends to stream off the edges of the drape. 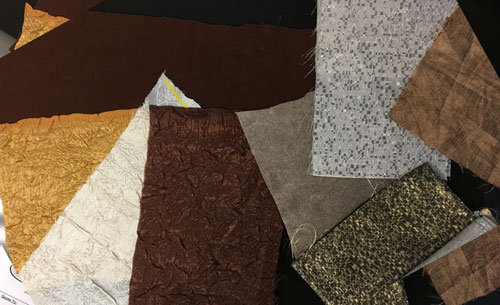 The color palette for the overall piece was very important.  Often, it’s not just what materials you choose – but rather the colors that you select when it comes to artistic pieces such as this.  This drape needed to stand alone and be gorgeous whether lit under stage lighting – or unlit under natural conditions. Here is a snap shot of the materials that were selected to create just the right antiqued / bronzed / steampunk tones.  We blended from gold thru cocoa brown, and made sure to have more than one texture and finish within the palette.  Materials selected included Textura, Supervel and Illusion.

The final touches for this piece would come from the applique of some custom “steampunk” themed printed elements.  The client supplied the graphics in a low resolution file, which graphic artist John Rios of John Rios Designs then re-drew to suit our applique project. This included “toning” the new print files so that the color palette worked perfectly with the fabrics that had been selected for the project.  A group of digitally printed steampunk “cog and wheel” elements were to be printed and then “cut out” for a decorative applique over the top of the weaving as a final dressing layer. 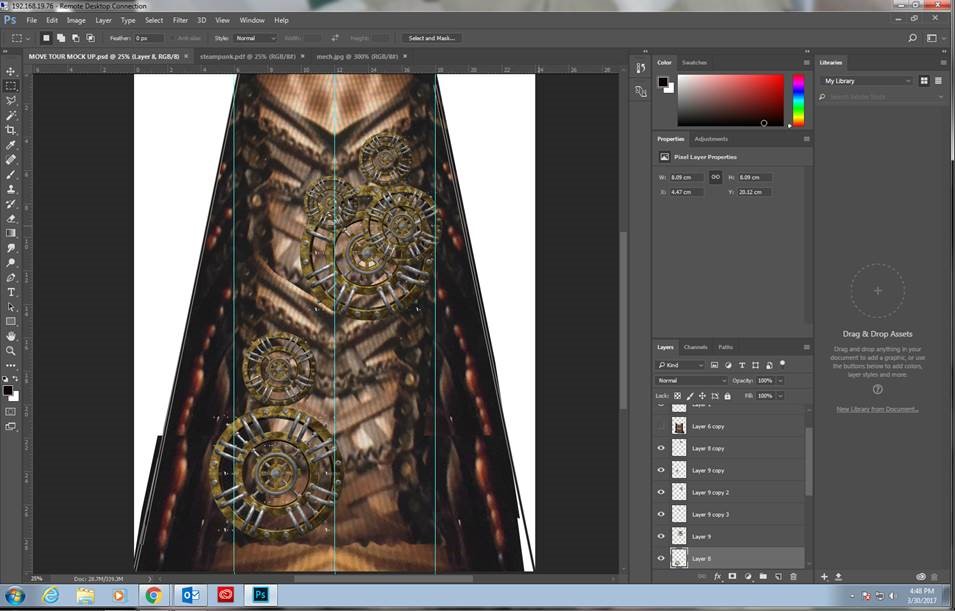 The early concept was some quick copy, past and stretch of the various inspiration images. Once the idea had been developed and approved then it was time to get to work!

Enjoy these images (in order) showing the construction progress as this masterpiece was crafted in hours by our wonderful and talented staff.  Even Crispin the office dog helped out with the project.  This massive undertaking required ALL hands on deck! 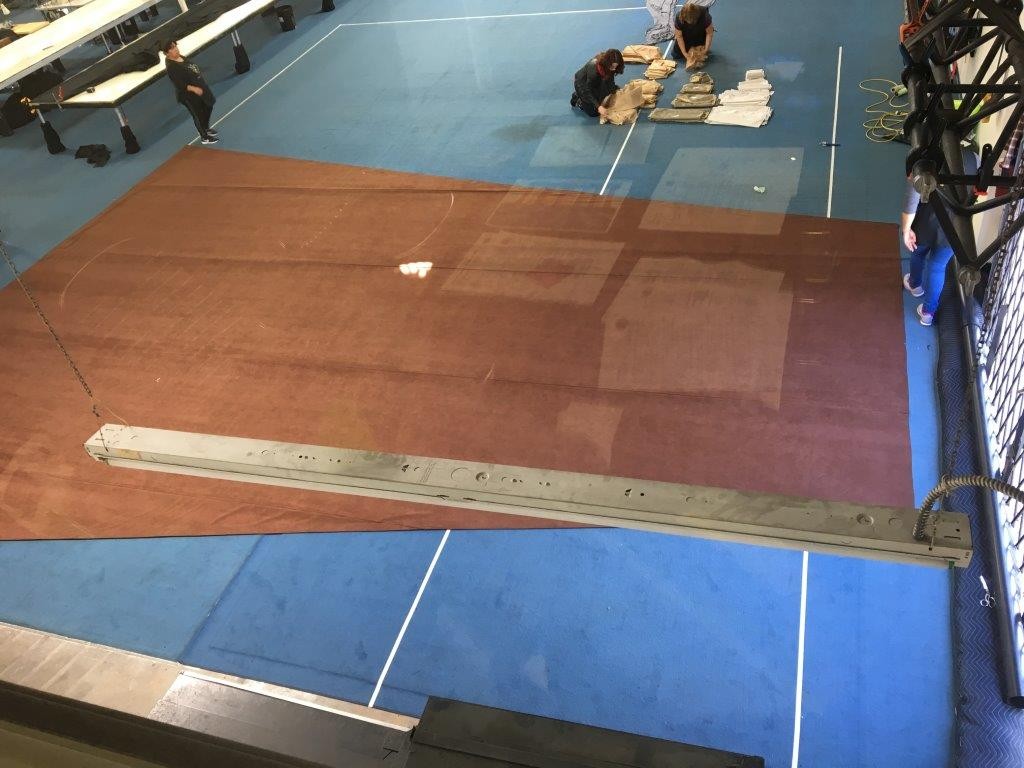 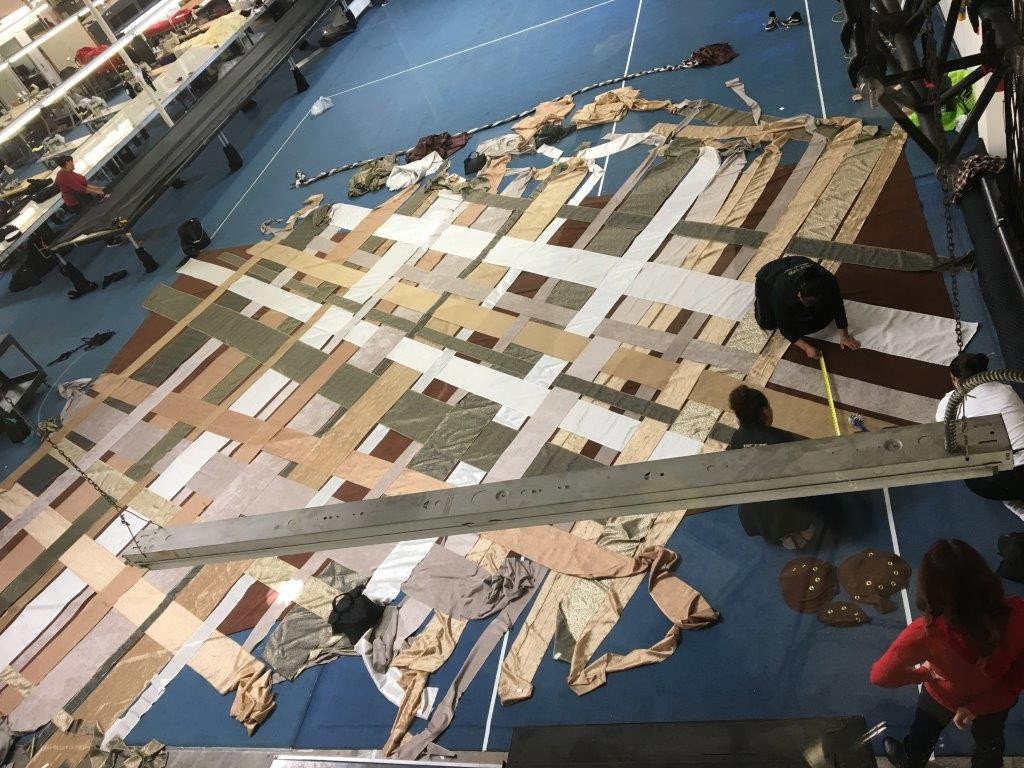 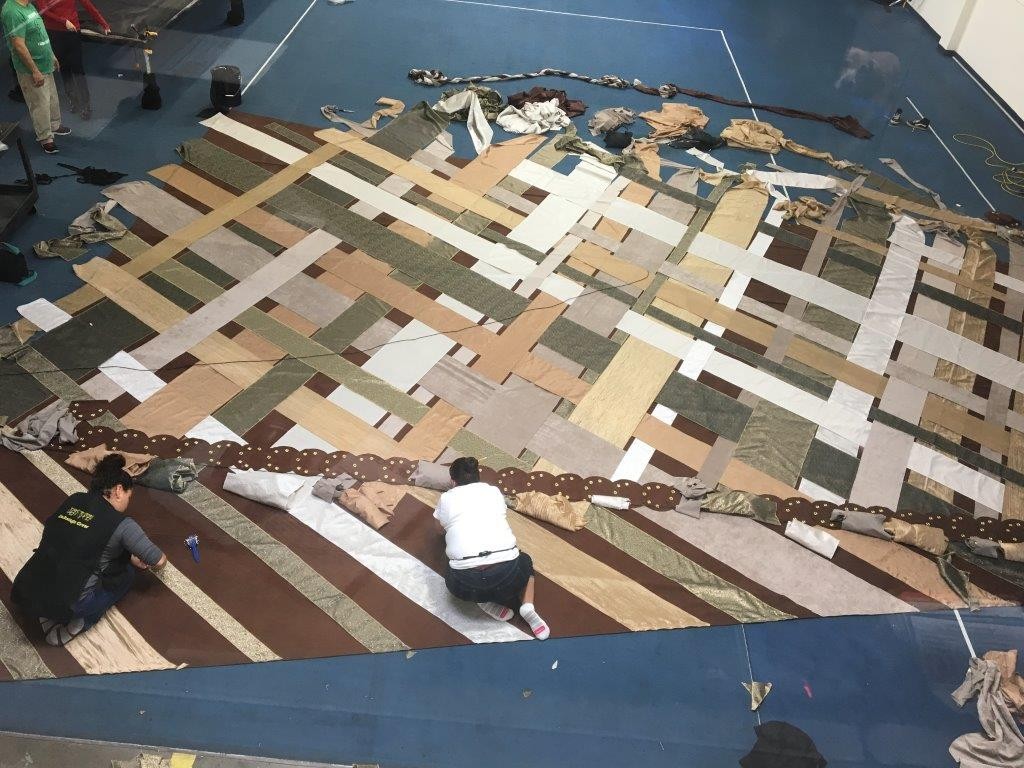 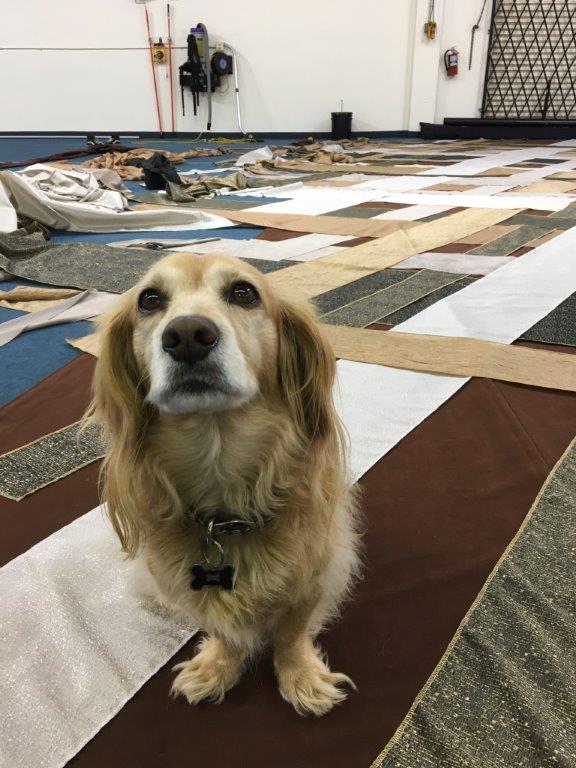 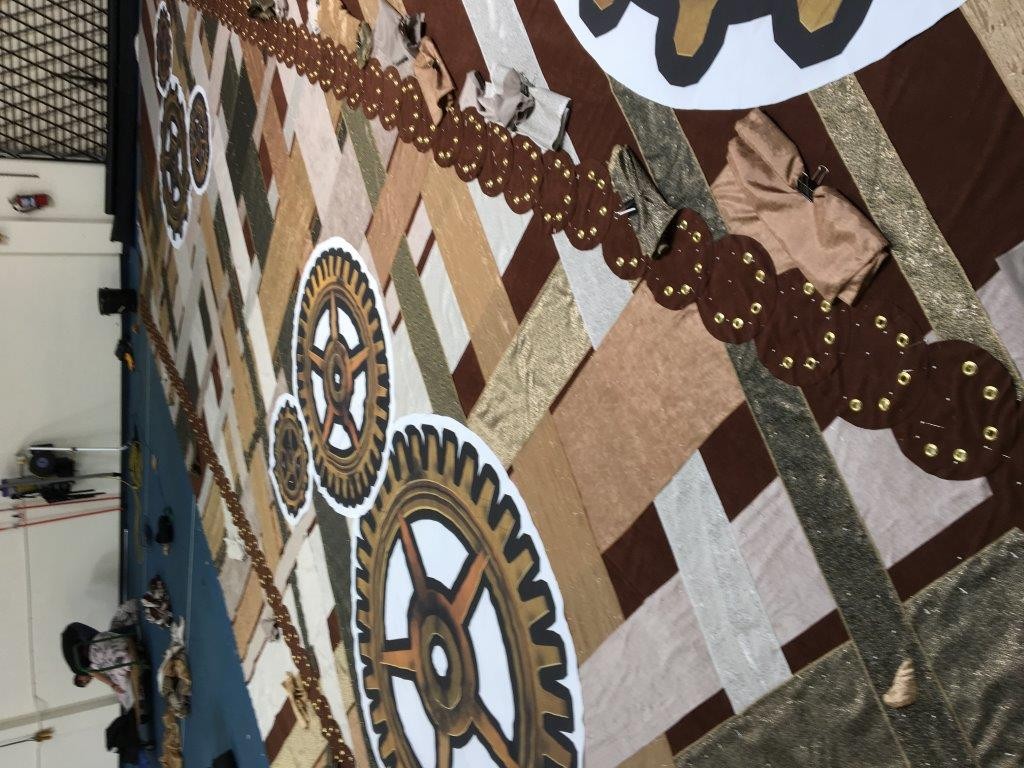 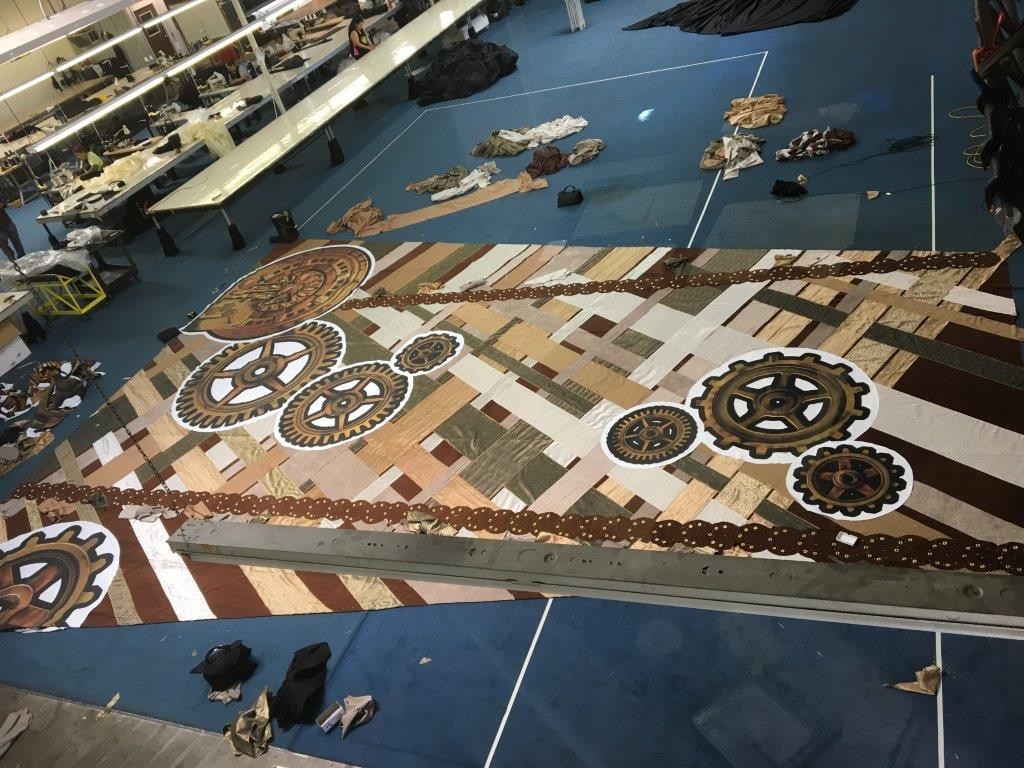 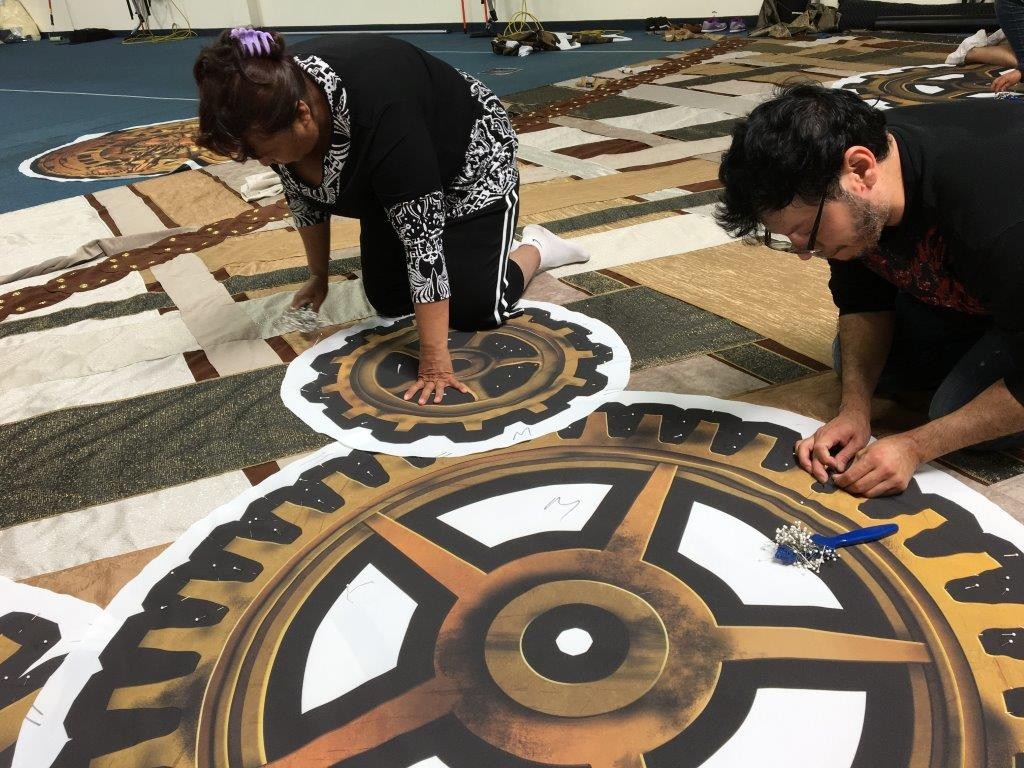 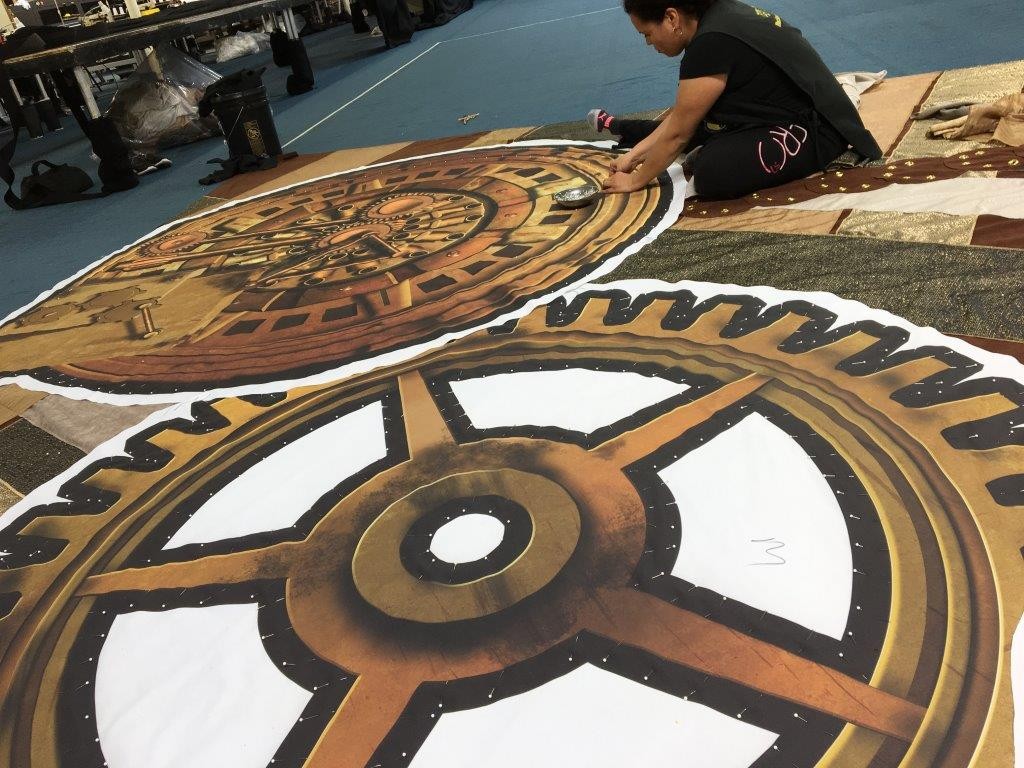 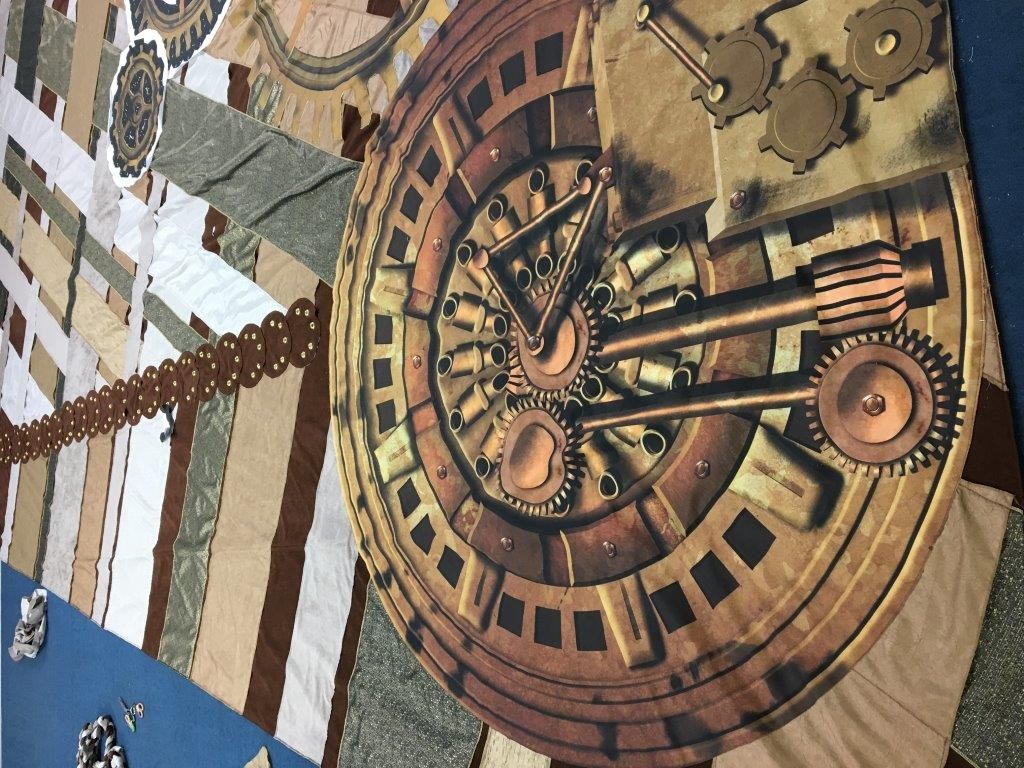 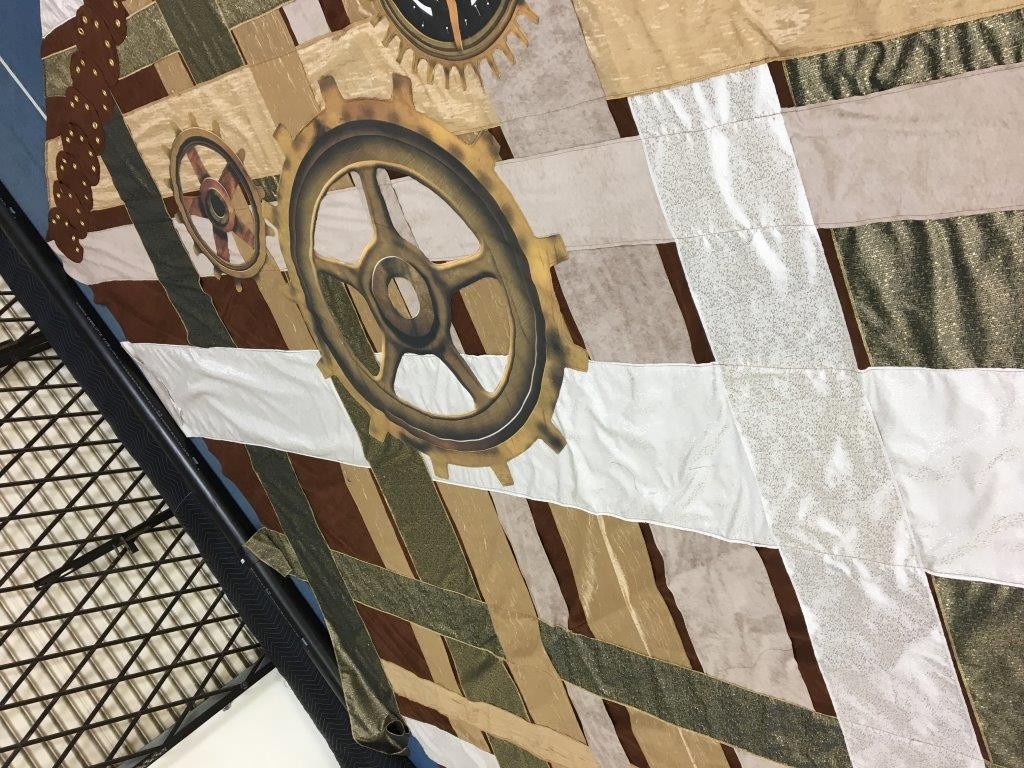 And so now you are probably ready to look at the finished piece live on stage!  Well, here it is in all its glory. We could not have been prouder of our work and the craftsmanship of the Sew What? sewing team was really put to the test on this piece.  We think that the team did an amazing job – don’t you?

About Sew What? Inc: Just like your audience, you want top performance. Sew What? understands and delivers. Our Stage Drapes and Theatrical Backdrops, Curtain Tracks and Theatrical Supplies exceed expectations and enhance your shows. For an experienced drapery manufacturer with work that ranges from digitally printed drapery for the hottest rock concerts, to the biggest theater performances, to just about any other kind of production under the sun, Sew What? is the answer.