The drama of the kabuki reveal is one of the most exciting bits of concert stage magic. By combining soft goods (a stage backdrop fitted with specific top finishes) with hardware (a solenoid system), you gain the ability to hide and then reveal your vision to the audience. 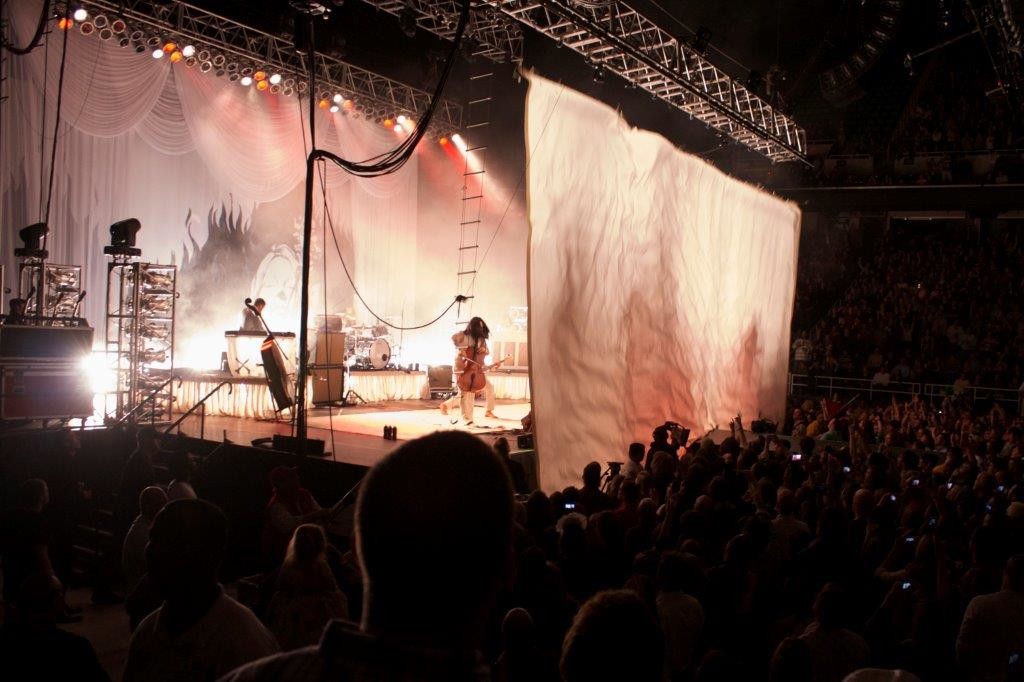 What it is: A Kabuki Backdrop can be just about any type of backdrop – plain or digitally printed, small or large.  The primary factor that distinguishes a Kabuki Backdrop from a regular backdrop is the presence of D-rings on the top edge (either sewn on or attached via Velcro).

How it works: The kabuki effect works on a simple principle – the use of electrically-powered magnetic systems called solenoids.  A solenoid resembles a small box with a pin sticking out.  A series of small solenoid boxes are attached in a daisy-chain row on a truss.  At one end, this chain of solenoids is plugged into electricity and attached to a controller switch.  The Kabuki Backdrop is hung on the solenoid pins via the D-rings. When the time comes, the crew pushes a switch.  The switch causes the pins to retract and, as a result, the pins release the D-rings.  The Kabuki Backdrop then falls.

For a single drop system, one set of solenoid heads is needed.  The number of heads required is based on the width of the kabuki drape to be hung as well as the specific solenoid system used, but typically 1 head is required for every 4′ to 5′ of drapery width.  So, in the diagram below, 10 heads are used for a 40′ wide drape.

The solenoid heads are attached together with a short XLR cable (in this case, a 5′ cable) between each head.  At one end, a long XLR cable (in this case, 100′) is attached to the solenoid head.  That long cable goes down to the stage floor to be connected to a power supply box, which is then connected via an Edison cable to a power outlet off-stage.

A manual remote box is also attached to the power supply.  On the remote is the “button” that, when pushed, retracts the pins on the solenoid heads.  When the button is pushed, the backdrop drops to the stage floor.

For a double drop system, two sets of solenoid heads (or twice the number as on a single drop) are needed.  In this case, for a 40′ wide Kabuki Drape, 2 sets of 10 heads each (20 heads in total) are used.

Generally, the two sets of solenoid heads are hung in separate rows on the same truss – one set on the front of the truss and the other set on the back of the truss.  On each set, the solenoid heads are daisy-chained together but are not connected to the other set.  This is because the two sets will be operated separately – one set for the first drop and one set for the second drop.

The front set of solenoids is fired first, dropping the bottom of the diaper and allowing the backdrop to unfurl and be revealed to the audience.  When the back set is fired, the backdrop drops to the stage floor.