Home/Company, links, News, Products, Projects/Stage Drapery Inspiration is Just a Click Away on our You Tube Channel
Previous Next

Watch Short, Captivating and ROCKING backdrop-inspired videos on our Sew What? / Rent What? You Tube Channel. 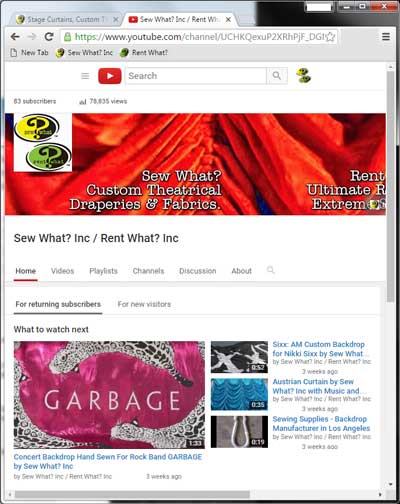 Sew What? is the ultimate entertainment and event industries resource for custom theatrical draperies and fabrics.

At Sew What? Inc, we produce everything for theaters and stages, from massive 3-D fabric sets for rock concerts to grand front curtains in world-class auditoriums. While our custom stage curtains and theatrical drapery manufacturing work is considerable, you’ll also find our drapes and soft goods supplies featured at trade show booths and special events nationwide. If you can dream it, we can sew it!

Here are a few fan video favorites from our YouTube Channel

All About Backdrops………. A Sew What? Inc Custom Mixed Media Backdrop Showcase

OUR VIDEO GURU and CREATOR is Mr. Tom Underhill @goodeyebadfinger

So next you are going to ask – where did all those killer soundtracks come from?  You see – we love to showcase local and emerging musicianship, too!! So here is some info about our featured musicians.  BIG THANKS to everyone below for their collaboration and continued support.

Brainspoon is a rock ‘n’ roll punk band based in Los Angeles, California. A staple of the Downtown Los Angeles rock scene, the band has earned a solid reputation with its blistering live show and catchy songs. Brainspoon’s music has been played on “Livation” on KXLU Los Angeles, KUKQ in Phoenix, and KKZZ in Ventura, as well as on Goldie’s Garage on Sirius/XM satellite radio. The band has been featured in Sparkplug Magazine, the Ventura County Star, and the VC Reporter. The band consist of Lead Vocals: Daphne Vandervalk, Guitar and Vocals: Michelle Balderrama, Bass: Tom Underhill, Drums: Chris Diez

It’s OK! was founded by Redd Kross guitar guru, Robert Hecker. He is abetted by his long-time musical cohort, vocalist Ellen Rooney, and the crushing rhythm section of bassist Dennis McGarry and drummer Joey Mancaruso. They base their operations in a secret lair somewhere in the South Bay Area of Los Angeles. Their third album, Cubed, was released in 2015. It’s OK can be reached at: http://www.itsoktheband.com

Rich Cole is a guitarist, songwriter, singer, arranger/music producer, widely recognized for his unique sound and vibe. His style ranges from acoustic rock with vocals to rock instrumental. Rich’s sound has evolved over the many years he has been playing and collaborating with other musicians. You can even hear a Spanish influence in some of his instrumental songs, which he picks up when playing with local bands in Puerto Rico while visiting his home there. His most current songs recorded have been rock instrumentals and include, Frustration, Scorp 11, Flesh Steel & Wood, and The 13th Hour. Rich Cole of RKCMUZIK can be reached at: www.rkzmuzik.com