Back in March, 2016 we were contacted by the lighting designer for alternative rock band Garbage.  They were ramping up for their 2016 tour and were looking to get a new custom backdrop made.  They had some artwork already designed and were looking for some ideas on how to translate their ideas and artwork into a unique fabric backdrop.

We arranged a conference call and discussed the idea of a Mixed Media Backdrop where the artwork (images of leopards and the band’s logo) would be digitally printed onto Heavy Knit in black and white, and then a fuchsia sequined fabric would be used to fill in the negative space around the artwork. To assist the client to visualize the end result, a small sample (see below) was made and sent to the client for approval. 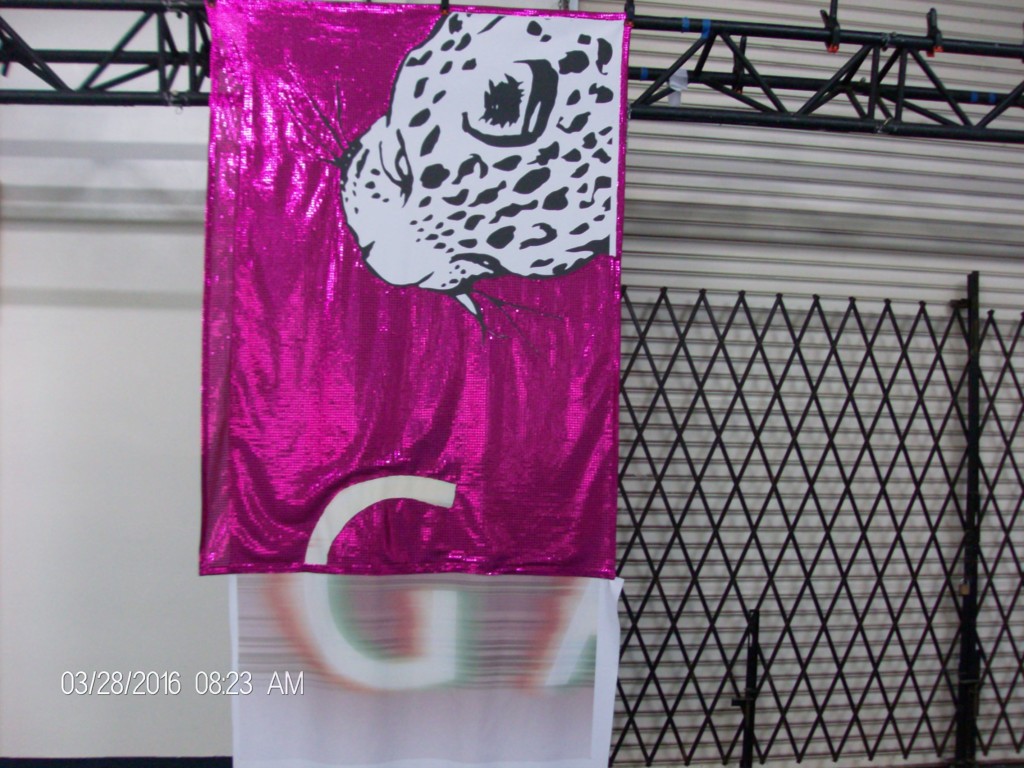 The client liked the sample but wanted to come to the shop to discuss some other options such as fabric color.  After seeing different fabric swatches, a decision was made to use the same fuchsia fabric shown on the sample.  The job went into production, the panthers were printed onto the Heavy Knit, and the fuchsia drape was made.

The next step was to lay the digital print onto the floor and lay the fuchsia drape on top of it, and a team of sewers pinned around the panthers and logo in preparation for sewing.  From there, the drape was moved to the sewing area, and the layers of fabric were sewn together where pinned.  The backdrop was then moved back to the floor, where the sewers then cut away the fuchsia fabric, revealing the printed leopards and band logo.  Finally, top, bottom and side finishes were added to complete the finished product.

The new backdrop made its debut on May 24th in Reims, France, as shown in the You Tube video below.  It’s always exciting to see the backdrops in action after all of the hard work that goes into them!