Grand Drapes: What are they? How are they made?

Home/Education, Products/Grand Drapes: What are they? How are they made?
Previous Next

Grand Drapes: What are they? How are they made?

The front curtain – known also as the grand drape, act curtain or house curtain – hangs just upstage of the proscenium arch and is used to close the acting area from the audience’s view when the acting area is not supposed to be seen. The Grand Drape is typically part of the formal opening of a stage production – the house lights dim, the audience settles and the grand drape is removed from the scene revealing the stage and its contents behind.

When planning your theatre drapery system, there are several types of front curtains to consider. The drape may part, rise, fold, drape or sink.

The traveler curtain or draw curtain, is composed of two sections of curtain suspended from a traveler track, allowing the curtain to part in the middle and pull offstage into the wings. This type of grand drape is used when there is insufficient fly space to permit lifting the curtain, or when there is some design or visual value to having the drape move horizontally rather than vertically.
Where the drapes meet in the center there must be an overlap of at least 12 inches to block any light leak. This curtain will always be sewn with fullness or pleating. There are many types of curtain tracks that can be used for this type of operation. Factors considered in the track selection will include weight of the drape, width of the drape and also whether it is curved or straight.

The “tab” or tableau curtain is made in two halves much like the standard traveller curtain. However, by means of lines and rings sewn diagonally to the drapes on the back side, each half of the drape can be raised diagonally creating a draped opening. The shape of the draping and the width to which it opens revealing the stage is determined largely by the position and angle of the lines and rings. Learn More.

The contour curtain is designed to be gathered vertically when raised by a counter weight system in order to expose, or close, the stage. This can create the effect of a fly curtain in a theatre where there is no fly space. Typically made of a light weight fabric with at least 200% fullness, each line of the contour curtain can be raised individually or simultaneously. When raised simultaneously the drape will lift and fall with the bottom edge parallel to the stage floor. When the lines are manipulated individually however arched openings of various shapes can be created.

Contour curtain, also known as a waterfall or venetian.

The Fly Curtain is used in large theatres where there is a fly system – a cavity above the stage with a mechanical system to raise and lower objects – and when the production design calls for a vertical reveal of the stage and its contents. Decorative fabrics are most often chosen and a lining fabric is usually sewn to the back to assist with the opacity of the drape.
Fly curtains are sewn as one complete drape that is larger than the width and the height of the proscenium opening. It should, if counterweighted, weigh slightly more than its counterweight permitting a quick close of the fly curtain at the end of a scene. The bottom edge of the fly drape will rest of the stage deck (surface) so as to assure no light leaks from underneath.

The brail and Austrian (aka puff curtain) are manufactured similarly to the contour but have only 25% – 50% fullness horizontally. While the brail has no vertical fullness the “puffs” or “smiles” of the Austrian curtain are created by adding 100% sewn in vertical fullness. These sewn scenarios require that the lines be raised simultaneously, and the drape will always lift and fall with the bottom edge parallel to the stage floor.

While there is no right and no wrong fabric for a Grand Drape, typical fabric choices include 21oz or heavier Cotton Velour or 22oz Encore Velour. Those looking to create a premium drapery product with both light and audio blocking capabilities will want to line their grand drapes. The lining will add volume, so make sure that you are factoring in stacking and storage space for your new grand drapes.

Track Recommendations for this type of application will vary depending on the style of drape chosen. Visit each drape style for track recommendations via the links above. 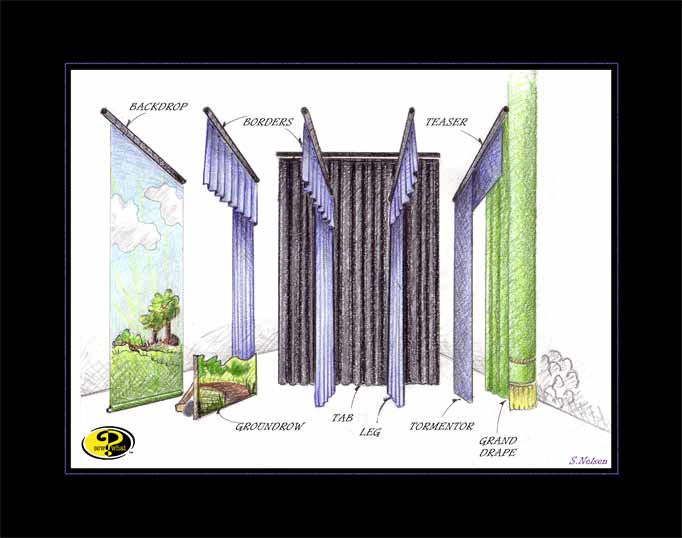