Home/Education, Products/Understanding the Differences Between Cycloramas, Scrims, and Backdrops
Previous Next

Because the terms “cyclorama,” “scrim,” and “backdrop” are often used interchangeably, it can get confusing to understand what each term really refers to.  To help clarify, I thought I’d give a quick rundown on the differences between these pieces. 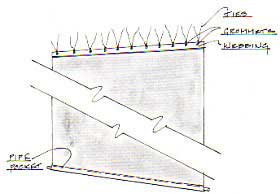 A Cyclorama (or “cyc”) refers to a white or natural seamless flat muslin panel.  It is always the piece that is hung furthest upstage (aka at the very back of the stage) and is usually used for sky effects (often through frontlit projection).

A Scrim is made from a very specific type of netting called Sharkstooth Scrim.  Depending on lighting techniques used, its appearance varies from opaque to translucent.  It is nearly always seamless and can be hung in various locations on stage.

A Painter’s Backdrop is a white or natural flat muslin panel (seamed or seamless) that is used in various locations onstage to help create the scene.  Often the scene is painted on (hence the name) – either by the stage crew or by a professional scenic painter.  Other times, the scene is projected onto the painter’s backdrop.  Alternatively, to create a similar effect, a digitally printed backdrop can be used rather than a painter’s backdrop.

And “backdrop”?  Well, it is just a generic term for something (usually a drape of some sort) that is behind something else – such as behind the orchestra at the Philharmonic or behind the President during a press conference.  It could be muslin, it could be velour, it could be another material.  It could be flat, it could be pleated, it could be a white or black or a solid color or painted or digitally printed.  Pretty much, the sky’s the limit.

Hope this helps.  And keep in mind, if you aren’t sure of what to call something – not to worry.  You can always call us and describe what you need – we can help you out.