Have you ever been in the audience of a stage play or concert, and somehow a scene slowly appeared on stage as if by magic?  If so, chances are this effect was created with a special fabric called Sharkstooth Scrim.

Sharkstooth Scrim is an open rectangular weave fabric (similar to net).  Its special weave allows for special effects to be created based on how it is lit.  When lit correctly from the front (and with a dark stage behind), the scrim will appear completely opaque, hiding any people or objects that are on the stage behind it. However, once the lights in front are turned off, and objects behind the scrim are lit, the scrim becomes transparent so that the objects come into view.  It really is an amazing effect – no matter how many times I see it happen, it still surprises me every time.

In addition to being used on its own as a backdrop material (creating what is referred to as a “Scrim“), Sharkstooth Scrim is also used in other ways.  It is often used as one of the components in a Mixed Media Backdrop, such as the one we made for Flogging Molly, in which the windows were cut out of a digitally printed backdrop, with Black Sharkstooth Scrim inserted behind the window cutouts. 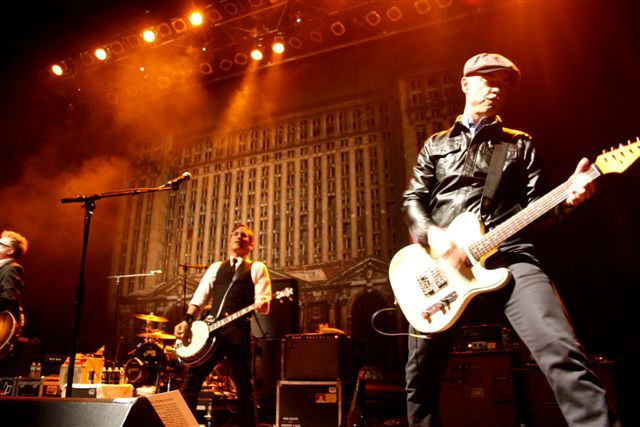 Available in several colors and a variety of widths, Sharkstooth Scrim is also used as a scenic substrate for digital printing and hand-painting.  By printing or painting images only on portions of the Sharkstooth Scrim, proper lighting techniques allow for the “plain” areas to disappear, making the scenic portions appear to float in mid-air.

In this video, our sewing shop works on a digitally printed scrim for award winning recording artist Sam Smith.  Stay tuned to the end of the video to see the finished scrim in concert, with the printed areas appearing to glow and float.

As you can see, Sharkstooth Scrim really is an amazingly versatile fabric!  Whether used on its own or with other materials, as a stand-alone fabric or a scenic substrate, the ways it can enhance a theatrical or musical design are countless.