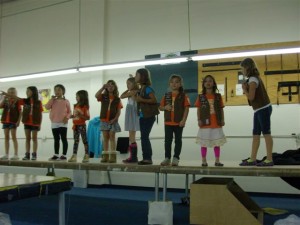 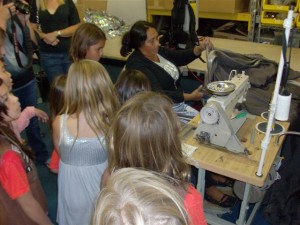 As summer tour season gears up and bands are loading up their big rigs, RVs, or a questionable 1982 Chevy conversion van the drummer inherited from his uncle Chester, one thing remains: the dire need for a killer backdrop during an epic outdoor summer festival run.

With rags packed onto the stage like sardines for the day’s entire lineup, it’s important to think about what you want your drape to do, what time of day you are playing, and how you want it to hold up in the various weather conditions as well as adhering to various stage and venue restrictions. 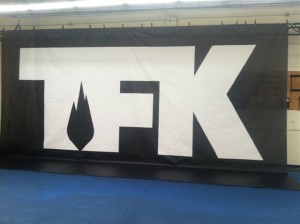 This was the case for the band Thousand Foot Krutch, whose summer tour kicked off recently in Oklahoma.

The phone rang on a Monday morning. Chad needed something in his hands by that Thursday AM so that he could take the backdrop on his flight to Rocklahoma. The band knew they were preparing to rock a larger crowd in a new demographic and saw an opportunity for branding to their audience. Chad needed something that was mesh to allow wind to pass through the drape, but was concerned about some of the vinyl mesh products he had seen in small banners for merch tables and promotional tents. The band also voiced concern about seam lines, the cheesy shiny finish many vinyl products are known for, portability, and the ability to manually kabuki the drape with ease for a quick set change.

Thankfully, Sew What? had the perfect substrate to not only meet their rush, but also addressed many of the band’s concerns about lighting, weather, road worthiness, and the ability to kabuki.

TFK ended up moving forward with a digitally printed backdrop using our new Pro Mesh substrate, with a female velcro top hem with matching male velcro header so they could manually kabuki the drop when they needed to clear their gear. Their logo was seamed flawlessly, the kabuki pull tabs and header did just what they needed, the matte finish of the vinyl mesh was perfect under production lighting, and the Oklahoma evening breeze slipped through the mesh to eliminate any fear that their drop would suddenly pirate the scene as a giant sail. 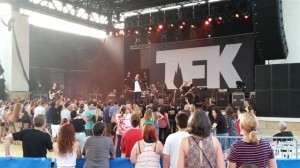 The best part of TFK’s experience: they LOVED their backdrop, but they loved even more that Sew What? was there in their time of need. As Chad put it in his text moments before TFK’s summer kickoff show, “The guys love it. I love it. Thank you for pulling through for us with a ridiculous turn around. I was doubting the entire time. But we received something BETTER than we ever expected. Thank you!”

In production, we all know that designs, funding, and decisions, all change at the turn of a dime. Sew What? takes pride in making what seems like the impossible, possible.

Need Inspiration? Check out the Rent What? Drapery Collections

Maybe you already have a design theme for your show or event, but you aren’t sure what types of drapery would work within that theme.  Or perhaps you are completely stuck and need something to kick-start your creative process.  Why not check out the Rent What? Drapery Collections?  With seven differ