Presenting a Unified Visual Experience to the Audience

Home/Clients, Products, Projects/Presenting a Unified Visual Experience to the Audience
Previous Next

Presenting a Unified Visual Experience to the Audience

During a concert tour, there are so many elements that, consciously or unconsciously, can inspire a reaction from the audience and either enhance or distract from their experience.  Of course, the concert set design is a big element – from hard elements (such as stages and risers and runaways) to projection components (such as projection screens and LED walls) to stage drapes (such as swags and legs and backdrops) – the set design furnishes the background and provides context to the audience’s experience.

But I believe that the most successful concert design is when all the elements – even including the costumes or clothing worn by the artist or band – all complement each other (and the music) to create a unified visual experience for the audience.  It occurred to me recently in looking through our Flickr portfolio that just such a unified experience was created at The Avett Brothers New Years Eve 2013 Concert. 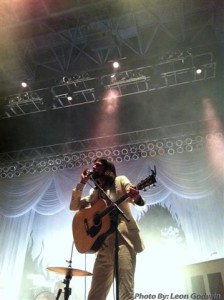 The primary focus of the set design initially appears to be the gorgeous White Voile Swags, part of Rent What?’s Delightably White Drapery Collection.  But look closer, and you’ll find that, though the gorgeous rental drapes definitely make the biggest impact, there are other subtle elements that complement the drapery and visually unify the entire visual effect onstage.

The drum and keyboard risers are also made of a white fabric, and the drum skin is white as well.  Even the projected visual is in black and white.  Even more interesting to me, though, is that the artists are all dressed in white.  But not in a “costumey” way – rather in a natural organic way, as if they just happened to choose to wear white (rather than deliberately trying to “match” the drapery).

In looking again at the photos, it also occurred to me that there is very little color on stage, other than that added by lighting – and somehow, that makes the entire set so much more impactful.  I love the way that so many elements – drapery and soft goods, clothing, and projection and lighting – all work together to evoke a cohesive mood, without feeling overdone.  It really was, all in all, a beautiful picture to present to the audience.