One of the best things about the Internet, social media, etc., is the opportunity to discover new people and artists.  Last year, in looking through Flickr in search of photos of our custom stage drapery and band backdrops on location, Megan came upon the photostream of Jana Zills that included some amazing photos that Jana took at last year’s Rascal Flatts concert, including several that featured the custom backdrop that Sew What? made for the tour.  Megan included the photos in our Rascal Flatts Flickr Gallery, and through comments back and forth about the photos, Megan and Jana got to know each. This year Jana was nice enough to let Megan know that she had taken photos of this year’s Rascal Flatts concert – again featuring a custom digitally printed backdrop by Sew What? Inc. 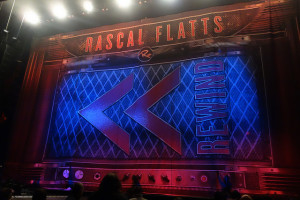 Jana has taken some amazing concert photos – it is hard to believe that she is not a professional photographer!  Megan reached out to Jana and asked if she would tell us more about herself so that we could feature her on our blog.  Here is Jana’s story:

I’ve been doing live music photography since 2002, when I was a teenager. It was something I picked up at a live music show my parents took me to. I had disposable cameras then. I have a natural talent for live music photography.  Since then I’ve been to over 250 live music shows, not missing a single photo opportunity. In 2013, I believe, is when things started to get more involved with my photography. I shot a Taylor Swift show from the second row in March of 2013 and in October I had an editor of a live music audio magazine highly interested in my photos. We agreed on a deal and he published 5 of my photos from that show. I don’t do this for fame, money or even to get published. I do it for the people who might’ve paid $30 for tickets, sitting in the nosebleeds, dying to be up close and personal with their favorite artists. I have many people on social media who follow what I do and are a great constant support for me and what I do. I’m blessed in my opportunities to get up close and personal with my favorite artists.

Check out Jana’s photostream for some wonderful concert photos!