Home/News, Products, Projects/Pewter Textura Drapes Set the Stage at the Rock and Roll Hall of Fame
Previous Next

We were honored to be selected for the second year in a row to provide rental drapery for the Rock and Roll Hall of Fame 2014 Induction Ceremony, held this year at Barclays Center in Brooklyn, New York. 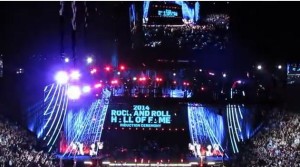 With a design utilizing previously purchased custom drapery in Pewter Textura, along with rental drapery in the same fabric from the Industrial Textures Drapery Collection, a series of swags and legs provide a beautiful backdrop to the honorees / performers, as shown in this video of inductees KISS at the ceremony:

The pewter (grey) color of the drapery is perfect for stage lighting – the drapery can appear to change color simply by utilizing different colored lights – and the slight “crushed” nature of the fabric provides texture and depth to the scene.

Kudos to our own Shane Nelsen, who traveled to New York to oversee the installation of the drapery – it looks great!

Want to see more?  The Rock and Roll Hall of Fame 2014 Inductee Ceremony will be broadcast on HBO at 9pm on May 31.