The Rise of the Christian Rock Band

Just recently, I worked on a project for the Christian Rock Band Skillet.  I really enjoyed the project, and it got me thinking about the fact that, over the last few years, here at Sew What? we have been approached by more and more Christian Rock Bands interested in custom stage curtains, digitally printed band backdrops, and other soft goods for their tours.

When I first joined Sew What? back in 2005, we primarily worked with “mainstream” rock, pop and country music artists.  Of course, we still do, but in recent years, we have also provided custom soft goods to the tours of numerous major Christian Rock and Pop recording artists.  In looking through the list of Best Christian Rock Bands from the website “The Top Tens,” I recognized over a dozen that we have worked with.

Top of the list is Skillet.  Just a couple of weeks ago, we made a series of digitally printed backdrops for the band’s current tour.  Included in the series were 2 center panels at 10′ h x 10′ w and 4 side panels at 10′ h x 5′ w, all printed on Heavy Knit and topically treated for flame retardancy.  With artwork that is a variation of the cover art on their current album, Rise, the backdrops really turned out beautiful.  Want to see the finished backdrops?  The band’s U.S. tour just started and runs through the end of September.

Here are a few more Christian bands / artists from the list that I recognized:

And that is just a few (I recognized many more).  When I think about it, though, it’s not really surprising that we are working on the tours of more faith-based artists than in the past.  In doing a little Internet surfing, I discovered that Christian Rock Music has become more and more popular over the years, not just with religious fans, but with mainstream fans as well.  Even the New York Times wrote an article on Skillet recently and, guess what?  Skillet sold more than 1 million albums last year, at the top with mainstream artists The Black Keys.

With this rising popularity, the tours of Christian artists are becoming more and more sophisticated, in regards to stage design, staging, lighting, special effects, and, yes, drapery and soft goods.  It is great for us here at Sew What? to have the opportunity to work with terrific artists, whether they perform so-called “mainstream” music or “faith-based” music.  We are proud to support artists and help them achieve their vision.

In surfing through Flickr a few days ago, I was reminded of a fun project we did recently.  We were approached by Brett Enzensperger, Production Manager for the Steve Miller Band.  Brett wanted our help to recreate the band’s icon “Joker” 1973 album cover.

The resulting artwork was then digitally printed onto poly knit through a dye sublimation process and then sewn together into the backdrop.  Here is a photo of the backdrop hung at our manufacturing facility during the quality control process: 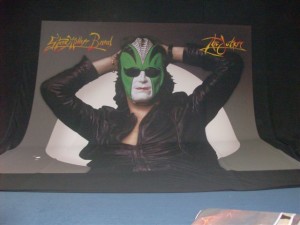 Want to see the finished backdrop on stage in all its glory?  There are still a few shows left on the 2013 tour schedule, but if you can’t make one of those shows, a photo will have to do.  Actually, it is a photo that inspired me to write this post.  I found a photo on Flicker of this very backdrop – it seems that the backdrop was hung onstage as the audience was entering the venue and then, when the show started, the backdrop dropped to the floor, kabuki-style, to reveal the band.

Question – Can I remember each and every year since we started this here thing?

Answer – Nope. I cannot even remember what I had for breakfast!

Here are the high points!

1996 – Quit my day job and plunge headfirst into business in Warehouse # 1.

Hire a marketing company ……….and expand

2005 – Take out a whopping commercial loan and buy / move into Warehouse # 3. Hire and expand – hire and expand

Sounds rather like a broken record, doesn’t it! Well, I do well recall several significant moments………………

Such as bumping into Craig Waldman in the hallway while working at Merv Griffin back in early 1996, when he said to me “You have a strange look like you are going to give notice or something”…. OH MY – and a mind reader too? Well, I had been meaning to tell them exactly that. Indeed – I had the look of one foot out the door, I suppose.

So from there the small hobby business that Adam and I had been grooming in the garage, of all places, was about to be birthed – into its own warehouse. All the bills, all the risks and none of the health insurance or 401k’s that we’d grown to love. Thankfully Adam had a stable position, so it was just my income we were putting on the line – but it was enough to motivate us to work day, and night – and day, and night…….. until …… well – feels like we still do.

That is a fact – that in small business every day in business is a gift – and every new client is an opportunity to share the word. When the words are good, then it is all fun and games – but that wasn’t always the case – and there were laughs and tears alike. Still are, come to think of it.

The first warehouse was in Torrance at the airport – managed by KAY properties – they took a gamble on us, and how sweet they were as landlords. So, in 800 sq ft of roller-doored garage space, we were “up n’ running”. Mini fridge, check. Coffee maker, check. Obligatory cheap Palm in mini-lobby, check. Hand me down computer from Isaac Waksul… you got it. Old kitchen table to sit at, and we were OPEN for business.

Small problem – no work. no carpet, no cutting table, one sewing machine and the phone not ringing yet. Let the adventure begin!

Getting the phone ringing proved to be less of a challenge, and heck, we were able to connect the phone to ring through to my “pager” so we were able to be found at any moment! Technology talking – lol – and that was hi-tech. I wore a corded headset plugged into the portable phone while I was at the machine sewing and would have to yell over the “brrrrrr, brrrrrr, grrrrr” of the machine every time I took a pass under the needle. “Huh? What?” the callers would ask….. Well at least they knew it was made by hand in America.

We got carpet thanks to Joe Gallagher’s dad – he was a carpet layer. We bought a cutting table from All Access, and slowly, one at a time, began to build clients and employees. Maria Martinez being our longest employee – indeed she was a first hire and we quite literally grew up together. We stitched our way through all sorts of celebrations and losses, there was thread and drapes for the good days and the bad.

So many memories – one  employee we hired who insisted on coming in each day wearing her Sunday best – jewels and heels and skirts and all. Another who took buses all the way from East Los Angeles every day, in and out of Torrance (no small feat I tell you), as they were so committed to the job. Recalling the time we were broken into, and discovered that the insurance we had bought had an “alarm clause,” and as I did not have an alarm in place we weren’t covered for any of the stolen equipment. Horrid. Now THAT was a bad day.

And this only brings us a year or two into it – I suppose that there would be chapters to write to tell all the tales……….

I must say – that if we knew then when we know now, we probably would never have done it. Really! Good thing that ignorance is bliss. Let’s face it – we were without the internet to “scare” us off with “TMI” about our 80% likelihood of failure. And so we thought, like the little red engine, that we could. So we did. With every breath, we lived and breathed the business. Those were long days, late nights and endless weeks that bled into months. But in looking back, I don’t suppose I would have wanted it any other way. We are thankful to staff, family, friends and clients who have supported and guided us all the way.

The chapters of a business’ timeline are like the chapters of a recipe book. The ingredients vary, the prep time is never the same, over cook it and you are screwed, and the final outcome is always “the sum of ALL parts” – just having the sugar doesn’t make cotton candy……………. Indeed it was our dedicated staff and willing clientele that made this pavlova rise. 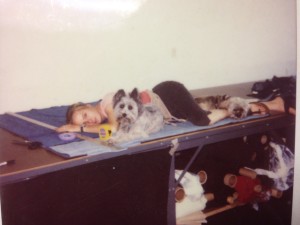 Megan sleeping at the warehouse on the cutting table, with some furry friends, Romeo and Sweetie, in the early days

“Out of the Box” Custom Backdrop for Josh Groban Tour

A few months ago, we received an email from Narci Martinez, Production Manager for Josh Groban’s 2013 Tour. The set design, created by Calvin “Mac” Mosier, called out for an unusual backdrop to provide texture, dimension, depth and movement.  Narci was confident that the backdrop design, though “out of the box,” was right up our alley.

Manufactured from hundreds of fabric squares, painstakingly cut out and sewn together to make each square double-sided, and then attached together at the corners with grommets and steel rings, this custom band backdrop has texture, movement and depth. Utilizing a random pattern of creased and crushed fabrics (including FR Textura, FR Creased Taffeta and FR Crushed Taffeta) in shades of white, ivory and silver provided the desired textural element. Movement and depth were created by leaving slack between the squares, so that each square dips at the top. 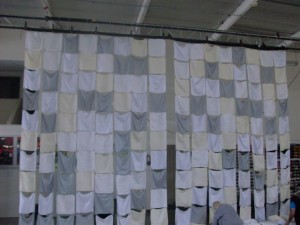 Adding to the versatility of the backdrop is that, rather than consisting of a single backdrop, the piece was manufactured in five individual 30’ h x 10’ wide sections, giving production the option of varying the number of panels used based on the stage width at each venue. For smaller stages, production can utilize just three or four of the panels; for larger venues, all five are used. Regardless of the number of panels used, visually the panels appear as one backdrop onstage. 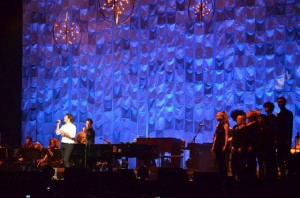 The lighting in particular is enhanced by the random pattern and varying colors and textures of the fabric, as well as the “dips.” Seeing the backdrop onstage during a recent show demonstrates how the different colored spots read as lighter and darker depending on the color and texture of the fabric used on each square, giving amazing dimension to the backdrop.  Beautiful! 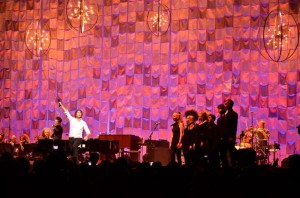