When Jeremy Roth, lighting designer for the alternative rock band Wilco emailed over his design concept for theatrical swags, it was a Sew What? first.

Anyone familiar with Wilco’s music knows that it is a far cry from traditional – blending tones of folk, indie and experimental rock to create an audio version of an unpredictable asymmetrical balance of ‘art’ for the ol’ ear drum. By utilizing a gauzy textile called Spider Stretch, the visual stage design emulates the ‘audible design’ of their albums – a little off-beat-sweet blended with a slightly trashy romance of ghostly familiarity. 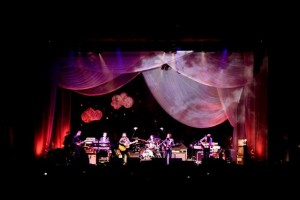 White Spider Stretch, a fabric traditionally used for lighting and shadow effects, was sewn into a family of half and whole swags in varying heights, widths, and fullnesses, along with two sets of legs, to create the off-kilter balance of drape apparitions that Jeremy was able to light with varying colors throughout the show, and even project onto. “The drapes are fabulous. The sheerness and fullness of the material was even better than I had anticipated and the custom sewing is really well done,” boasted Jeremy after seeing his creation hit the stage and lit up for the first time.

An upstage metal mesh drape as well as custom lighting elements completed the look for their current Americanarama tour alongside Bob Dylan and My Morning Jacket.