Back in March, we were contacted by designer Dan Hadley regarding a design project he was working on for electronic music group The Postal Service.    For the band’s North American tour, the design had used a hard set for the majority of the design.  The main focus of the hard set was a series of rows of 1 1/2″ metal pipes running in a configuration above the heads of the band members and then down behind them.

Dan’s goal was to replicate the same look for the band’s European tour, but to utilize a soft set of fabric drapes rather than the metal pipes.   The challenge was to come up with a drapery design that would give the illusion of rows of 1 ½” individual metal pipes.  While fabric could certainly be cut into narrow strips, such strips on their own would not have the rigidity needed to simulate the pipe structure.

Through a series of phone calls, emails, and other collaborative efforts, a drapery design solution was reached.  A series of 18 drapes of about 1 foot in width were manufactured in FR Black Textilene®, a PVC mesh material that almost disappears under stage lighting. Appliqued onto the drapes were rows of 1 ½” strips of FR Silver Drizzle, chosen for its silver color and linear appearance, to give the illusion of the original metal pipes. 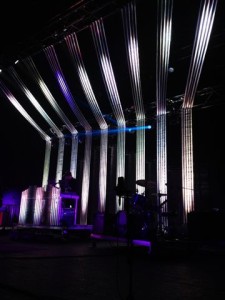