Putting the Metal in “Heavy Metal” for Black Sabbath

Home/Clients, News, Projects/Putting the Metal in “Heavy Metal” for Black Sabbath
Previous Next

Putting the Metal in “Heavy Metal” for Black Sabbath

Back in late March, we were excited to get a call from Baz Halpin, with Silent House Productions.  He had designed an amazing set for the Black Sabbath tour (an historic tour as it was the first tour with Ozzy Osbourne in more than thirty years), and he wanted our help in translating his innovative design into reality.

After receiving Baz’s initial designs, Shane Nelsen, Sew What? Creative Director and Senior Sales, met with Baz and his team at the Silent House office to further review Baz’s design and vision for the backdrop.  This meeting gave Shane the opportunity to hear more about the look Baz was going for and suggest materials and sewing methods that would take the design to reality.

During this collaboration, a design was approved utilizing FR Black 16oz Commando Cloth, FR Black Sharkstooth Scrim, and Silver Metal Mesh.  At that point, our sewing shop went into action, first manufacturing a custom flat black backdrop in Commando Cloth at 41′ 6″ h x 60′ w (split into three sections attached by velcro).  From that initial simple drape, our team of sewing staff began the transformation from basic to extraordinary by first judiciously cutting out sections, then inserting Sharkstooth Scrim behind the cutouts, crinkling and “distressing” the aluminum mesh, and then  finally appliqueing the aluminum mesh in strategically placed locations. 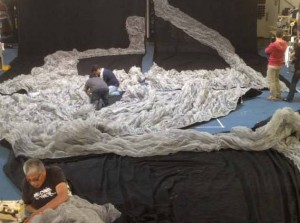 Sew What? manufacturing staff Roberto and Antonio, pinning mounds of aluminum mesh onto the backdrop.

On several occasions throughout the manufacturing process, members of Baz’s team came out to our shop to review the work and collobarate with Shane to tweak the design to achieve the desired ultimate “heavy metal” look. 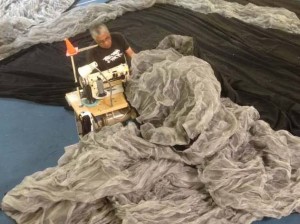 The final backdrop looked amazing in our shop, but the final touch was added by Silent House who, after receiving the backdrop from us, hung LED walls behind the scrim sections, allowing video images of the concert to be seen within the backdrop itself.   We were awestruck this morning to see a video of it live on stage in Auckland, New Zealand.  Take a look, and I think you will be awestruck as well!