Once a year, the music touring elite gather at the Pollstar Awards ceremony to honor the best of the best in the touring biz. This behind the scenes ceremony is the equivalent to a the “backstage” version of the Grammys. The back end work is what makes the artist’s show memorable and makes their tours run as smooth as butter melting on a freshly baked baguette. From tour promoters, to venues, to staging and lighting companies, you can’t get away with having a kick ass show without having the hundreds of people supporting, sacrificing, and schmoozing to get the top industry artists to where they are today. For those who made the trek last Thursday night to the Nokia Club in downtown L.A., all were greeted with a swank venue full of complimentary drinks and passed appetizers while being entertained by Mad TV’s Michael McDonald.

Rent What’s own crazy fun-loving ‘uncle’ in the biz, Bob Hughes of All Access Staging & Productions, accepted the award for best Staging or Equipment Company of the Year, presented by EDM spinner Deadmau5. Other presenters included Dave Stewart of the Eurythmics, as well as the mayor of Nashville, who will be hosting next year’s event.

Naturally, the Pollstar stage wouldn’t be dressed properly without the road-warrior-worthy soft goods line by Rent What? Inc, who generously donated for the event. Among the winners: a sexy White Poly Silk Austrian drape skinned by a diffusing poly-silk cyc which created dimensional texture with varying gobo projections and lighting tricks, and Low-Tech LED drapes flanked on the wing space that gave the atmosphere a soft programmable sparkle to enhance the mood each time an award was being announced. 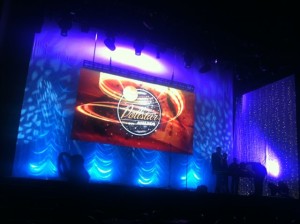 At the end of this night, and the beginning of any production, it’s the use of the correct ‘backbone’ soft goods that are the blank canvas that lighting and stage designers can use to create their visual magic.