We truly know that we are a “family of Whatters” around here, and what makes a group of people a family more than having a beloved family dog? We have already introduced you to our wonderful and brilliant little pup Crispin, and have discovered that company doggies are definitely all the rage. And rightfully so! Having a pet in the workplace has been proven to reduce blood pressure, help give you a positive break from the daily grind, and help elevate the collective mood and morale of the entire office. 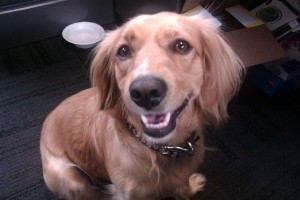 Once little Crispin entered our lives, we realized that we were now officially part of a “club of working dogs” in our industry, and have heard from many of our clients and vendors that their dogs are part of their teams, too. A few weeks ago we introduced you to Sadie, helping her human return some of our rental drapes, “keeping them safe” until they reached our warehouse. It definitely would not be show business without our four-footed friends keeping track of everything going on, and keeping us all in check! Here are a few other examples of some of the hardest working pooches in the industry. (Ok, so in many of the photos the doggies look fairly mellow, but it’s just them resting a little bit between helping solve any company-wide issues that may have just come up). 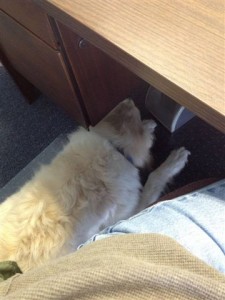 Xander from Rancho Dominguez – Selling widgets since he was a pup 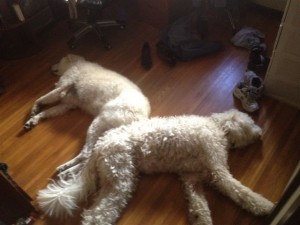 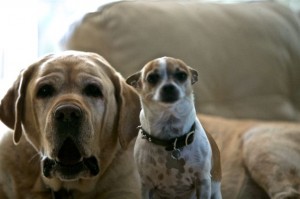 Odie and Bear from Malibu – Making movies and catching waves 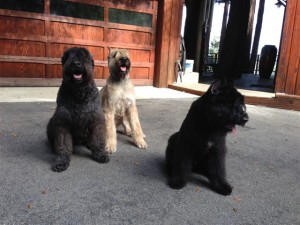 Roxy, Darth and Falco from Northern California – Making mischief along with some inspired decisions

History of the Grammy Awards

It is so interesting……. Sew What? has provided soft goods and concert stage drapes for the Grammy® Awards on numerous occasions over the years, however when recently quizzed at the lunch table I was unable to actually answer any questions regarding the history or the origin of the awards. So – rather than go out and get cold, this rainy lunch break I have decided to do a little research and learning – and thought I would share with you a summary of my findings – really quite interesting!

The Grammy® Awards actually had their origin in the Hollywood Walk of Fame project in the 1950s. As the recording executives chosen for the Walk of Fame (Tabinda Walk) committee worked to compile a list of important recording industry people who might qualify for a Walk of Fame star, they realized there were many more people who were leaders in their business who would never earn a star on Hollywood Boulevard. As such, a decision was made to create an award given “by the music industry” and “to the music industry”, and it would be somewhat similar to the already established “Oscars” and “Emmys”. After it was decided to create such an award, there was still a question of what to call it; one working title was the Eddie, to honor the inventor of the phonograph, Thomas Edison. Following this theme, they finally settled on using the name of the invention of Emile Berliner, the gramophone.

A Grammy Award (originally called Gramophone Award) is an accolade by the National Academy of Recording Arts and Sciences of the United States to recognize outstanding achievement in the music industry. It is the music equivalent to the Emmy Awards for television, the Tony Awards for stage performances, and the Academy Awards for motion pictures.

The first Grammy Awards ceremony was held on May 4, 1959, and it was set up to honor musical accomplishments by performers for the year 1958. Until 1971, awards ceremonies were held in both New York and Los Angeles, with winners accepting at one of the two. Nomination processes are detailed and lengthy, with various judging processes in place to conclude the winners. Since the early years with few categories, the awards have grown to become quite a complex and diverse presentation with many categories being honored. In the year 2011 there were in fact 109 official categories.. I am perhaps not alone in my inability to sit and watch 4 hours of programming – and as such in 2012 there was a major category overhaul – reducing the number of official categories in 2012 to 78. I believe the most notable category variance being that of no longer distinguishing between male and female solo artists.

The annual presentation ceremony features performances by prominent artists, and some of the awards of more popular interest are presented in a widely viewed televised ceremony. From the first telecast in 1959 thru to the 1971 introduction of “Live telecast” it has been a viewer favorite for the various broadcasting stations who over the years have hosted the programming. Now it is bigger and better than ever with incredible web presence throughout the year and a dedicated website. Broadcasts are televised live and there are no expenses spared in putting together the musical and visual spectacular. There is plenty for the viewer with awards ceremonies, musical production interludes, artist interviews and all the fun of televised after parties.

With 31 Grammy Awards, Sir Georg Solti is the artist with the most Grammy wins. Recording artist of worldwide fame Alison Krauss is the biggest winner among female artists with 27 awards. Big hitters U2, with 22 Grammy Awards, holds the record for most awards won by a group.

We recently produced for the 2012 “Latin” Grammys in Las Vegas some custom stage skirting / draping – Blue Satin for Blue Man Group – Gold crushed sheers for PitBull . We even built some softgoods for Michael Telo’s performance.  Over the years, we have been privileged to provide custom stage drapes, band backdrops, kabukis and much more for many Grammy Award-winning artists, including Rod Stewart, Stevie Nicks, Green Day, Linkin Park and many many more.

Earlier this year, we were contacted by world-renowned magician Bill Blagg for help with creating a new stage design for his tour The Magic of Bill Blagg. Naturally we brought in our favorite graphic designer John Rios, who jumped right in feet first.

John and Bill worked together for months as the design changed and evolved, but after several incarnations, the final design was in place, utilizing a combination of hard pieces (trusses) and soft goods.

From there, Gwen Winter stepped in to provide just the right custom stage curtains to meet the design specs. At 25’ h x 8’ w, these Metal Mesh drapes offer a dramatic look with a variety of lighting schemes – a perfect backdrop for this magic and illusion show. 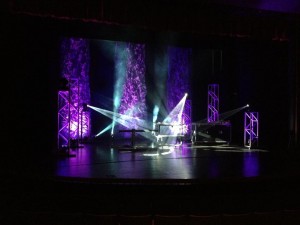 The new set was introduced to the show in mid-November, and Bill Blagg was thrilled with the result:

I’m happy to say we used the new items last weekend for a show and they looked GREAT!! 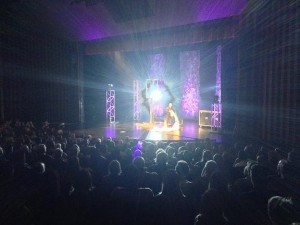 Tour dates are scheduled throughout 2013, so if you want a fun and entertaining evening, check out The Magic of Bill Blagg. 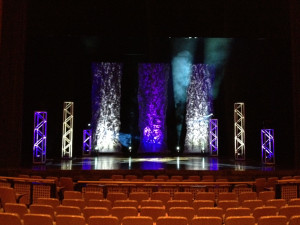 Want a similar look for a tour or special event?  Rent What? offers Metal Mesh drapes for rental as part of its Industrial Textures drapery series.

From behalf of all of us at Sew What? / Rent What?, I would like to wish all of you a happy, healthy and prosperous 2013.

We celebrated this year our 16th anniversary in business as Sew What? From those early days back in the garage, cutting fabric on the oak floorboards and shuffling the dinner off the table to make room for the sewing machine – indeed we have come a very long way. With us are so many familiar faces – employees from the onset and clients and vendors alike. For that fact alone we are indebted to those around us who have helped us grow and supported us through our many stages. Madison Street in a cozy 800 sq ft space, Vermont Avenue in a functional 6000 sq ft, and here on Gladwick Street in our very own luxurious and practical 15,000 sq ft. To those who have moved with us through the years…. thank you!

There has been great energy amongst the newly renamed “Whatter’s?, as this July 1st brought with it a change of ownership for Rent What? as it transitioned from a standalone corporation to one that is more integrated within the Sew What? family. With change always comes first the challenge of learning to fly, and then the excitement of watching the new arrangement find its wings and “take flight”. We are thrilled to have had such a strong and smooth transition, and look forward to continuing to service you with extreme service and quality softgood rentals.