Home/Digital Printing, Projects/The Power of the Quick Sketch
Previous Next

As I mentioned in my first post, I was contacted by Megan to work on the backdrops and other soft goods for Crue Fest II tour. I had the pleasure of working with a creative genius, Mr.Scott Holthaus, to help him manifest his vision for the show.

Crue Fest II celebrated a milestone anniversary for Motley Crue’s wildly successful Dr. Feelgood album. Every detail down to the CMYK value of the tiles was carefully considered. The concept was to create the insane asylum that is indicated on the Dr. Feelgood album cover as it would look if you revisited the facility twenty years later. The concept had vast possibilities so we decided to do a series of quick sketches first to narrow down a direction. Obviously these are not award winning illustrations but more so used like a storyboard would be in a movie. They indicate size, scale and perspective as well as content so that we can cut right to the chase on the computer once the direction is decided. It does take a person of vision, like Scott, but the end result is a faster development from an production art standpoint. This project was mammoth so it did take a few weeks to complete but, the quick sketches let us work out details and cut right to production worthy art within 24 hours of our first conversation. If you’re developing an involved or complex concept, I’d welcome working out the details with you in the same fashion. 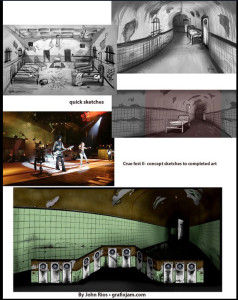