At Rent What?, we’ve built a number of drapery collections that can stand on their own or be combined with other collections to create a wide variety of looks.  This allows some many different combinations that every show or event can truly have a unique look.  I’ve posted previously about several of these collections – including “Timeless and Traditional,” Delightfully White,” and “Silver Satin.”  Today, I focus on our “Rockin’ Red” collection.

Lightweight and luscious. This Rockin’ Red Series has texture,durability and drapeability all sewn up.

Red domination – stand back and watch while this Rockin’ Red Series takes on the Big Borg. While we may be small, this series is mighty.

This is number 4 in my “Rockin’ Clients” series.  I am finding it really interesting to learn about the artists that we work with.  Most of the time, my focus is on the custom stage curtains and other soft goods that we make for the clients, but I may know very little about the background of the artists.  I hope that blog readers are enjoying learning about them as much as I am!

Alice in Chains began in the late 1980s / early 90s as part of the grunge movement in Seattle.  Formed by lead guitarist Jerry Cantrell and the late Layne Staley (lead vocalist), the band incorporates elements of grunge, heavy metal and acoustic into the band’s sound.  After recording several demos, the band was signed by Columbia Records in 1989.

The band’s first album, Facelift, was released in August 1990.  While it had limited success initially, MTV airplay of the video “Man in the Box” boosted album sales, and the album went gold by the end of the year.  The success of  Facelift propelled the band, and their second album, Dirt, went platinum and remained on the charts for close to a year.  They also released several EPs, including Jar of Flies, which debuted at number 1 on Billboard (the first and only EP to do so).

By 1994, Alice in Chains was experiencing difficulties, primarily due to the drug problems of founder/lead vocalist Layle Staley.  Though they did release the self-titled Alice in Chains in 1996 and play live concerts sporadically, Staley’s drug issues made it increasingly difficult for the band, and little original music was produced or released over the next six years.

Following Staley’s death in 2002, the remaining members of Alice in Chains remained on hiatus from the band, pursuing solo work and other pursuits.  In 2005, the band reunited to perform a benefit concert and other live and televised events, including reunion tours, adding William DuVall on vocals in 2006.  Black Gives Way to Blue, the band’s fourth studio album, was released in 2009.

The band has toured steadily in the late 2000s, reporting on its website in December 2010 that it had played “150 live shows in the past 16 months.”

We made some really interesting custom stage curtains in 2010 for Alice in Chains, including several silver kabukis and some metal mesh pieces.  There are some great photos and videos on this blog, if you want to check them out.

I’ve posted on a couple of our drapery collections – notably the “Delightfully White” and the “Silver Satin.”  What is great is that the different collections coordinate so well with each other.  Today I thought I’d tell you about another of our collections.

Capturing the timeless looks of old school theatre and French Burlesque is both naughty and nice.

Paramore, Monsters of Folk, and Don Henley have all performed adorned by our vintage velvets.

Rockin’ Red drapes bring out the best, Silver Satin swags tone it down – and Ivory Satin dresses it up.

More and more we find ourselves providing drapery to country music artists.  Today I’d like to focus on one of those artists, Kenny Chesney.

Kenny Chesney, born and raised in the Knoxville, TN, area, first began focusing on music during his first year of college, teaching himself to play guitar.   While pursuing a degree in Advertising  (awarded in 1990) from East Tennessee State College, Chesney pursued music as well, recording and self-releasing a demo album in 1989.

After graduation, Chesney headed for Nashville to focus on a career in music, where he played in several clubs in the city.  His initial “big break” came in 1992, when he was awarded a songwriter’s contract with Opryland Music Group.  This was followed a year later by an artist’s contract with Capricorn Records, which released his debut album, In My Wildest Dreams, in 1994.

When Capricorn Records closed its country division the next year, Chesney signed with BNA Records and released his second album, All I Need to Know in 1995, followed by Me and You in 1996.  While all three albums had moderate success, it was Chesney’s fourth album, I Will Stand, that included his first number 1 single, “She’s Got It All.”  Success has built with each successive album, which to date number 13.

Here at Sew What?, we are proud to have been selected to provide digitally printed backdrops and other drapery for Kenny Chesney for the last four years (including this year).  It’s an honor to know that our work is appreciated by Kenny, his production team, and his fans.

A couple of weeks ago, I posted about the “Delightfully White” Drapery Collection offered by Rent What?  We actually have several other drapery collections available for rent.

Today, I thought I’d share some fun and interesting information and facts about our Silver Satin Series for Rent What? Inc’s Drapery Collections.

Lights beautifully with a soft yet reflective finish. Not afraid of a hamper or a tour – this fabric is durable too.

Carrie Underwood, Jennifer Hudson and John Mayer have all performed before it.

Feels and looks best when hanging out with members of the Rockin’ Red Series.

A piece from this Silver Satin Series was recently spotted in the LA Times Calendar section.

To acquire new and modern pieces for this Silver Satin Series. Challenge us with your design – our team of fabric artists will create it for you. 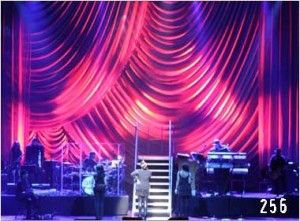