Home/Education/Focus On: Pleating Styles
Previous Next

I have posted in the past on the subject of fullness, but I realized this morning that I haven’t posted on a closely related subject – pleating styles.

Most people understand the concept of pleating (what American woman hasn’t had a pleated skirt at one time in her life?) – but I would guess that most don’t realize how many different styles of pleating there are for drapes.  Today I thought I’d shed a little light on pleating options.

A box pleat  is created by bringing the fabric together to form a loop on the face of the drape.  This loop is then flattened against the face of the drape in equal parts to either side, making a “box” shape, and is then sewn into place.  Depending on the amount of fullness desired, the size of the box pleat may range from about 3″ to 6″ or more in width.  Box pleating is frequently used for heavier napped fabrics such as cotton and synthetic velour, though it can be used on nearly any type of drapery fabric, including sheers, satins, and other lightweight fabrics (as with the White Voile drapes that we made for Rod Stewart in 2008).

Box pleating is the style most used in traditional stage drapery, and the preferred style of pleating here at Sew What?  As a matter of fact, I would estimate that at least 95% of the pleated custom stage curtains that we make here are box pleated. 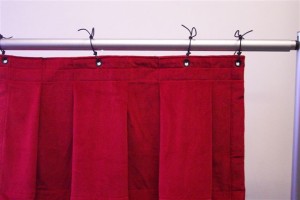 While not technically a style of pleating, shirring is also used to create fullness in drapery, by gathering the fabric together to create gentle folds.  Shirring may be done manually, by stitching two parallel lines of strong thread across the top of the drape and then pushing the fabric together across the thread to form the gathers.  Another method is to sew shirring tape across the top of the flat drape and then pull the built-in strings to gather the drape.  Shirring is most often used on very lightweight fabrics such as voiles for a looser, more subtle form of pleating.

For pinch pleats, a single pleat is created and then sectioned off make two or three more narrow pleats, and then sewn at the bottom of the header to keep the pleats together.  Traditionally, drapery hooks are inserted in the box of each pleat in order to hang the drape from a traverse drapery rod, allowing the drape to be easily opened or closed through a cord operation.  Today, however, there is also the option to utilize pinch-pleated drapes with clips and rings, for manual operation.