Last month, we worked on a really interesting project, and I just had to share (especially after seeing the gorgeous photos and videos).  I love all of the custom stage curtains, digitally printed backdrops, and other specialty soft goods that we make, but it is particularly fascinating for me when we do projects that are more unique.

Katy Perry was scheduled to appear on VH1’s “Salute The Troops” special on December 5th, and she wanted to appear on stage in a very dramatic way – by parachute!

Naturally, she couldn’t really parachute on stage, but it certainly appeared as if she did, in a very patriotic way, and I am proud to say that Sew What? played a part in making it happen.

The parachute structure began as two custom steel frames, which fit together to mimic the shape of an open parachute.  The frames were then delivered to us, and our sewing shop got busy with red, white and blue stretch fabric.  It was a little tricky, as it was important to carefully match each stripe to the contours of the frames.  The end result?  An American Flag “Parachute.”

I thought it looked amazing in our sewing shop, but I was floored to see how spectacular it looked in use.  With the parachute suspended from above by unobstrusive cables, and Katy Perry hanging from the “parachute” by more noticeable white cables, it really did appear as if she was parachuting down onto the stage.  Very dramatic, don’t you think? 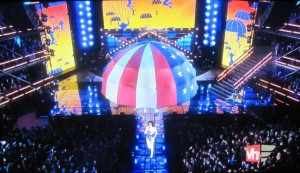 If you didn’t get a chance to catch the show and want to see more, you can go to the VH1 Divas “Salute the Troops” page to check videos, photos, and much more, or check out this article in London’s Daily Mail.