Based in the UK, Masternaut Three X provides tracking and related mobile applications for vehicles and other assets.  The company recently opened facilities in Sydney, Australia.

Task Retail is one of the leading providers of Point of Sale (POS) technology in Australia.  The company was award the Dell Computers Small Business Excellence Award in 2008 (the same award granted to Sew What? in 2006), along with numerous other awards.

Founded more than thirty years ago, Lonely Planet now publishes more than 500 titles of guidebooks for locations throughout the globe.  Based in Melbourne, Australia, for much of that time, the company now also has offices in London and Oakland.

You may remember Megan mentioning, in a post back in March, that one of the awards that Sew What? was been given over the years is the Inc 500/5000 award.  To tell you a little bit about it, it is an award presented each year by Inc. Magazine to the 500 and 5000 fastest growing private companies in the United States.

This year is particularly exciting, because Megan was invited to participate in the Inc 500/5000 Conference and Awards Ceremony as one of the Mainstage speakers!  She will be supporting Steve D. Felice, President of  Consumer, Small and Medium Business at Dell Computers, in a presentation on technology in small business, with Megan discussing the ways in which technology has helped Sew What? to grow dramatically over the last ten years.

The conference takes place in Washington D.C. from September 30th to October 2nd.

As you may recall, last year about this time, Megan was selected by Dell Computers as a “Trailblazer” for its “Take Your Own Path” Campaign.  It was a real honor for Megan and Sew What? to be selected, and Megan enjoyed participating in various events related to “Take Your Own Path.”

Recently, Megan was contacted again by Dell Computers.  They were launching the “Take Your Own Path” Campaign in Australia, and they wanted Megan to be a part of it.  As a native of Australia who is now a US citizen and resident, Megan was delighted to return to Australia to share her story about the many ways that technology has enabled Sew What? to grow and develop over the years.

In a few weeks, Megan will be heading over to Australia to meet her fellow trailblazers and share her story.  I’m sure she’ll have lots of stories to share on this blog – I’ll keep you posted!

We talk about “Rock-N-Roll” here all the time, having provided custom stage drapes and digital backdrops to the tours of so many rock artists/bands. The fact of the matter, though, is that we have worked with productions for artists and bands from many different music genres, including pop, jazz, classical, folk, and much more.

Recently, we have found ourselves working on soft goods for more and more country artists and bands. A couple of projects spring to mind. We have been so fortunate to be selected to provide digitally printed backdrops to the Kenny Chesney Tour for three years in a row. This year’s backdrop was printed in-house on a semi-translucent fabric to allow for backlighting.  After topically treating the printed backdrop for flame retardancy, our manufacturing staff the digitally printed panels into a Braille Curtain, 37′ h x 58′ w, with lift lines every 4 feet. 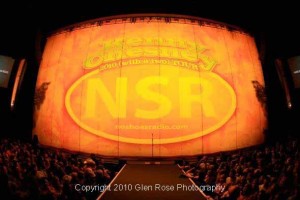 Lady Antebellum is a country band whom we have recently begun to work with.  We were approached by the production designer for Lady Antebellum, with a request for a Braille Curtain.  But this time, the designer was looking for something different – a curtain that would combine the scenic properties of a digital backdrop with the “stage magic” of scrim.  We offered the perfect solution – direct printing onto sharkstooth scrim.  When properly front-lit, the fabric appears opaque, and the printed image can be clearly seen (as if it were an image printed on traditional fabric).  Once the front light is turned off and lights come up behind it, the scrim “disappears.”

Though we tend to think of ourselves as “Rock-n-Roll,” the truth is that we are fans of live music and production, regardless of the music genre – we just love to be a part of the show!

Well, after a relatively light list of anniversaries for June and July, I am back with a longer list for August and September.

These staff members have a combined 29 years at Sew What?  Pretty great, don’t you think?