Antonio has been with Sew What? for two years 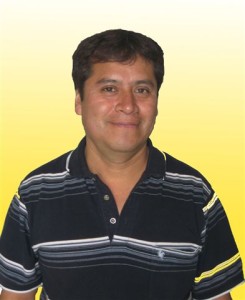 What kind of work did you do before coming to Sew What? I sewed shirts and pants for a company in downtown L.A.

What do you like most about your job and why? I always liked the idea of sewing drapery, so when I saw the ad in the paper, I came. Something about theatrical drape was very interesting.

What keeps you motivated at work? More than anything, my coworkers. I get along with mostly everyone.

What would be your Karaoke song of choice? Vicente Fernandez – Las Llaves de Mi Alma.

What is your favorite dessert? Cheesecake.

Ever wondered how music tours achieve the “starry night” effect onstage?  Well, for years they have used drapes with embedded fiber optics.  But the fiber optics tended to be bulky and difficult to manuever.

Today, more and more, fiber optics are being replaced by LEDs to produce a stunning light display that mimics the appearance of a gorgeous starry night.  These LED Star Drops are manufactured utilizing a durable black synthetic velour on the face along with a strong but lightweight black lining, with strings of LED lights inserted between the face and the lining.  A controller (which can be used on its own or with a lighting board) is used to manipulate the pattern, frequency (speed) and intensity of the blinking “stars.”

Our sister company, Rent What?, has found these LED Star Drops to be quite popular in their rental inventory.  As a matter of fact, last year they were used by the “So You Think You Can Dance?” tour (among others).  Want to learn more?  Check out the “Starlight LED Backdrops” page on the Rent What? website.

Putting the “art” in a craft business

When most people think about sewing (whether it is custom stage drapes or handmade quilts or apparel), they generally think of it as a craft rather than an art.  And I think that is generally a valid way to categorize sewn goods.  But you would be surprised at how much “art” actually comes to play in the creation of what is known in the entertainment industry as “soft goods.”

When a major music tour is being planned, much more is involved than simply the music itself (the set list, the rehearsals, etc.).  Concerts today are  more than musicians on a stage, singing and playing.  Sound, lighting, special effects, pyrotechnics, and set design all work together to give the audience an experience for the ears and the eyes.  And soft goods are often a major part of that.

The role of the Production Designer is to design a set (which may include both soft goods and hardscape) that provides a stunning visual backdrop to the music.  Once the design is created (the “art”), the Production Designer brings in all of the crafts (sewing, stage builders, etc.) and charges them to make his artistic vision a reality.

That is where we come in.  The Production Designer presents us with his vision (it may be in the form of an artistic drawing, a technical drawing, or even a verbal sketch), and it is up to us to figure out how to best achieve that vision through stage curtains, painted or digital backdrops, and even mixed media pieces.  The Production Designer relies on us to recommend fabrics and construction methods that will carry his design from paper (or just his head) to the stage.

At times, it is relatively straightforward – perhaps an Austrian Drape or a series of Swags.  Other times, however, it takes skill and ingenuity (and, dare I say, art?) to figure out the best way to manipulate fabrics (and other materials) to achieve the look.

One example that springs to mind is the project we did for Mariah Carey last fall.  The designer knew the look he was after, but it was up to us to find a way to achieve that look.  Gwen Winter, the Senior Sales Rep on the project, knew that traditional stage fabric, such as velour, was out of the question.  The solution?  Clear vinyl, hundreds of silk flowers, and sheer net, along with the experience and skill of our manufacturing staff, turned the designer’s vision into reality.

Another example is the Maxwell 2009 project, in which Sew What? and Rent What? joined forces to help the production designer achieve his vision through the use of fabric (Black Mirror Sequins and “tattered” White Voile) and other media (mirror shards), with Rent What? bringing more drapery to the table (including Silver Satin Austrian Drapes and Swags and an LED Star Drop).

These are just two examples (out of many), but I think they are great illustrations of how closely connected “craft” is with “art.”  We may be a craft, but part of that craft is taking the “art” and making it a reality.  And I am so proud of the way our team accomplishes that reality.

Carley’s Having a Baby!

Carley, our Purchasing Agent, is getting close to her due date (early September), and we are all so excited for her and her husband Caleb.  It has been great to follow her along in the process, see the Ultrasound photos, and find out it’s a girl!

A couple of weeks ago, Silvia (you know her, she is a contributor to this blog) threw a baby shower at her home for Carley, and we had a great time.  Check out Carley opening baby gifts: 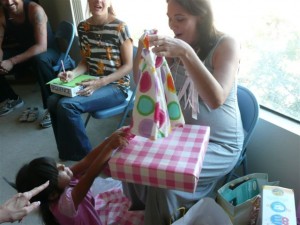 Silvia made some great food for the shower (love those potato tacos!), and Violet brought some darling ladybug cupcakes – yum! Now, we are all waiting with bated breath for the big day (and waiting to find out the new baby’s name).  We are going to miss Carley a lot while she is out on maternity leave (could happen any day now), but we are so excited for her and Caleb to be welcoming their first child.

Congrats to Carley, Caleb, and their entire extended family!

I don’t know if you are familiar with iL CiRCo, but if you aren’t, you should definitely check it out.  Based in San Diego but appearing throughout the world, iL CiRCo is a troupe of singers, dancers, acrobats, and a variety of performers that put on amazing shows!

We were pleased to be asked to make custom stage drapes for the troupe earlier this year, and were really excited recently to receive a short performance video from the client showing our drapery “in action” in Panama.  Unfortunately, I am unable to attach the video to this post, but I was able to pull out a still photo from it. 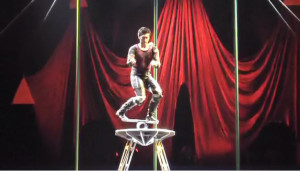 Isn’t the drapery gorgeous?  I really think it fits the mood of the show – ethereal, whimsical, and just a little fantastical.  The drapery is made from FR Crushed Glimmerene in Magenta.  Glimmerene is a gorgeous fabric with a beautiful shimmery, almost iridescent quality.

I love the way the fabric drape hangs in a serious of swags and openings, with the height of the drape ranging from 34′ high in the center down to 22′ high on either side.  And I am even more happy to say that the client, Imagination Entertainment, was so pleased that they have recently ordered a second identical drape!