By now, I am sure that you know about last month’s flooding in Nashville.  The area was devastated, with many homes and businesses affected.  One area that really hit home for us here was the effect the flooding had on Soundcheck and other music related businesses in the area (many of whom are our customers and friends).

You might not be familiar with Soundcheck, but it is a music rehearsal and storage facility utilized by many, many recording artists, both from country music and from rock and roll, to store their instruments, amps, equipment, and even stage drapes and skirting.

And Soundcheck is just one example.  Nashville is a city with a tremendous focus on music, and so there are a number of staging companies, storage facilities, rehearsal facilities, and the like that have been affected by the flooding.

And the losses aren’t limited to instruments and amps.  There’s lighting equipment and sound boards and a host of other equipment pieces.  And there are soft goods.  You don’t read about that in the newspapers, but there were hundreds of thousands of dollars in stage drapery and skirting stored in Soundcheck and various other places in Nashville.

In some cases, unique custom drapery pieces, designed specifically for an artist or band, were lost in the flood.  That is one type of soft goods loss – a few pieces, each with a relatively high dollar value.  But in many cases, the loss was one of quantity – a single stage skirt or basic masking drape is relatively inexpensive to replace, but for a company that has lost their entire inventory (hundreds of skirts and masking drapes) in the flooding, the dollar loss can add up to a devastating financial hit.  And that is just on the soft goods.  That isn’t including damage to other equipment or to their offices and facilities.

One of our long-time customers with a facility in Nashville sent us some photos of the flooding – I just had to share: 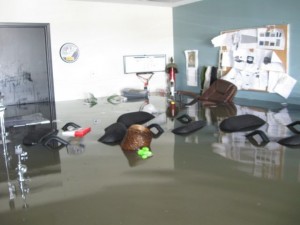 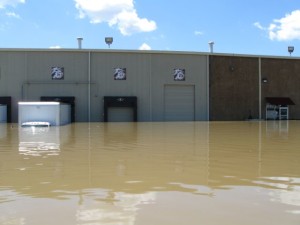 So, the next time you head out to a concert, and you start to complain (either silently to yourself or to the person next to you) about the price of the concert, think about all that has been lost in the Nashville flooding – millions of dollars worth of instruments, equipment, and soft goods (much of it not insured), and priceless pieces of history.

And think about the fact that maybe, just maybe, a little bit of the price of your ticket is going to pay a staging company that is trying to recover from flood losses, or to pay (for the second time) for the instruments and equipment and drapery that is all on stage, designed to give you a memorable experience.  Maybe then the price of admission won’t seem that high.