Backdrops for Tegan and Sara

Home/Digital Printing, Projects/Backdrops for Tegan and Sara
Previous Next

Backdrops for Tegan and Sara

We worked on a fun digital printing project last month with Benjamin Price, and he recently sent us some great photos that I thought I’d share.

Benjamin was working on the Tegan and Sara tour (if you aren’t familiar with Tegan and Sara, they are a Canadian indie band lead by twin sisters Tegan Quin and Sara Quin).  While looking for a provider of wide format digital printing for a series of custom backdrops for the tour, Benjamin contacted Megan, and we were off and running.

Rather than make one large backdrop, the decision was made to instead print a series of five backdrops, each 24′ h x 6′ w.   Emmy Story’s artwork, composed of a series of diagonal colored lines, is beautiful in and of itself, but the repetition and crossover that occurs when hanging the five panels side by side with space in between, emphasizes the drama of the artwork. 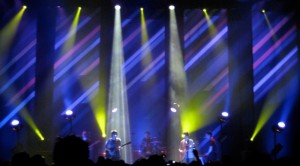 Lighting also plays a big part in creating a dramatic effect.  The backdrops were backlit using 2 Martin stage bars per panel – one for a short throw and one for a long throw.  During portions of the show, they were also frontlit using a Martin Mac 700 profile with a custom Bar gobo for each panel.  Here’s another photo to show the effect that lighting has one the artwork: 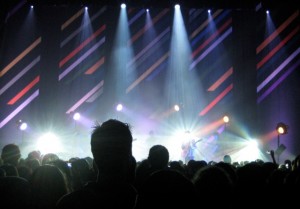 This really was a fun project to work on – it is so rewarding in our business to have the opportunity to work on digital backdrops, custom stage curtains, and other soft goods for so many talented artists such as Tegan and Sara, and to see our work looking so gorgeous on stage as in these photos.