Sew What? seen all over the world

A while back, I posted some photos of our Sew What? drapery bag in Germany and our tee shirt Italy.  This time, Sew What? has travelled even further – to the Middle East.

Take a gander at some folks with our drapery bags, preparing for an event in Doha, Qatar: 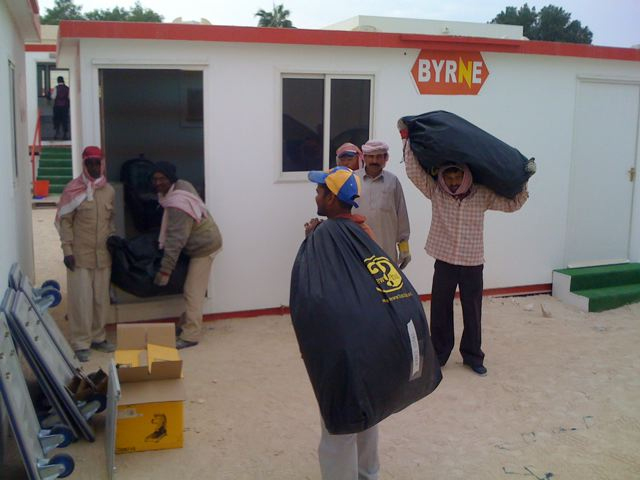 Now, I must confess that I had very little knowledge of Qatar prior to this project (I wasn’t exactly a geography wiz in school)…in case you are the same, here is the scoop according to Wikipedia.  Qatar is an Arab Emirate in the Middle East, surrounded by the Persian Gulf and Saudi Arabia.  It is an oil-rich state ruled by a monarchy. 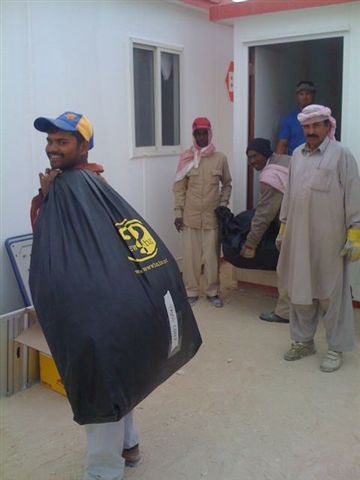 It really is fascinating to see our bags in locales throughout the world.  It is so easy to sit here in my office in Southern California and forget that our custom stage curtains, backdrops, and other soft goods really do get used by customers in places like Germany, Italy, and even Qatar.  I love it – I get the chance to travel vicariously! 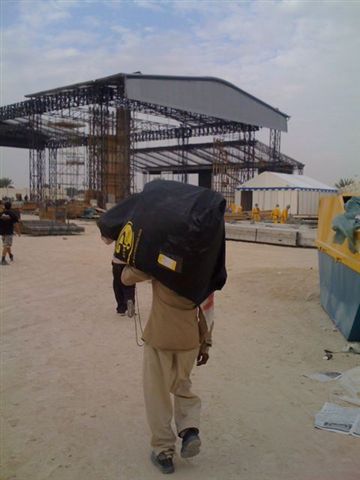 I don’t know if I will ever travel to Qatar, but if I don’t, at least I know that a little piece of Sew What? has!

It seems that December is a slow month for hiring.  In looking at my employee anniversary list, I realized that we have only one anniversary this month.

With the holidays this month and the year ending, I guess that hiring is a low priority in December.  However, even one anniversary is special to us!

Recently, during a web search, I came across a company advertising that their drapes were flame retardant according to British, European, US and World standards.  I was flabbergasted.

As I have mentioned before, standards and regulations regarding flame retardancy of stage curtains vary widely, both within the United States and throughout the world.  In the United States alone, there is NFPA 701 (national standard, but not an official law or regulation), California Title 19, New York City regulations, Boston regulations, and who knows how many more.  In Europe, there is Britian’s BS 5438, Germany’s B1 & B2, and France’s M1, and perhaps others that I don’t know about.  (Apparently, there is also a unified European Union standard, but it has yet to be approved and adopted fully throughout Europe).  From what I understand, there are yet more regulations in Asia and elsewhere in the world.

So how can one company state that their drapes meet FR standards for the entire world?  I suppose it is possible that a fabric could meet all FR standards in the world, but has this company actually had the drapes tested to every single standard in the world (there must be dozens, perhaps even a hundred or more different standards)?  I doubt it.  And, frankly, I can’t imagine any company actually providing a Certificate of Flame Retardancy covering every FR standard in every country in the world.   So I don’t understand how a company could make such a statement on their website.

No wonder people are confused about FR standards!

Once again, both Sew What? and Rent What? were asked to provide soft goods to a single tour – David Archuleta’s Christmas 2009 tour – and I think this one turned out particularly great, as both companies thought “outside the box” to create some unique pieces for the show based on a fabulous set design created by Butch Allen.

Rent What? provided the drapery – in this case it included Gold Lightweight Synthetic Velour Legs and Swags from their “Timeless and Traditional” Series, all wrapped up with giant red and gold bows for a perfect Christmas presentation. 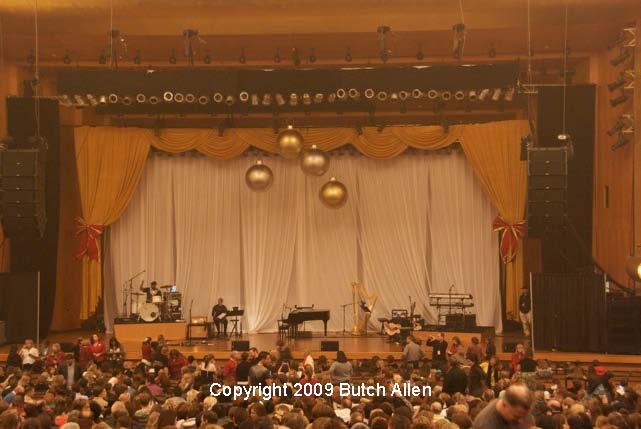 What I think takes the drapery to another level, though,  is the incredible “twinkle-light” drape.  We’ve made traditional LED Star Drops before, but this drape was different .  For this drape, low resolution twinkle lights were inserted into a sheer white voile – the result is just gorgeous and reminds me of snow falling. 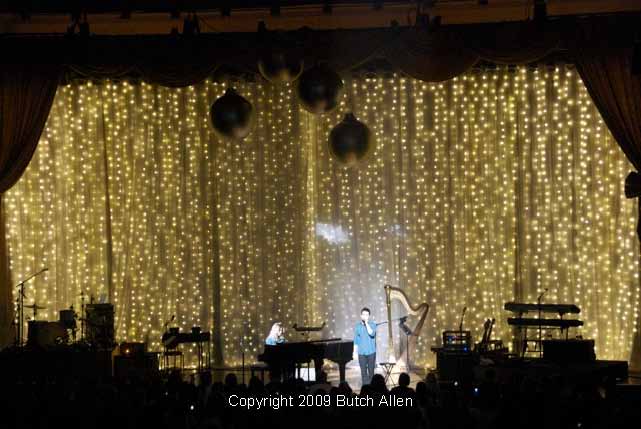 Sew What? also got in the act, making some gold satin skirts along with some fun three-dimensional Christmas Trees out of White Cambio! stretch fabric.  There were five trees, ranging in from 8′ to 16′ in height, and depending on how they were lit, they appear gold/white, blue/white, or green.  Here’s how they look in green: 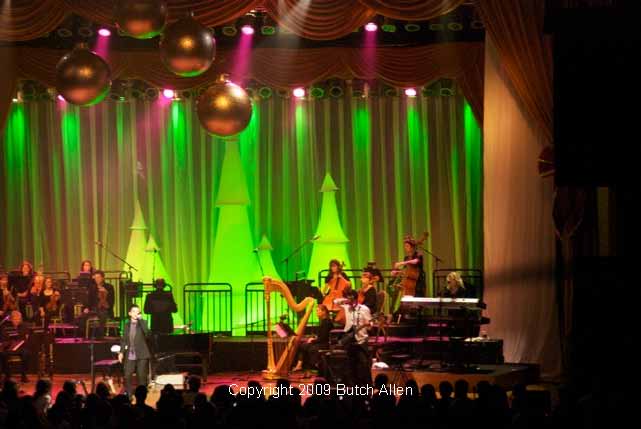 All in all, the combination of the beautiful drapery provided by Rent What? and the fun Christmas Trees provided by Sew What? sets the stage for a fun and festive holiday show.  Want to see more photos?  Check out the Concerts and Curtains Photostream on Flickr.

Just got a fun Google alert…the word “scrim” was used in the LA Times Crossword Puzzle on December 7th, and information on it was posted on the blog “L.A. Crossword Confidential.”  A number of people left comments asking what scrim is, and one blogger, JOHNSNEVERHOME, gave a brief explanation and then posted a link to “Description of Stage Curtains” page of the Sew What? Inc. website.

Anyway, I really enjoyed this unexpected reference to us.  If you’d like to check it out, go here and scroll down through the comments a bit.