Alberto has been with Sew What? for 7 years 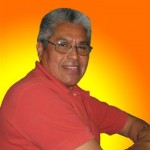 If you could take a vacation to any place in the world, where would you go, and why?  I would go to Mexico, because I haven’t been in a long time, and I’d like to go remember the good times I had in Mexico City D. F.  I’d also like to go visit the graves of my loved ones who have passed there.

Who is your favorite music artist?  Ray Conniff and Santana

Do you have a special talent?  I sew.

What is your favorite movie or TV show?  The Six O’Clock News in Spanish.  I never miss it.

What project have you worked on recently that was interesting or challenging?  The one we worked on last week where we had to glue acrylic pieces on soft goods.  It was tedious and required lots of manuevering, but I thought it was different and I loved it. (Note: Alberto is referring to a mixed media project using mirrors that we did for the Maxwell tour).

Picture this.  You are at a concert.  The opening act has just finished playing, and the crew has removed all of the band’s instruments and equipment, leaving only the drape that the band played in front of.  The music starts, signalling that the main act is about to appear.  Suddenly, the headlining band appears on stage, as if from nowhere.  What just happened?  Another piece of stage magic, called the Kabuki.

There are two types of Kabukis, the Single Kabuki and the Double Kabuki, but they both work on the same principle – the use of electrically-powered magnetic systems called solenoids.  A solenoid resembles a small box with a pin sticking out.  A series of small solenoid boxes are attached in a daisy-chain row on a truss.  At one end, this chain of solenoids is plugged into electricity and attached to a controller switch.

For a Single Kabuki, the drape is sewn with loop velcro on the top, on both front and back.  D-Ring Velcro attachments are then made by taking a single piece of hook velcro, looping it through the flat edge of the D-Ring (with the hook side facing in), and then sewing the Velcro together tight to the edge.  This leaves a D-Ring with an upside-down V-shaped piece of Velcro attached.

The D-Rings are then attached to the top of the Kabuki Drape by sandwiching the top of the drape, with its loop velcro on both front and back, with the hook velcro on the D-Ring.  (Think of the Velcro on the D-rings as the bread and the top of the drape as the filling).  The result is a drape with adjustable D-Rings across the top.  Adjustability is key as solenoid placement on the truss can vary, and it is essential that the drapery D-Rings line up to the solenoid.  This is why this velcro system is generally used, rather than sewing the D-rings directly to the top of the Kabuki.  The best thing about using a Velcro D-ring is that the drop can be manually pulled down if a solenoid fails to release.

The Single Kabuki is then hung on the solenoid pins, appearing to the audience just the same as any other drape.  However, when the time comes to reveal to the audience what is behind the drape, the crew pushes a switch.  The switch causes the pins to retract and, as a result, the pins release the D-rings and the Kabuki drops to the ground.  And the band appears as if from nowhere.

So that’s a Single Kabuki.  I’ll tell about two other similar pieces, the Double Kabuki and the Poor Man’s Kabuki (also called a Tear-Away) in a future post.

I was in New York City just 2 weeks ago – a wonderful opportunity – to speak to some media about our business and the importance of technology in our business model.  We are thrilled and delighted to have been recognized by Dell Computer as a “Trailblazing” company.  Indeed – we do choose our own path and always have.  We did not always choose Dell – not in the early days when I first started – but ever since we discovered the important role that technology plays in a small business.

I am a big fan of the Internet – ever since we lost a large contract some years ago – when the US car manufacturer said to me “your numbers for your theatrical drapes are great, your staging product is perfect – but we just can’t award you the special event contract as you don’t have a website.  Having a website is one of our vendor authentication criteria.”

WHAT? Did you just say that we did not get the job despite being the most competitively priced because we don’t have a website?

Bah humbug.  Some tears and a few beers later, I had a website all right.  By that weekend’s end, I had built one – clip art and all.  To no avail – it was too late, and they weren’t interested in reopening the bid.

Thanks to my homegrown website, clients began to find us ever so slowly on the Internet – now, we are talking the early 2000’s, so it was not the norm to “google” things.  Phone books and directories were still relatively cool.  And hard-copied printed resources were still go-to must-haves.  It didn’t matter, did it, that I had clip art?  It was cute!  Really cute…..like needles and thread, thimbles and buttons.  Oh – there aren’t buttons on drapes – I knew that – but I did not think that my web visitors did.  WRONG.

WHAT? Did you just say that we did not get the job despite being the most competitively priced because we have clip art on our website?

Now – armed with a flurry of experts in SEO and design, we finally nailed it – and the clients came!  No clip art.  Complete credibility.  We were a real company!

So the phone rang and the Internet inquiries arrived in our inboxes.  But we had no infrastructure…….so they called, but I had no record of who they were.  They requested a quote from me and then separately from a coworker – we had no idea that we were both servicing the same account.  Nor were we consistent with our pricing.  The clients were confused.  How could we forget them…..or not know their mailing address.

WHAT? Did you just say that we did not get the job despite being the most competitively priced because we had no technology on the front end and were still writing orders in #2 lead pencils on the back of cocktail napkins?

WHAT? Did you just say that we are now a player in the Theatrical Drapery Manufacturing marketplace because we are credible, believable and organized?  WOW.  This is fantastic news.

This has been a real adventure to say the least – to get from there to here.  I’ve loved every minute of it and am so thrilled to have brought so many friends, family and clients along for the ride.

Sew What?  Sew This!

Another link – Manage the Tour

I recently discovered a cool blog called “Manage the Tour.”  The purpose of the blog is to provide “an online resource of stories, suggestions and ideas for aspiring tour managers.”

Despite working for a company that makes custom stage curtains, digitally printed backdrops, and a host of other soft goods for the tours of bands and artists big and small (and despite the fact that Sew What? Inc was founded by a former “roadie”), I myself have never toured with a band.  So I am fascinated to read Bradford’s suggestions for aspiring tour managers (including small bands that are doing the tour management themselves).

I know how “glamorous” the life of a touring with a band sounds to those of us who have never done it – you can read a few of Megan’s recent posts to see that its not all fun and games!  The thing that I like about Manage the Tour is that Bradford gives practical advice to aspiring tour managers but also manages to be interesting to those (like me) who only dream.

I found this post particularly interesting, although I have to admit that it first caught my eye because of the similarity in the title to Sew What?

Daniel has been with Sew What? for two years. 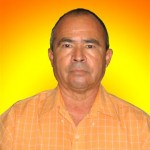 If you could take a vacation to anywhere in the world, where would you go?  Rome, because that is where Jesus Christ travelled.  I want to get to know the holy land.

Who are your favorite music artists?  Mariachi Vargas, the best in the world, and Los Hermanos Martinez Gil.

Do you have a special talent? I am a businessman.  I learned here in the United States.

What is your favorite movie or TV show?  The news.

What is your favorite memory of Sew What? All of you

What project have you worked on recently that was particularly interesting or challenging? I give all projects the same enthusiasm, be they large or small.  They all interest me equally, and I love getting organized to complete my daily tasks.  I want to always give 100%.