Sew What? Goes to Class

Last month, I got a comment on my post Reader Poll: Price vs. Service from Scott Smith.  Scott, in addition to being the Vice President of Watson Companies, a domestic auto dealer, is also pursuing his MBA with the University of the Southwest.

In the course of a couple of e-mails back and forth with Scott, I learned that they had used Sew What? Inc. as a case study in his class.  Apparently, we were featured in the textbook “Management Information Systems.”  Scott said that they studied our “use of IT (information technology) pertaining to the manufacturing processes and the uses of IT in streamlining manufacturing and customer satisfaction.”  Another graduate student e-mailed us and mentioned that he was also studying our company in his MBA class at Florida Tech.

It is almost surreal to think of Sew What? Inc., a small family-owned niche company making custom stage curtains and digitally printed backdrops, being featured as a case study for a college textbook and in MBA classes!  But it reinforces all that we have tried to do over the last few years, in terms of building our technological infrastructure to become more efficient and better able to meet our customer’s needs (more on that in future posts).

I recently learned about Trevira CS Bioactive.  It has all the FR characteristics as the regular Trevira CS, which I posted about recently, but it also has something extra.

The information that I am reading seems to focus mainly on Trevira BS Bioactive in use in apparel (the manufacturer mentions it is “compatible with skin”), so I am not sure the extent of the need for antimicrobial properties in stage curtains, but it certainly is interesting.

Blogs and Forums I have found

ControlBooth.com: Lots of great information on staging, including lighting, sound, scenery (including drapery and other soft goods), costumes, stage management, and much more.  While you do need to become a member (free, quick and easy) to post, you can browse to your heart’s content without becoming a member.

Spotlight:  A blog focused primarily on the theatre scene in the UK.  However, some amusing posts, so fun to read even if you are in the US or not involved with traditional theatre.  I particularly liked this post.

Lets Look Up:  OK…this blog has nothing to do with theatre, rock ‘n’ roll touring, special events…however, it is rather fun so I am passing it on.  Who would have though that photos of ceilings would be so fascinating?  What brought me to this blog was this photo of a theatre ceiling .  It is a gorgeous photo, and I was surprised to find that it was taken at the Kodak Theatre, right here in So Cal (home of the Academy Awards and much more).

In late 2006, we were approached by the tour’s designer.  The designer had a great idea – design the entire set around fabric.  But not just any fabric – the Stewart Family Tartan.  The problem: there wasn’t a Stewart Family Tartan fabric available in the grand scale needed for custom stage curtains – most available tartan fabric is on a scale that would be lost in a large arena.  Despite (or perhaps because) of the challenges, we jumped right in to find a solution.  Here is what we did:

Here is a photo of the finished drapery, installed for rehearsals 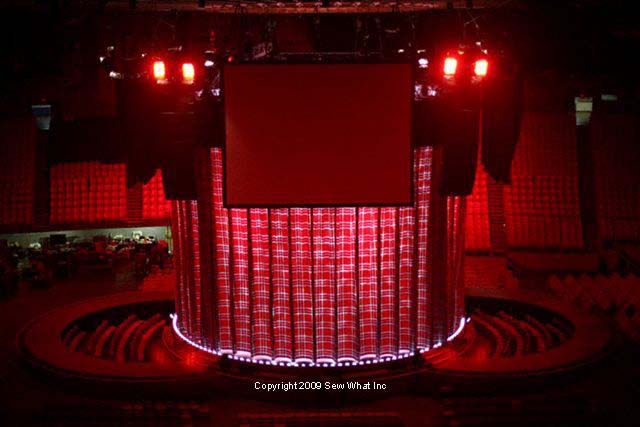 Isn’t this gorgeous and dramatic?

Nice to Meet You

I am often asked how it is that I ended up doing what I am doing, that is being the founder and President of Sew What? Inc. – a Concert and Special Events Softgoods Supply Company.  I usually respond with “wrong place at the wrong time.”  Well, in all honesty it was not planned nor do I think it was preordained.  Rather that it was the result of not having a real job and wanting more for myself than a studio apartment and a diet of cigarettes and peanut butter.

I knew not of digitally printed backdrops and the equipment required to produce them.  Nor did I have any experience in theatrical drapery manufacturing of grand drapes or sharkstooth scrims.  I could not even sew!  I seem to recall that from an early age sewing made me nauseous.  (Don’t you recall the clickety-clack of your mother’s knitting needles while you were trying to watch the Cosby Show?).

My move to California from Melbourne was mostly inspired by some amazing and dedicated roadcrew whom I met in 1989 in Australia.  Steve Gomes, Dave Agar, Bobby Thrasher – just a few of the friendly faces who were touring with Billy Joel on the Storm Front Tour.  I got to meet lighting designer Steve Cohen, and as production driver for the crew and band I had a great gig – traveling the Southern states of Aus with them inspired me.

I would go to America, be an electrican – or failing that possibly a rock star.

Yes – you have my permission to laugh loudly.

So enough of my reminiscing – or there will be nothing for next time.

Fast forward 20 years later….now a stage drape selling, karaoke-loving wife, mother, and seamstress, who is very proud of her Sew What? family – I am contemplating enrolling in the next round of Rock ‘n’ Roll Fantasy Camp.  I am figuring it could only be good to get my “rock and roll” energy out – and belt out a few Meatloaf tunes while I am at it.  If I do, you will be the first to know.  I promise.  (Really).