Previously I did a post titled “Focus On: Traveller Curtains.”  Today, I thought I’d give you a little information on Traveller Track (also known as curtain track).

Traveller track typically consists of a track channel that is either fixed into the roof studs, mounted to a pipe that has been hung from the roof studs, or  suspended by chain directly from the studs.  The channel may be constructed of aluminium or galvanized steel.   Depending on the track model, channel is typically shaped like a box or an I-beam.

Small steel parts called “carriers,” which have small nylon, polyethylene or neoprene wheels (some with ball-bearings) slot into the channel.  For each length of channel, there is usually one larger master carrier and then a number of smaller single carriers.  The curtain is then attached to the carriers (or, as in the case of the pictures below, to a piece of trim chain that is attached to the carrier).   For ease in attaching the stage curtains to the carriers, often a top finish of Webbing, grommets & S-Hooks is specified for traveller curtains.

Master Carrier for Box-Style Channel.  The chain hanging from the bottom is an option called “trim chain.”   In most cases, however, carriers are furnished without trim chain and the curtains are attached directly to the triangle-shaped bit at the bottom of the carrier.

Track is installed as either one-way draw or bi-parting.  For a one-way draw, there is a single continuous length of channel, with a single master carrier at one end.  When the curtain is open, the entire curtain stacks at one side of the stage.  For bi-parting, there are two lengths of channel that cross at the center (typically with a foot or two of overlap), each with a curtain attached.  There are two master carriers, one for each length of track (inserted at the onstage edge of the track).  When the curtains are open, the two curtains are stacked on either side of the stage.

This is just a basic introduction to traveller track.  There are many different factors that determine which track is appropriate for a specific project, including the weight of the curtain, the stage width, and much more.  The best place to start if you are considering purchasing traveller track is to review the track selector guide.

Continuing on the subject of flame retardancy, I thought I’d give a brief synopsis on the flammability of fabric.  Consider the flammability characteristics of different fibers (in their natural state, not factoring in topical FR treatment) may assist you in making decisions on the type of fabric to choose for your next custom stage curtain.

Many synthetic fabrics are, naturally, extremely flame resistant.  When they do burn, however, they will typically melt.  The result can be extremely dangerous if it comes in contact with skin.

Natural fibers typically do not melt.  However, depending on the fiber, some burn more quickly and readily than others.  Wool, for example, is slow to catch fire and may actually self-extinguish.  Cotton, on the other hand, can ignite quickly, with the flame spreading rapidly as well.

Fabrics made of a blend of natural and synthetic fibers can offer the “worst of both worlds,” combining the quick ignition of the natural fiber with the melting characteristic of the synthetic fiber.

Luckily, in many cases, chemical treatments can be used to make many fabrics much more resistant to fire.  However, not all fabrics can be chemically treated for flame retardancy (such as most metallic fabrics).  When in doubt, ask your fabric supplier if the fabric you are considering is flame retardant (or can be treated to be flame retardant), and make sure you get a Certificate of Flame Retardancy when you purchase.

If you’d like to learn more about this topic, I have written an article that is available on our website.

Since I started this blog, one of my goals has been to educate those readers who are new to the world of stage curtains and rigging.  Based on that, I have written various blog posts and included photos and links.  Today I thought I’d point you to some short videos that will show you stage curtains in action.  I hope you will find the videos both educational and entertaining.

Sew What? Inc. has posted several videos on You Tube.  This video shows an Austrian Drape being raised and lowered.  Make sure you turn the sound on your computer when playing the video – I think you’ll like the soundtrack!

We have also included an LED Star Drop that we made for the rental inventory of our sister company, Rent What?  I love the way the lights twinkle and flash – it is really a dramatic sight in a dark theatre or concert venue (again, try it with sound).

Our website has a large number of videos on it as well, showing a variety of custom stage curtains, custom band backdrops, and much more being used by artists as diverse as Lady Gaga, Rod Stewart, and James Taylor (and many more).  Check them out – I think you’ll enjoy them.

Sew What? Travels the World

We’ve gotten some fun photos back from clients from time to time, usually of our drapes used in theatres or concert arenas or special event venues.  I always love to see our custom stage curtains, theatre scrims, and band backdrops in use.  But the photos below are different and gave me a chuckle, so I thought my readers might enjoy seeing them as well… 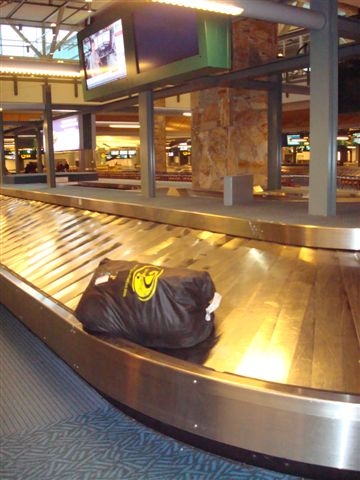 These Sew What bags are usually used for holding drapery – but here on a luggage carousel in Germany, it is apparent that someone ran short on space in their suitcase and decided to try out a Sew What? bag as checked luggage. 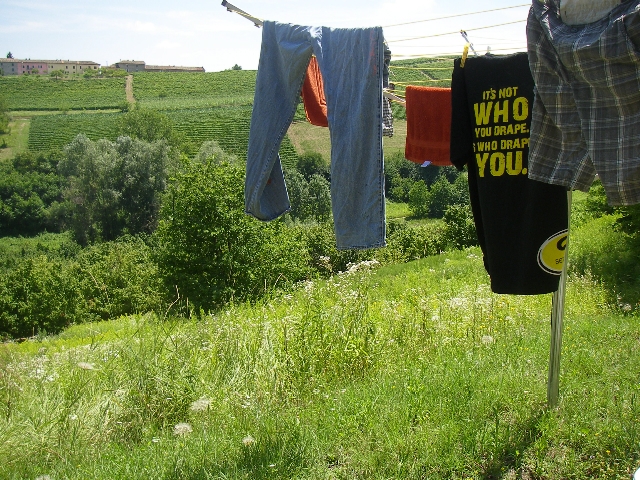 Each year we print a new Sew What? tee-shirt.  This is last year’s shirt hanging on a washing line in Italy.

My, How We’ve Grown

I’ve been reflecting lately on the changes I have seen since I started at Sew What?, as well as the stories I have heard about the early days of the company.  It really is amazing to consider how far we have come in a (relatively) short time.

The business first started in 1992 with Megan Duckett sewing custom stage curtains at night on her kitchen table.  Eventually, Megan quit her day job, and by 1996, Sew What? had grown to the point that Megan was able to rent a small commercial space and hire her first employee, a sewer – Maria, who is still with us today!

As the business continued to grow, Adam Duckett joined the business full-time.  The company moved into a larger (6,000 sq ft) leased space.  We bought a van and hired our first driver (Raul, who is now our Operations Manager).  In 2003, Sew What? Inc. hired its first office employee, Silvia (now Human Resources). 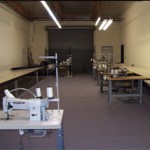 A shot of the sewing shop at our second location

Megan and Adam were constantly focused on growing the company, and so in 2004, they were again on the hunt to find a larger location – but this time to buy.   We bought and moved into our current 15,000 square foot location in early 2005.  We finally had the space to add to our office staff, and today we have ten in the office, including sales, purchasing, accounting, and more.  Our manufacturing staff has grown from just Maria to about 20 employees today. 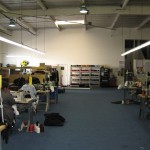 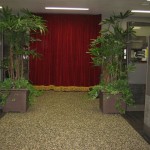 Shots of the sewing shop and office in our current location

In the beginning, everything was handwritten.  Now we use a fully integrated software system that encompasses everything from sales to job production to shipping to accounting, and much more.  We also developed a custom software application to create sewing plans.  Our website has evolved from a simple site built by Megan to a large professionally-designed site that gets a large number of hits each month, and just a couple of months ago, this blog was added.

We are really a family here at Sew What?  Each month, we all get together, celebrate birthdays and company anniversaries, and share cake and memories.  We care about each other, and we care about our customers and vendors, and I think that comes through.  We have customers and vendors that have been with us and supported us almost from the beginning, and that is pretty incredible.  It has been a lot of hard work, late nights, weekends – “blood, sweat, and tears” as they say – but it has been worth it.  That little business that started on a kitchen table so many years ago is now a growing, vibrant and exciting business that is recognized as a leader in its industry.  Who would have thought, all those years ago?